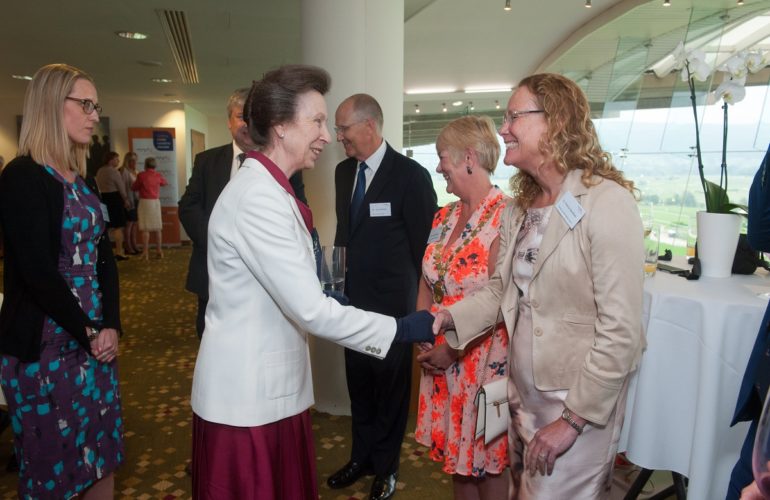 Dorothy House Hospice Care, the Royal United Hospital Bath (RUH) and the MNDA have been jointly recognised by Her Royal Highness The Princess Royal for working together on a project to support patients with the condition. Jointly they have created a role for a new co-ordinator who will better support patients to maintain their independence and quality of life, as well as help their families to cope with life-limiting conditions.

The project was honoured at a reception hosted by the MNDA and held at Cheltenham Racecourse. The three organisations were praised by Her Royal Highness, who is the Royal Patron of the MNDA.

“It was a privilege to be recognised for the positive outcome of the collaborative MND project developed by Dorothy House, RUH Bath and the MND Association.  We were acknowledged for the improved co-ordination of care the shared MND role provided for patients living with motor neurone disease and for the strengthened links between clinicians involved in the care of individuals.  It was also good to hear the vital role of care co-ordination confirmed by the guest speaker, who herself has motor neurone disease.”

When St Vincent’s Hospice opened its doors in Renfrewshire, Scotland, one of the first patients to arrive was Peter McAinsh OBE. An active and healthy man, Peter was diagnosed with MND in December 1993, and very quickly experienced a radical decrease in his physical health and independence due to the deteriorating nature of the condition.

During his time at the hospice Peter decided he wanted to share his experiences and insight into his condition by writing a short book called The Unwanted Companion, One Man’s Journey with Motor Neurone Disease.  Now, nearly 25 years since its first publication, the hospice has published the story digitally for the first time, and it is available to download here.