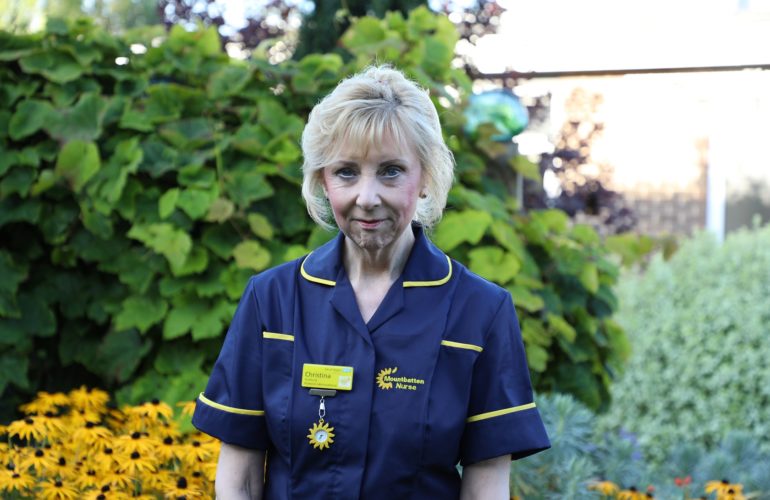 A nurse at Mountbatten on the Isle of Wight has been shortlisted for the national “Our Health Heroes” award and the public are being urged to vote for her to win.

Christina Ginsburg has been nominated for an Outstanding Contribution Award, organised by NHS Health Education England. The public are now able to take part in the UK-wide vote and which will decide whether she will receive the bronze, silver or gold award.

Employed by Mountbatten, Christina is based at St Mary’s Hospital where she acts quickly with hospital and Mountbatten colleagues to ensure people approaching the end of their lives get to the place they would prefer to die, which is often at home, at a nursing home or at Mountbatten rather than on a hospital ward.

Christina was so shocked to receive the news that she deleted the first email notification, thinking it was a hoax. She said: “This award is a delightful surprise! It is important in recognising the unique partnership of Mountbatten and St Mary’s Hospital and the commitment to working together to support and care for as many people as possible coming to the end of their life. We are also committed to supporting families and friends, as how people die lives on in the memories of those left behind. It is a singular honour to receive any level of award that recognises the work of a magnificent team.”

Liz Arnold, Director of Nursing, who nominated Christina said: “We are delighted to hear that Mountbatten Nurse Christina has been shortlisted for this prestigious award and we would certainly describe her as one of our hospice’s – indeed the Isle of Wight’s – ‘heroes’.

“Christina’s passion and enthusiasm for her role is clear for all to see and is one of the reasons the role has been such a success. She works creatively and flexibly to ensure patients and families receive the very best outcomes possible and she always ‘goes the extra mile’.

“Part of the success of this role has been Christina’s ability to form trusted relationships and partnership working between hospital, hospice and community settings, in addition to her breadth of knowledge and dedication to improving the end of life care experience. Mountbatten is extremely proud of Christina and all that she has and continues to achieve, every day, always.”

The award highlights the way Christina has helped patients and their families, including:

The winner will be announced at a ceremony at the Science Museum in London on Wednesday 20 November.