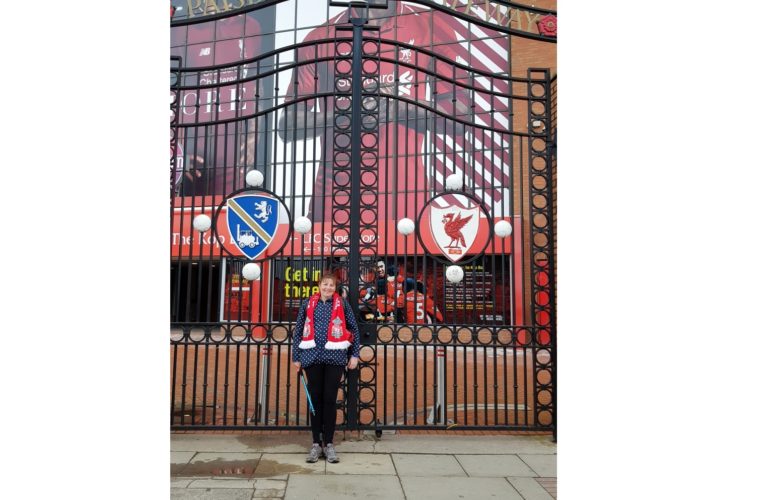 May 8, 2019 | No Comments
Categories: Care and Community Engagement.

A mum has walked 178 miles from Arthur Rank Hospice in Cambridge to Liverpool FC in memory of her son Daniel.

Angela McGrath and her daughter Lorna set off from the hospice towards Liverpool on Thursday 28 March 2019, exactly a year after Daniel received his diagnosis. Angela explains:

“My world shattered when I lost my beautiful son Daniel to cancer. He was 21. He, his sister and brother were my everything. Daniel was such an inspirational person and still is. His strength and courage were mind-blowing. He never let anything get him down.

“Daniel had been diagnosed at age seven with ADHD. Even that never stopped him trying everything. He was always happy and making the best of things. He loved his brother Kane and sister Lorna very much, and if you saw one of them, you’d be sure one or both of them would be close by: my three little musketeers.

“We went through a lot with Dan and always came out stronger for it. Whenever I felt like giving up, he would never let me be down for long. It was always: ‘Come on mum we can do this, just have a laugh!’”

The whole family had strong connections to Liverpool, having lived there until Daniel was 10 years old.

“One of the first things Daniel did when we got to Cambridge was tell everyone Steven Gerrard was his dad! But no one could stay mad at him for long. His cheeky smile would appear and everything was good.”

Daniel thrived in Cambridge, joining the boys’ brigade and even Histon hornets’ football club. In his teenage years he moved out of the family home but always stayed in close touch with his family.  He married Rebecca in August 2017 and was overjoyed when his little girl Millie came along. He doted on “his little princess” and was so excited and proud to become a dad.

Sadly, when his daughter was just four months old the family realised something was wrong. Daniel had gone off his food which was not like him at all, and he eventually went to the doctor. On 28 March 2018, he was diagnosed with stomach cancer. Angela explains:

“I never dreamed for a moment about how bad it would eventually be. It turned out he had an ulcer and behind it was the cancer. When I was told it was like someone ripped out my heart, I screamed and couldn’t stop crying. I stayed with Dan that night and held him as he sobbed. I prayed to God to take me instead. My beautiful boy was dying and there was not a thing I could do about it.

“He was in and out of hospital until May and then he never left. He was eventually moved to Arthur Rank Hospice, which I had been dreading. But the staff and volunteers there were fantastic. Even in his last weeks Dan never stopped laughing and joking.

“In his last days family came from all over to see him. We were with him when he passed, and I sang “Danny Boy” to him, as I always sang that to him when he was little. He knew he was going that day and told me he wasn’t scared as his nan (my mum) had come to collect him and take him to heaven.”

Daniel always retained his love of anything and everything Liverpudlian. He got on particularly well with one of the hospice’s healthcare assistants, Sharon, who is from the City and was one of the members of staff caring for him on the Inpatient Unit at the time.

It was Daniel’s idea that his family take on the challenge of ‘Walk 2 Liverpool’.

“One of the last things he asked me to do was raise funds for the hospice. It was his suggestion that we could walk from Cambridge to Liverpool.”

In the months before the walk began, Angela’s husband planned a route and she started training with increasingly greater distance walks. She and her daughter Lorna became more excited and nervous as the morning of the walk approached. As part of their efforts to fundraise, the McGrath family even managed to secure a signed Steven Gerrard photo to auction on Arthur Rank Hospice’s Ebay store.

On the morning of 28 March 2019, their friends and family gathered together at the hospice to wish them luck and wave them off. In a stroke of luck, just as they were leaving, Sharon – the same healthcare assistant that Daniel had got on so well with the previous year – was arriving at work and gave them a big good luck hug.

Unfortunately, at the end of a 25 mile walk to St Ives on day one, Lorna had to pull out due to pains in her legs. Angela carried on alone.

“I knew it would be hard, and it was. I spent the first three days crying most of the time. But on I went, the pain in my feet and legs was unbearable at first but the thought of Daniel being in pain all the time with his cancer and not complaining kept me going.

“I carried a photo of Daniel and would talk to him asking him to give me the strength to carry on some days.  I would start off early in the morning and finish early evening. The closer I came to Liverpool the harder the walking became, but I found it easier too as I was used to the pain and loneliness.”

After seven hard days of walking, Angela arrived at Liverpool FC’s stadium on the afternoon of Wednesday 3 May. She says:

“As I arrived at Anfield, my family was there to meet me, and I am so proud of myself for keeping my promise to Daniel.”

Daniel’s younger brother Kane now volunteers at one of the hospice’s shops. Daniel’s sister Lorna explains that the whole family is passionate about helping the hospice make every moment count for others like them:

“Arthur Rank Hospice was amazing, making Daniel’s last days as comfortable and happy as possible. We want to raise as much money as possible for this amazing hospice to carry on looking after people in their last days.”

Lorna is pledging to do the walk another year, but so far the mother-daughter duo have raised £1,813.06. The family would like to thank 254 Medical Regiment who helped with advice and finding Angela overnight shelter on-route.