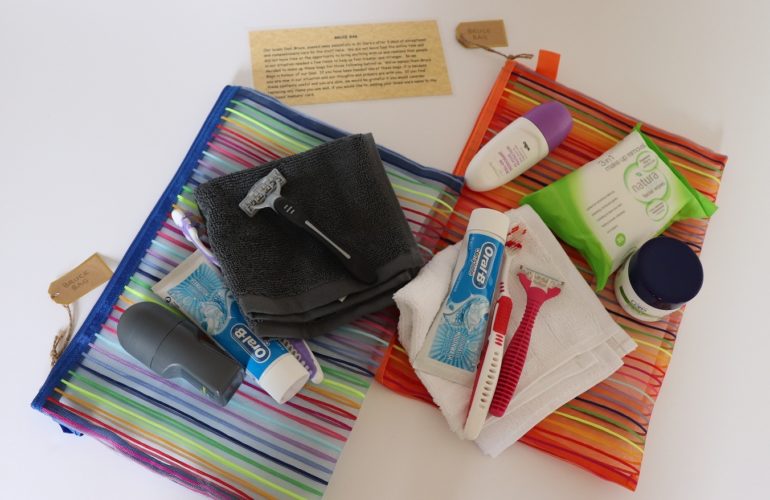 The BruceBags created for patients’ relatives at the hospice

St Clare Hospice in Essex is launching a new campaign to share stories of the care patients and their family have received in a bid to dispel the myths surrounding hospice care.

Preconceptions of hospice care often prevent people from accessing support when they are diagnosed with a life-limiting illness. To help address this St Clare has launched #MyHospiceAndMe, which will share the experiences of people who have benefitted from the hospice’s care, and tell the stories behind items they have created that express how they feel about the hospice, or that help others in similar situations to their own.

One example are the spare washbags the hospice now has on hand for relatives of patients who are staying on the Inpatient Unit. These wash bags, named BruceBags, were created by sisters Trish and Gill in memory of their father Bruce.

“St Clare is such a joyous place that we wanted to give something back” Trish said. “The nurses, doctors and volunteers gave us so much at such a difficult time in our life. It was only once we’d been there with dad that I learnt what a great job hospices do. Our heartfelt gratitude goes out to everybody at St Clare.”

In July 2018, Trish had travelled down from Shropshire to visit her father, who was very ill in hospital. She was staying with her sister Gill for a few days, and was intending to travel home on their dad’s birthday.

“On my way home I was calling in at the hospital to see dad to give him his card and present, but I didn’t make it home. When I got to the hospital, he’d been transferred to St Clare Hospice.

“So I rushed over to the hospice, and the moment I walked into the Inpatient Unit I could feel the calm, the kindness and compassion emanating from the place – honestly, you could touch it.

“I felt my stress levels coming down right away, and one of the nurses took me straight in to see dad in his room.

“Dad was awake and he recognised me, which I was delighted about. He had Alzheimer’s disease but he did seem remarkably lucid at that moment, although he could not speak. The nurses were getting him settled in and I went to see the doctor, who said they thought he might die within a few hours.

“I phoned Gill and she left work immediately. Dad was in a coma quite soon after he was admitted but Gill was able to talk to him beforehand. By then he was unable to open his eyes but he raised his eyebrows at the sound of her voice.  My brother Dave, who lives in Leicestershire, had seen him in the hospital as well, just before he was moved to the hospice.

“Dad went in on the July 9 (his birthday) and died on the 11th, and we didn’t leave his side. We slept in his room with him on sofa beds.

“The people at the hospice were wonderful; they brought us toast in the morning and an evening meal. They looked after us every bit as much as they looked after dad. They really made us feel like they were taking the load off us.

“When it seemed that dad really was slipping away, we asked the nurses if they could contact a chaplain for him.  They took some time and care for this, and found us the wonderful Rev. Lynn Hurry, who came despite having a hip operation scheduled the next day.  As with the hospice staff, she brought great comfort not only to dad, but his girls as well.  A perfect example and testament to the holistic approach of St Clare.

“If I hadn’t have been on my way home I wouldn’t have had my suitcase containing a toiletry bag and clean clothes – which my sister and I both used during our stay. It occurred to us that other people in our situation needed a few items to help them feel fresher and stronger. So we decided to make up some toiletry bags – some for men and some for women.

“Because of our experience, we thought maybe we could help someone else. And because dad’s name was Bruce we wanted to name them after him, so we called them ‘Bruce Bags’.

“We left a card in the bags explaining our story, and why we made them – asking people who used them to replace what they have used if possible, so that they are there for the next person. We also provided a little card for people to write their loved ones’ name in, if they wished.”