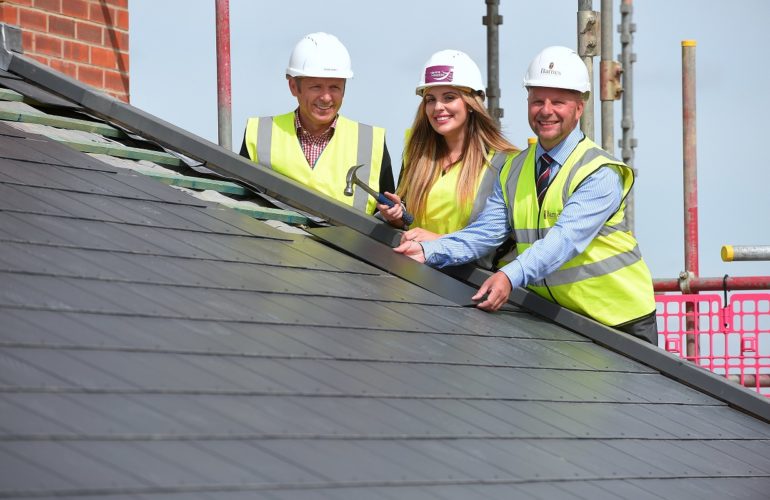 A major milestone has been reached in the building of a new hospice for Essex. Lydia Plews, whose mum was cared for at Fair Havens Hospice before she died, explains why the new facility will be so important for local community.

This week the last piece of the roof was fixed in place at the new Fair Havens Hospice in Southend, part of Havens Hospices. The ‘topping out’ event was attended by staff and volunteers who, in spring 2020, will be caring for patients in this building.

The term ‘topping out’ refers to the installation of the final piece of the roof, meaning the building has reached its maximum height. The honour of fitting the final tile was given to one of the charity’s fundraisers, Lydia Plews. Her mum Mary was cared for by the existing Fair Havens Hospice before she died in July 2012, eventually inspiring Lydia to apply for a job raising money for the charity.

Mary, 54, was a nurse at Southend Hospital and had worked with many of the Care Team at Fair Havens. Lydia says: “I think if we knew more about Fair Havens earlier, we could’ve persuaded her to [come to] the hospice and may have had a few more weeks with her as the doctors and nurses at the hospice were brilliant.

“It was tough for us, but for the Care Team too. Many of them knew mum but for her it was a comfort to know she was being looked after by those who knew her best. She was absolutely clear she didn’t want to die at home so to be at the hospice being cared for by a trained palliative care team – who involved us in everything – was just amazing.

“Mum died at 6.10pm on Monday 9 July 2012. We were all there and Fair Havens Hospice helped make this happen.

“Before mum became ill, we remember her talking fondly about Fair Havens when they announced they needed a bigger hospice to care for more people. She talked clearly about the importance of the hospice and that has never left us.

“We had a really positive experience at Fair Havens Hospice, and we feel fortunate that mum managed to get a bed. But to think about those 11 patients every month who can’t get a bed because there isn’t room is heart-breaking. This is why the new Fair Havens is so important.”

“It’s been a real privilege to be part of this topping out ceremony. We are nearly at the point of completion. I am so pleased to be part of this project and take great comfort in the fact that we’ll be able to care for twice as many families, just like mine.”

‘Topping out’ is a significant development as it means that the hospice is now officially watertight so work can start on the inside of the building, creating rooms for the patients. Thanks to increased Day Hospice and Wellbeing support, the hospice will be able to care for twice as many patients as it currently can.

The building was designed by LSI Architects and the project is being managed by Barnes Construction, which has experience in building healthcare environments having worked on Arthur Rank Hospice and the East Anglian Children’s Hospice.

Mark Hart, Joint Managing Director at Barnes Construction said: “As the focus shifts to the interior, the project has reached its busiest stage with over 70 people covering a range of trades from electricians and plasterers, to carpenters and glaziers, now on site at the same time, all working together so the hospice can start caring for patients in spring 2020.”

The project has cost £17.2 million and there is just £350,000 left to raise. The charity has launched its ‘Power of a Pound’ campaign, stating that if everyone in Southend, Castle Point and Rochford donates a pound each, this target will be met.