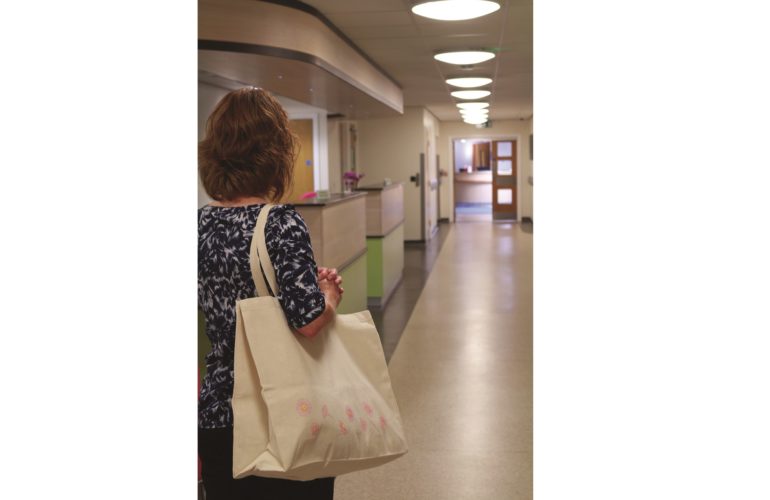 Receiving the belongings of a family member or friend who’s died is difficult enough, but when they’re given out in a plastic carrier bag it makes it even harder. We spoke to two nurses leading initiatives that make this experience far more dignified.

Laura Chesters, In Patient Centre lead at St Luke’s Hospice in Sheffield, spotted this issue in her first month on the hospice ward. “I saw a relative leaving, it was somebody who’d been here for quite some time and she had a lot of stuff. She was just walking off the ward with clear plastic bags full of property and it just didn’t sit nicely with me at all. I thought, we go to all this effort to maintain people’s dignity, give them everything that they need, and then that’s how they leave? I really didn’t like it.”

Laura consulted with the hospice’s marketing team as well as other staff, and they considered various options including paper bags with rope handles similar to those used by department stores, however they decided against these for not being waterproof or particularly environmentally-friendly.

Instead they arrived at bags made of canvas, a sturdy, sustainable material that can also be re-used. “We wanted something that we had designed” Laura explains, “so the bags have daisies on them which we’ve taken from the Celebration of Life event we do every summer. The daisies are in St Luke’s colours but we haven’t written the name anywhere so the bags can be used again, just like canvas shopping bags.”

The bags also have built-in pouches for small items like jewellery or watches.

“They’ve gone down really well” Laura says. “Relatives have made comments about how lovely they are, and staff think it’s a really good idea. One of the other key things we found is that if we see somebody in the reception area with one of these bags it’s a visual sign that tells us that person has just lost somebody, so we can offer a bit of extra support if they need it, and change the language we use around them, and our mannerisms.”

Sharon Lambie, Clinical Nurse Specialist in Palliative Care, has spearheaded a similar initiative at Glasgow Royal Infirmary. She’s found that nursing staff at the hospital feel a lot more comfortable handing over belongings now. “The whole experience is much nicer and more personal. They also feel that they are taking care of the patient’s belongings.”

“It can be difficult for nurses handing back belongings in a carrier bag as it can feel very uncaring, undignified and sometimes embarrassing” she adds. “We often relate it to putting rubbish out in plastic bags before they go into the bins, and seeing rows of plastic bags lined up often reminds you of rubbish waiting to be put out.

The bereavement bags they use are made out of cloth, and come with a separate organza bag for things like jewellery, along with a condolence card. These are now being used across all acute areas throughout NHS Greater Glasgow and Clyde.

Laura explains that the practical aspect of switching from plastic to canvas was very easy. A simple Google search to suppliers she spoke to about design. “They sent us a couple of samples and we took it from there. The biggest issue was storage, because we had to order a minimum of a thousand. But once we solved the storage aspect it was really easy. It also wasn’t as costly as we thought it would be. Obviously you can get the rolls of clear plastic bags really cheaply, but we found that if we did a bulk buy of a thousand bags they would probably last us between three and four years, and when you split that cost it’s not a lot at all.”

Cloth bereavement bags are also in use at Derriford Hospital in Plymouth and The Shrewsbury and Telford Hospital NHS Trust, and both Sharon and Laura say there’s no reason why they can’t be rolled out more widely. “In many ways it is such a small, simple thing but it makes such a big difference and it would be great if it was available throughout the UK” Sharon says.

Laura adds, “with plastic bags, it feels like they’re taking their things home in a bin bag. Whereas this way, because it’s in a nice bag it’s almost like gifting it back to them. It just makes it feel a little bit more dignified, and a bit more humane.”