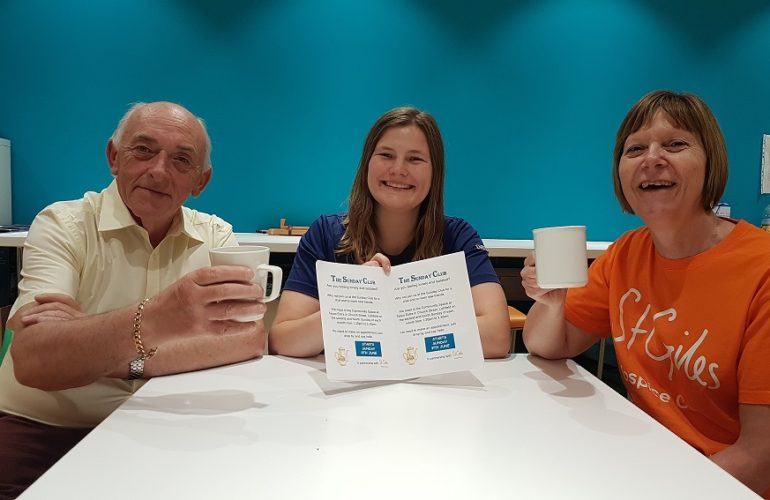 St Giles Hospice in Lichfield has just launched a club for people who find Sunday the loneliest day of the week.

John Taylor began attending the hospice’s weekly Bereavement Help Points after his wife died and said many of the members of the group had experienced the same feeling of loneliness on a Sunday. He then came up with the idea of starting the club.

“I’ve been attending the help point for several years and have spoken to lots of people who have a week filled with activities and things to do, but when it comes to Sunday often feel alone,” he said.

“It can be hard to fill the day if you don’t have family or a partner so Sunday can be the hardest time of the week to get through.

“The idea of the Sunday Club seemed a great way to bring people together for a cup of tea and a chat in a relaxed environment.”

Finding a room which was open and easy to get to on a Sunday was a challenge until John decided to ask Ellie Thomas and Gemma Davies of the community team at Tesco, which kindly supports the Bereavement Help Point, to see if they would be willing to help. Tesco Community Champion Gemma Davies said the store were delighted to help by providing the room.

“The Sunday Club is a brilliant idea and we are happy to help John and the group by giving them a room for the afternoon,” she said.

“We’ve already seen the success of the Bereavement Help Point on a Wednesday so it was another great way to use the room throughout the week.”

“Feedback from all of the Bereavement Help Points is that Sunday can be a difficult day to be alone so it’s great that John has started the group,” he said.

“Hopefully it will the beginning of something which will grow and we’ll do everything we can at St Giles to support it.”

The Sunday Club is open to anyone who is lonely and would like a chat. It takes place in the community room at Tesco from 1.30pm-3.30pm every second and fourth Sunday. The Bereavement Help Point runs every Wednesday. For more information visit St Giles Hospice