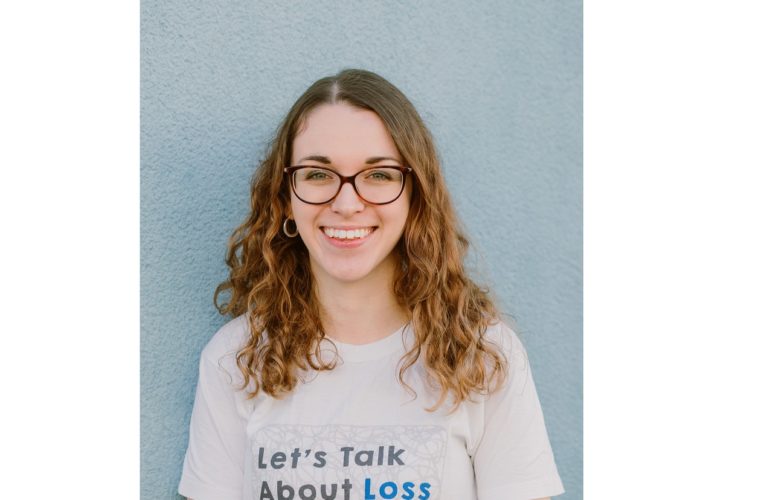 Photo of Beth French by Let’s Talk About Loss

Let’s Talk About Loss is a support network for people aged 18 to 35 who are bereaved. Founder Beth French tells us why young people need tailored support, and how Covid-19 is shaping the grief of a generation.

Beth was 18 and about to start university when her mother was diagnosed with cancer.   It was, she says, a “very strange time” as she was preparing for an exciting period in her life while dealing with her mum’s illness. When she died two years later, it left Beth feeling confused and alone, as apart from her siblings she didn’t know anyone around her age who had lost a parent.

As a way of coming to terms with her feelings she started writing, and eventually posting blogs on social media. “It was quite scary letting people see how I was feeling, but I’ve always been a believer in being open rather than trying to bottle things up” she says. “It was really cathartic to publish those blogs, and they resonated with loads of people. It turned out that I did know lots of people who had been bereaved, it’s just that we’d never spoken about it before. We were all struggling alone and that really troubled me.  So I thought, if we’re all feeling alone, why don’t we meet and feel alone together?”

Beth started running monthly meet ups and Let’s Talk About Loss was born.  The first event took place in 2018 in Nottingham, where she was living at the time; there are now 23 meet up locations across the UK. Before each event, attendees are invited to join a closed Facebook group to get to know each other. “It creates a bit of a sense of community, because it can be really scary to walk into the bowling alley or bar we’re meeting in if you don’t know anyone” she says.

Run by volunteers who are bereaved themselves, the purpose of the meet ups is for people to make friends with others who’ve had similar experiences. “We aim to sit alongside professional grief support like counselling, and provide friendship and peer support” Beth explains. “It’s really about connecting people with others who understand their situation. People don’t just talk about their grief, from the outside it looks like a group of friends laughing about lots of different stuff. But the idea is that it’s a safe space so that when someone does talk about it, everyone knows what to say rather than it be awkward.”

Beth says that it’s important for young people to have dedicated support for their age group. “Grief is so unique and complex, and I don’t in any way want to suggest that it’s worse for anyone in particular, but that period of your life is so transformative – you’ve got all of these big things happening, whether it’s your first job, moving out of home, or meeting someone who might become a life partner. When you’ve got all those big life events happening, to not have someone special there to support you is difficult. I got married last year and not having my mum at my wedding was really significant for me.”

“The other aspect is that once you get into your 40s or 50s you might find more people in your friendship group who have started to experience bereavement, so you can share that with them. Whereas when I was bereaved at 20 I felt like the only one.”

Another obstacle, Beth says, is that young people aren’t good at talking about their feelings, with social media partly to blame. “When I’m catching up with a friend I’m not phoning them anymore, I’m texting or messaging them on Instagram. Social media is a great thing in many ways, and especially in the grief community as there are lots of fantastic things online which are really helpful but we’re losing the art of conversation and for young people to be able to sit down and talk about something emotional and very difficult in person.”

“This is what we try to keep alive with the meet ups, because it’s all well and good putting out a Facebook post to remember someone, but nothing can compare to when you’re sitting face-to-face with someone and can really bare your soul.”

For the time being their face-to-face meet ups are on hold because of Covid-19, but they continue to run virtually. Naturally, the pandemic has been a big part of their conversations. “It’s been really difficult for people bereaved at this time because death has become much more part of the national discourse, but not in a particularly personal way” Beth says. “So much has been dominated by statistics and death rates. That’s really hard for someone who’s just lost their sister for instance, because she’s not a statistic, she’s a real person they had a connection with. However we’re talking much more openly about health, life and death now, and that is helpful for everyone regardless of their age.”

The pandemic has led to a strange paradox – on one hand encouraging conversations on the otherwise taboo subjects of death and dying, while on the other, people who have lost someone to a cause other than the virus are feeling left out. “We’ve seen a lot of young people joining our group, many of whom have been bereaved to Covid, and it’s fantastic that they’ve found us and want to talk about their grief. But many who have been bereaved to other things have this very unique feeling that their grief is being overlooked because it’s not Covid grief. The headlines are so dominated by it that we’re forgetting people are bereaved everyday to lots of different things.”

Like many experts, Beth believes this will have long-lasting effects. “The impact this time has had on those early stages of the grief process will be remembered for a long time. For me, it was both my mum’s birthday and death anniversary in lockdown, so it was a shame I wasn’t able to see my family but next year I will, so it was just a small blip in how I’m coping with my grief. But for someone who has just been bereaved, those first few months have been completely different to the grief of those bereaved at any other time.”

“I remember when we were first bereaved we had people coming to the door every hour.  There’s so much love poured out during those times and people bereaved during the pandemic will have missed out on that. We know that people are the most supportive really early on, when it’s fresh in their mind. Then they go back to their normal lives and the support gradually withdraws. People who haven’t been able to get that support straight away still might not have it further down the line, because there’s this incorrect assumption that when it’s been a year, they’ll be over it.”

“I worry about what this means for someone’s grief journey and how it will impact them.  I just hope they’re able to find places like Let’s Talk About Loss, where there are people who can say “hey, I get it. I know exactly how you’re feeling. Let’s support each other through this.””