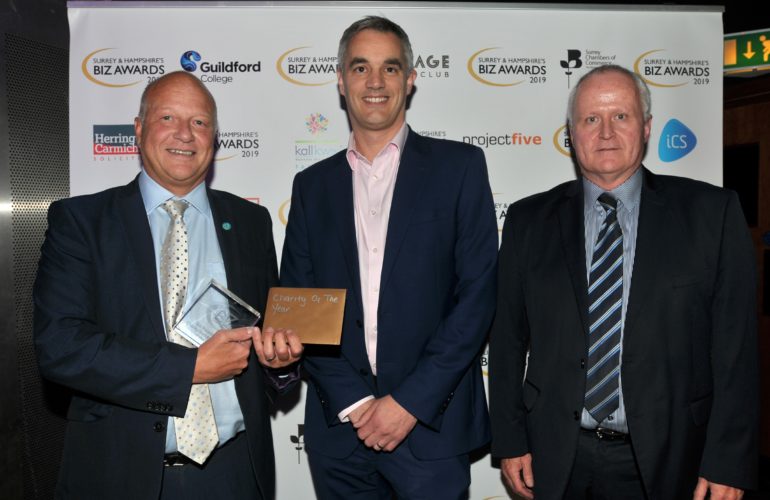 May 17, 2019 | No Comments
Categories: Care and Community Engagement.

May has proved an eventful month for Phyllis Tuckwell Hospice Care as its staff, volunteers and supporters gathered together for a thanksgiving service to celebrate its 40th anniversary. The hospice has also been awarded ‘Charity of the Year’ at the 2019 Eagle Radio Biz Awards.

The thanksgiving service was held at St Andrew’s church in Farnham, and was led by Phyllis Tuckwell Chaplains Jill Thornton and Sue Lattey.

Chris Tuckwell, President of Phyllis Tuckwell Hospice Care and son of the Farnham mother who the charity is named after, spoke about how it was founded and the hospice’s early days. Afterwards the hospice’s Chief Executive Sarah Brocklebank talked about how the charity has developed over the last 40 years and now offers a wide range of supportive and end of life care services across the whole of West Surrey and part of North-East Hampshire.

The service also included a ‘procession’ of staff and volunteers, each representing different teams within the charity, who brought to the front items which symbolised the work they do. From blankets and aromatherapy oils to laptops and collecting tins, these items illustrated the many different roles within Phyllis Tuckwell, and how they all combine together to create the unified charity that provides care for local patients and families.

The service was attended by the Mayor of Farnham, David Attfield, and the Mayor of Waverley, Denise le Gal, along with over a hundred supporters, including many who were involved in the early days of the hospice’s history, with music provided by Shuffletunes choir.

“We are delighted to win such an important award in our 40th year,” said Tony. “Every day we support over 250 local patients, relatives and carers – in their own homes, in the community, at the Hospice in Farnham and at the Beacon Centre in Guildford – through medical and nursing care, therapies, counselling, social work advice and practical support.

“It’s really wonderful for that work to be recognised at an event such as this.”

To find out more visit Phyllis Tuckwell Hospice Care and its 40th anniversary exhibition schedule which will be touring West Surrey and North-East Hampshire throughout the year.