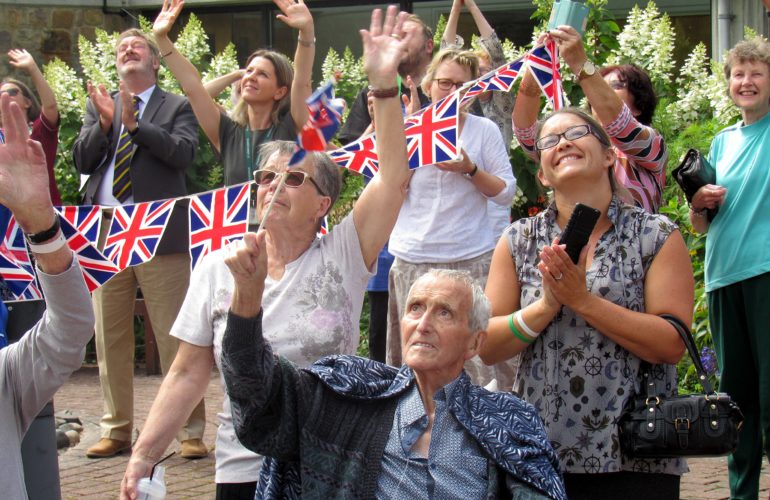 A hospice patient has been treated to a special flyover by two Royal Air Force helicopters.

Bob Pickles, a former chef for the RAF and currently a patient at St John’s Hospice in Lancaster, was treated to the show after a chance conversation Stuart Hosking-Durn, Head of Resilience and Patient Flow at the Royal Lancaster Infirmary (RLI). Bob told Stuart  about his time working for the RAF  and how he would love to feel part of the air force again. The comment got Stuart thinking about how he could make this a reality. He said:

“It was lovely to meet Bob and his family and after I left them I got to thinking about what I could do to help in a small way. I appealed to a few groups on social media to see if anything could be done. I never expected the amazing response from all corners of the RAF community, past and present.”

On the afternoon of the flyover the skies began to thunder as two RAF Chinook helicopters flew over the hospice just for Bob, as a result of the request from Stuart. Hospice staff, volunteers and patients gathered outside and cheered as the huge aircraft passed overhead.

“What an honour to be involved in something like this. You could see how much it meant to Bob and his family. It is a great example of what hospice care looks like, nothing is too much for our patients and people routinely go the extra mile to make wishes like Bob’s come true. We have had weddings, anniversary parties, visiting livestock, but never an RAF flyover! It is just another unique day at St John’s Hospice!”

As well as the flyover it was also arranged for a serving RAF Flying Officer to visit Bob in his home with souvenirs, two airmen will be making a special trip to talk to Bob in the coming days, and there may well be other surprises in store too.

“To see the big smile on Bob’s face today as he proudly waved the Union flag was such an honour. To see the RAF community, old and new, come together like this is inspiring. It is a great example of social media in action for the greater good!”

There has also been a great response from the Lancaster and Morecambe branch of the RAF Association. Welfare Officer David Hodgson said:

“The RAF Association is all about friendship, and once you have served in the RAF you are a friend for life. We knew a Flying Officer was coming to visit Bob this evening, but we were asked if anyone could go and spend some time with him at the hospice before he goes home. I was delighted to oblige and I have spent the morning getting to know Bob and his family and watched the flyover with them, and it was an absolute honour and a privilege.”

Bob’s wife Mary and daughter Eloise have been at Bob’s side while he has been staying at the hospice. Eloise  commented:

“After meeting Stuart, I messaged him just to thank him for spending that time with dad, I never expected it would end with something as wonderful as this. It is quite overwhelming and such a lovely surprise, I cannot quite believe it. Everyone at the hospice has been great and now dad is coming home for some well-earned rest.”

Bob had one word that summed up his experiences: “terrific”.