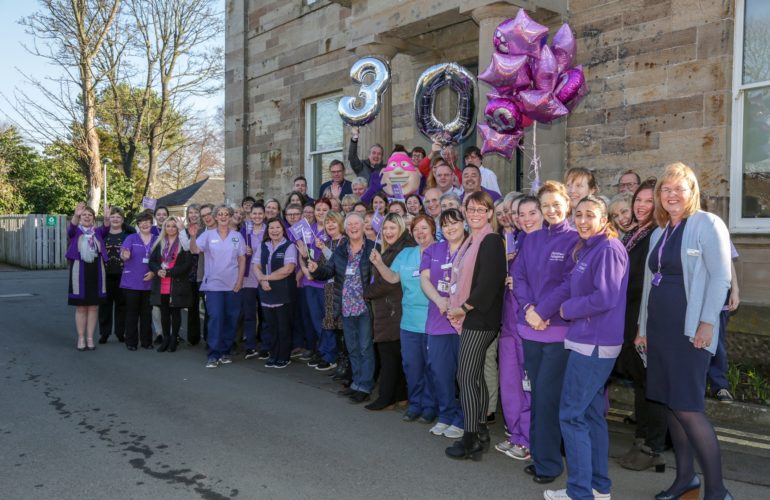 Ayrshire Hospice in Scotland has celebrated its 30th anniversary by paying tribute to its employees, volunteers and fundraising supporters.

The hospice’s Chief Executive Mandy Yule, spoke about the continuing support of the kind-hearted Ayrshire public and stressed their importance to the hospice. She said:

“As we mark our 30th year, our message to the wonderful people of Ayrshire is, thank you. We wouldn’t be able to deliver the level of care we do if it wasn’t for your support.

“We have an incredible group of volunteers and fundraisers across Ayrshire – some of whom have given their time for over 30 years – and without their efforts, the hospice simply wouldn’t be here. Because of your efforts we have access to some of the best palliative care treatments available allowing us to give our patients comfort and quality of life.”

The hospice officially opened to the public on Friday 15th February 1989, however its story actually begins six years earlier, when a group of committed citizens dedicated their time to form a Trust with the goal of raising the necessary funds to open a hospice in Ayrshire.

After the initial fundraising target of £400,000 was met within 21 months, the next task was to find a suitable location. The site was identified after an exhaustive search throughout Ayrshire and building work began in 1987. At the same time, the hospice service was launched with the appointment of two home care nurses.

“We have been privileged to give thousands of patients and their families the care and support they need, both at the hospice itself or wherever they have lived in Ayrshire over the last 30 years and we take great pride in that”.

To help mark the significant anniversary, a special memory tree where people could leave their own memories of loved ones or reflections of the hospice was part of a week-long roadshow at a local shopping centre.

“We never take the compassionate and continued support of the hospice by the people of Ayrshire for granted. The memory tree has given people the chance to leave their own memories of loved ones or a message for the hospice. The heartfelt messages that have been left really capture the true meaning of hospice care and the support we have been able to provide our patients and their families with over the last 30 years. It has been very touching.”

The memory tree will now grow as part of an anniversary exhibition within the hospice over the coming weeks.