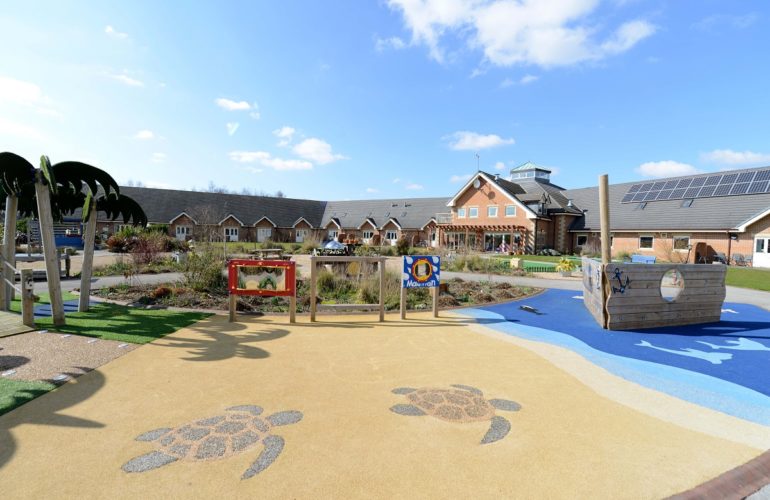 May 24, 2017 | No Comments
Categories: Community Engagement.

Since Saturday the whole centre, retailers’ windows and even the staff themselves have been dressed in purple and will be staying this way throughout Children’s Hospice Week until Sunday 28 May.

Bluebell Wood is the only hospice in South Yorkshire supporting children and young adults with life-shortening conditions.

In March Lakeside customers voted it for to become the shopping centre’s charity of the year, and staff are taking part in numerous events to raise money for the hospice over the next 12 months.

In June the shopping centre will be encouraging people to wear the most unusual shoes they can find in support of Shoesday, and Bluebell Wood fundraisers will also be at the centre on 18 June when it holds a Strong Man event for Fathers’ Day.

Teams from Lakeside are also planning to take part in Bluebell Wood’s Dragon Boat Race in August as well as their “Fire Walk” in November.

Lakeside has so far raised £14,000 for the hospice with its monthly Bag it for Bluebell Wood collection days where customers take along bags of unwanted clothes, toys, books, CDs, and anything that can be re-sold or recycled to generate funds for the hospice.

“We are delighted that shoppers chose us as Lakeside Village’s charity of the year and are really impressed at the number of fundraising events the centre has already taken to its heart. Every penny raised helps to make a big difference to families facing the toughest of times, enabling Bluebell Wood to offer a wide range of services to children and young adults both at the hospice and in family homes.”

“We are thrilled to have Bluebell Wood as Lakeside Village’s official charity of the year for 2017. I know their motto is “living with love and laughter” and we are certainly having lots of fun raising awareness of the fantastic work they do and helping them raise much needed funds so that families can make special memories together.”

Bluebell Wood’s initiatives have been recognised by the Institute of Fundraising. Last October they held a “Soapbox Derby” inviting teams to drive over a bumpy 500 metre downhill course in hand-built racing cars made from baths, bicycles and wheelchair parts. It was one of Bluebell Wood’s most successful events with 3,500 people attending, and has been shortlisted for the Best Use of Events Award at the Institute’s annual awards event.