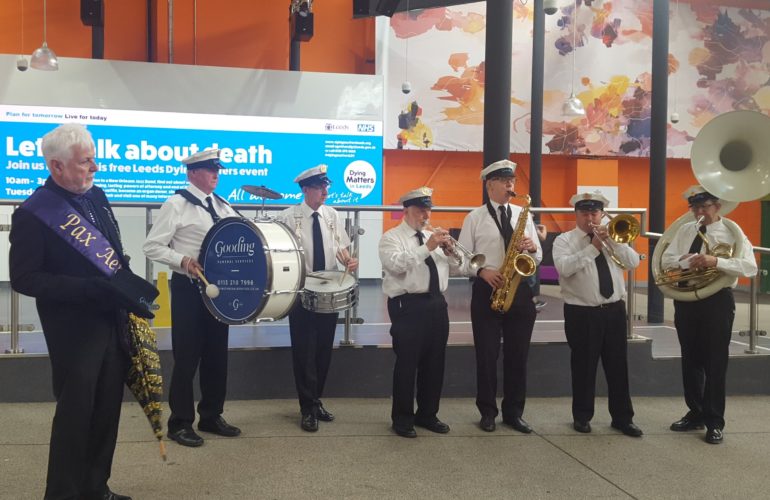 We continue our focus on entries for the Dying Matters Award that made the long list, today looking at the Leeds Dying Matters Partnership, led by Leeds City Council.

The events were also designed to support health and care professionals and volunteers to engage their clients around planning for the last years of life.

On May 15, Leeds Kirkgate Market in the city centre had stalls from a variety of local organisations including hospices, the Leeds Bereavement Forum, Leeds Libraries, Museums & Galleries and Macmillan Cancer Research.

There was a film screening, performances by a jazz band and a gospel choir, poetry read by stallholders and members of the public, and the play Is your death as good as mine, performed by Leeds Teaching Hospitals NHS Trust staff.

After the event the stallholders said the venue had been great for interacting with the public. They liked the space and felt that it attracted passing trade, with lots of people stopping to find out what was going on, and the wide variety of stalls led to good conversations. The choir and band drew people’s attention, with the band parading around the market to drum up interest. Visitors to the event said they would be sharing information with friends and family, and would be taking actions such as writing their will.

Footfall on the day for Kirkgate Market was over 23,000, up by about 4,000 for a normal Tuesday, showing that a large number of people were interested in the event. It was also featured in a news broadcast by the Yorkshire Voice online TV company.

This year the partnership introduced a community grants scheme for local organisations to run their own activities. These included Carers Leeds, older people’s networks, Cafe Leep run by people with learning disabilities, the Syrian Community of Leeds, Leeds University Union and Caring Sharing Your Loss (CASYL).

These events were attended by more than 600 people from a broad range of backgrounds. When asked about their outcomes, the organisations responded by saying they planned to build on them by offering members more opportunity to talk about dying and end of life in the future, including running more cafe-style drop-in events,  supporting more students who have suffered a bereavement while at university, and setting up a bereavement committee for the local Syrian community.

The combination of the city centre event, local events and mass media led to their most successful Dying Matters campaign to date, reaching more people than ever before.

The winners of the Hospice UK awards will be announced on November 27 at the annual conference.