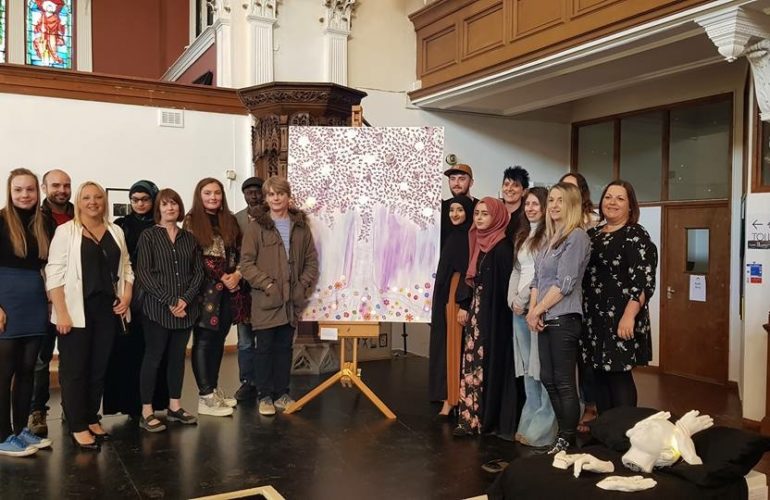 As we continue our focus on entries for The Innovation in Dying Matters Award that made the long list, today we look at The Art of Stimulating Conversation Project led by East Lancashire Hospice

The Art of Stimulating Conversation Project – which began in January of this year – aimed to generate discussions among members of the public about illness, death and dying using the arts to break down barriers in a sensitive way.

Rachel Shovelton, End of Life Care Educator at the hospice, led an interactive workshop for the students which included a discussion about why we are a death-denying society and featured thought-provoking ideas on questioning our own end of life care wishes, as well as real life experiences including a personal story about the death of a 12-year-old girl.

Following the workshop, students were given a brief to produce something on the subjects of death and dying using the arts.

Participants completed self-evaluation forms including the question ‘I have had conversations about illness, dying and bereavement’. Results shown in the graphs supplied, in summary, showed that before the workshop an average of 42% stating that they had not had conversations. After taking part in the workshop 100% said they would now.

Students were given a brief to produce something on the subjects of death and dying using the arts. They produced a range of pieces, from performing arts to painting, sculpture to sand art. All the pieces were exhibited in events held during Dying Matters Week. There was also a collaborative event hosted by the hospice in June which was attended by 1,200 people.

The project leaders contacted two local businesses – Crown Paint and SAMS Upcycling- they both agreed to provide resources for the project free of charge such as paint, card, ribbon and fabric.

Darwen Vale High School asked initially for one workshop for a group of 20 students. This proved a popular choice and became a full day of four workshops with each one having time to create artwork. All students were off timetable as part of the school enrichment day. The workshop provided to 82 students in total who all worked in small groups to create pieces of art.

St Christopher’s Church of England High School Sixth Form had a workshop for their seven year 13 (upper sixth) performing arts students. They used this project to fulfil their exam brief to produce dance, drama and musical theatre to reflect thoughts about the Salvador Dali painting Persistence of Memory – the famous painting includes images of death and melting clocks. The students produced some really emotive and powerful performances. It was attended by 52 people who all completed pre and post event cards. Before the events, results saw an average of 47% had conversations about illness, death and dying. Afterwards 100% stated they would now.

University Centre Blackburn second year Fine Art Degree students took part in the workshop. Their lecturer stated that the project fitted their exam brief perfectly and they used the project to complete two modules of their degree. The first was to create a piece using a theme of ‘working in the community around us’.

The second was to organise and exhibit their pieces in an exhibition. Students were challenged to consider their own attitudes to illness, dying and bereavement. Initially, the students had mixed feelings with working with this subject, some felt more at ease than others. The students also had a tour around the hospice. They named their exhibition “Dying to Live”.

All these events were widely covered on social media and by regional media including BBC Radio Lancashire. Organisers at the hospice said it was often a challenge to stimulate conversations about death and dying in a natural manner that was accepted by people’s loved ones and that this project had achieved results to reflect just that.