The Good Grief Trust: the power of community 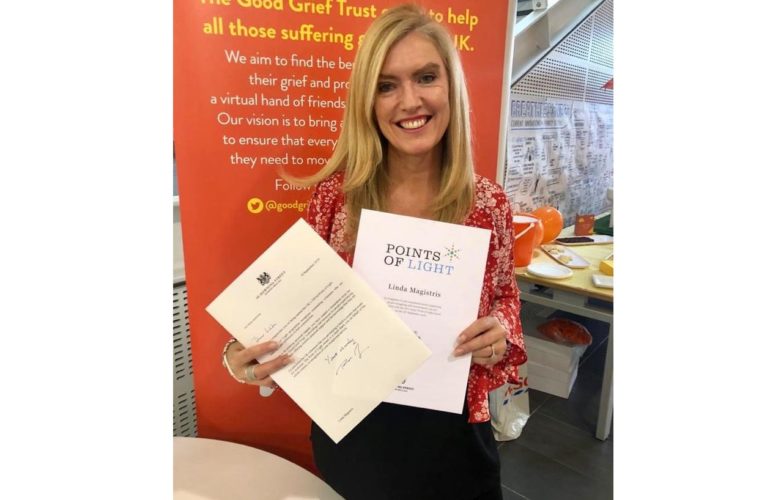 When her partner Graham died of cancer in 2014, Linda Magistris found herself struggling. There were no bereavement services at either of the hospitals Graham had been treated at, and she found no support was available for someone under the age of 50 who was dealing with grief.

“I never got choice” she says. “I was offered one charity which wasn’t right for me, and what I couldn’t understand was that when I went back to the GP and the hospital where Graham was treated there wasn’t any choice except that charity or antidepressants.”

By accident she came across WAY Widowed & Young, the only organisation in the UK that supports men and women under 50 whose partner has died. It provided the exact support she needed, yet despite being a large charity none of the healthcare professionals she’d spoken to had been aware of it.

This planted the idea of founding The Good Grief Trust. “I thought, these charities need to get to the people who need them quickly. Initially I thought we could make sure leaflets for all the different charities were in the bereavement packs produced by hospitals, but that of course wasn’t practical. So it had to be an online resource, and that was the thought behind the website.”

Since it began in 2016 the trust has built up a network of local, regional and national services, with almost 600 organisations on their database. The website lists services for very specific categories, with information for people who have lost their partner, sibling, parent, child and friend, as well as the newly bereaved, young people and over 50s. Tailored support is crucial, Linda explains. “Historically there was a thought that counselling can’t be offered until at least six weeks after the death, whereas now we know that on day one counselling might not be right, but contact is, and it’s really key we offer a choice of support on day one.”

“For some people it might be a phone line which is all they need in those initial days, for some it’s face to face contact, going to have a coffee with someone in the local coffee shop or local church group, or it might be professional counselling.”

The consequences of not receiving individualised support can be tragic. “I was just given one option, and the problem is that if you feel that is the only option and you don’t know there are others it can be catastrophic to your life. Research from Manchester University has found that 28 per cent of 20 to 24-year-olds who take their own life have had a bereavement, and 50 per cent of homeless people have been bereaved. All these statistics are really important. We have to understand it can be very serious if we don’t offer the right support to a person who is really suffering. It can have a knock-on effect all the way through their life.”

Funding is a challenge, and Linda says that sadly what’s on offer will vary greatly depending on where in the country it is. Another problem is awareness among the medical profession. “There’s a report out from the Royal College of Physicians about the fact that doctors don’t really understand that we need to speak to people not only at the end of life but through bereavement. Training needs to be in place for young doctors so they understand that it is a really important issue, it’s not just about keeping people alive and once the person’s died saying to the relative, “I’m very sorry for your loss” and that’s it. The health, social and financial implications are massive and it has to be acknowledged.”

Linda is a member of Hospice UK’s People in Partnership forum, and the Good Grief Trust has also instigated the all-party parliamentary group (APPG) on Bereavement Support, working with the government to influence change. With both these initiatives she wants to bring more people together. “That’s why we launched, so we can share and benefit from our different insights and experience.”

“One of our hashtags is #StrongerTogether and it’s so true. I think we’re coming to realise that working together can only be for the good. All our initiatives, like our pop-up cafes, we want to be able to link up with Hospice UK, we want all the hospices across the country to know they can get an umbrella and use the cafes to bring the community together to share their stories.”

“We want to be able to offer our Good Grief card to everybody, so if anyone is struggling, and if any health professionals are struggling to find support for their patients, their relatives or friends they’ll know where they can find it.”

Awareness among the general public is clearly growing. The trust’s Facebook page has a reach of a million people, which shows there is a real need and an appetite for sharing their stories. “People are engaging, they’re commenting, leaving messages, helping each other. Community as we know is really powerful. If you find someone else has been through the same sort of experience as you have it can be life-changing. It’s incredibly helpful to find hope for the future.”