“The hospice cared for my husband’s emotional and physical needs” 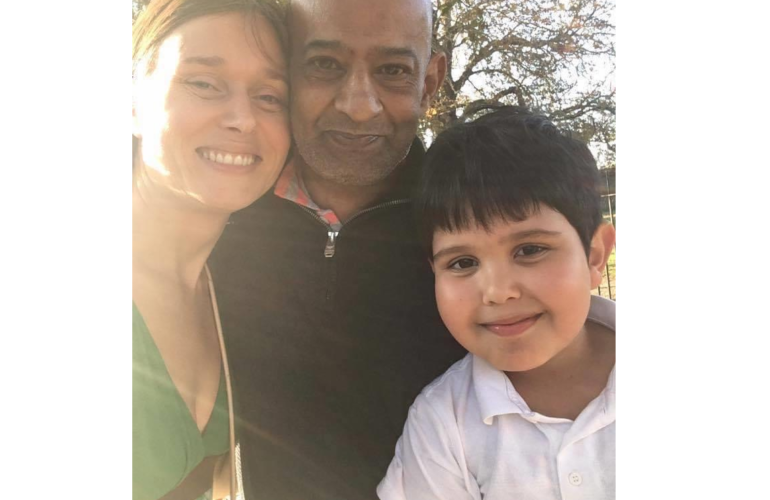 Sunil Modi-Nichols was referred to North London Hospice in 2019 after living with heart disease for a number of years. He had spent five years trialling both new and existing treatments, something that gave him precious time to spend with family and friends. His widow Claire tells us their story.

Sunil, 53, a communications manager, met theatre manager Claire through mutual friends and they were together for 25 years. They married in Goa and lived in Barnet, north London, with their 11-year-old son Tyler.

“Sunil was very fearful when he was referred to the hospice, but we were struggling and had run out of options so the hospital advised him it was time for palliative symptom based support.

“From the moment we arrived we felt very safe.  For me, I had a lot of responsibility as Sunil’s main carer and that responsibility was immediately shared as soon as we walked into the beautiful building in Finchley.

Sharing the responsibility of care

“Heart failure is an unpredictable illness. There are peaks and troughs” Claire says.  “I was Sunil’s main carer, had a full-time job and our son to look after. On several occasions the hospice suggested Sunil went in for two weeks of respite care.

During the years he lived with heart failure, Sunil was aware of the lack of knowledge in the wider community, and the gaps in care when it came to heart failure. He collaborated with the British Heart Failure Society and spent four years capturing his experiences for them, which will feature in a campaign documentary called ‘Fighting Failure’ to be screened this year.

“His first visit was a revelation to us. The staff cared not just for his physical needs but provided emotional support too. He had a room with a balcony where he could sit outside and there were big sofas for Tyler to lounge on if he wanted to. His time on the ward also gave me a chance to sleep and recharge. The doctors and nurses encourage independence and during each stay they helped and supported him to get back to living at home.”

During the pandemic North London Hospice kept its ward open, and consultations were often done by phone or video link. Access to the ward was limited and restrictions for visitors were introduced.

“Throughout the lockdown we felt supported. Anne, from the social work team called regularly, sometimes just to see how I was, and the spiritual care team have been wonderful. Laurence from the team arranged video meets with Sunil which he really appreciated and he calls me too.

“Sunil wanted to be at home but he was not at ease, so he went back into the hospice on 20th August. When he arrived he suddenly relaxed and stopped fighting. The next day he passed away peacefully. I was there holding his hand along with his sister and his best friend. I was so grateful I was by his side. We couldn’t have asked for anything more.

“Each member of staff is so caring and they have time for their patients. In a hospital the nurses are so busy, but at the hospice they stop and spend time with you. We all really valued that.

“North London Hospice cares for the emotional as well as the physical needs of a patient, something that was so important to my husband” Claire adds.