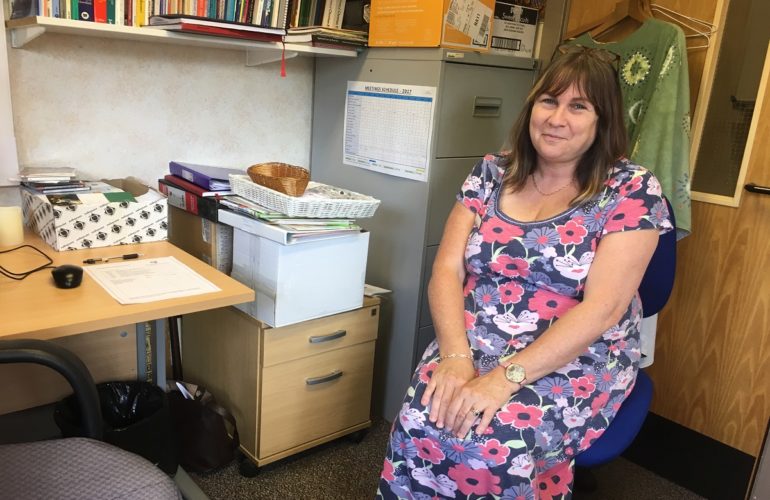 I have had a long career in education but my husband and myself had always said let’s try and take early retirement so that we can do what we really want to do. I wanted to work as a doula with women during pregnancy, through the birth and in the post-partum period.  So one of the first things I did after retiring was my doula training.

The direct translation of the word “doula” is “a woman that serves.” The idea behind traditional birth doulaing is to enable a woman to have a birth that is something she looks back on with a positive memory.  A doula tries to empower the woman to do that by supporting her choices and acting as an advocate in any way they can.

I became self employed as a birth doula, but I also then started to get very interested in end of life doulaing, which was something that initially I had not really been aware of.

The purpose of an end of life doula is to simply be there for the person who is dying and their family, so that they can choose the death they want. I can facilitate that process for them by being there, by listening to their thoughts, their concerns, by taking on board what their wishes are and helping to facilitate them.

I signed up to end of life doula training and I have now also done a couple of courses focused on end of life chaplaincy, but from a non-religious viewpoint.

In one of the courses I needed to complete a placement and I wanted to do this at Bolton Hospice.  My mum died in a hospice in Leicester, and it was such a lovely place, I was so impressed by it. So I asked my course leader if Bolton Hospice might be approached and John Hall, the Spiritual Care and Bereavement Lead at the hospice, was happy to accommodate me as a humanist chaplaincy volunteer.

I am quite new to humanism, and when I started to research it I could not believe I had not done it before because so many things fell into place that I truly believed in. There is a strong commitment to living the best life you can, which is in keeping with Bolton Hospice’s purpose “to enable people to live well until they die.”

I started volunteering at Bolton Hospice around two months ago but quickly realised I would like to stay on. The highlight of volunteering here is to be in this environment where everyone is so positive. The hospice gives patients and their families’ time, which is so precious. Just to have the time to sit and be with someone is so powerful. Being part of that positive team is great, it is a really good feeling.

My typical day involves coming in and having a chat with John who will get me up to speed on any new patients and then what I usually do is go down to the inpatient unit to visit any patients who would like to have a chat with me.

A lot of people assume by the word chaplain that you are religious, and that has given me a lot of thought. There was one lovely lady I went to see and when I said I volunteer with the chaplaincy team she rolled her eyes and said “I don’t believe in any of that!” When I explained I was a non-religious member of the team she was happy to chat to me.

I still think there is a long way to go in people thinking that a chaplaincy team might include people that are not of a religious faith. Seeing care and support in a broader pastoral and spiritual way is really helpful, especially with the growing number of people in the UK who identify as non-religious.

I can remember my mum, who was very religious, had her own vicar and the hospice chaplain who came in at the end to comfort her and I remember thinking, but what if you have not got that faith?

If I had been more aware of the things I know now when my own mother was dying, I would have done so many things differently. I would have played her favourite music when she was very ill, I would have sung with her because she loved hymns. I would have surrounded her with the things that she really held dear. I want to take some of that awareness into the work that I do, to make the end of life process as personalised as possible.