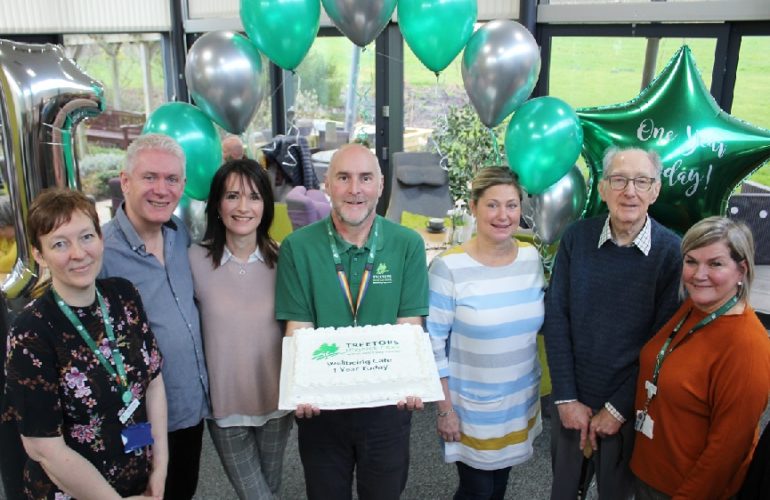 The Wellbeing Café at Treetops Hospice Care in Derbyshire is celebrating its first anniversary this month. Since opening in January last year the café has received over 1,500 visitors, including adults with a life-limiting condition, those who’ve been bereaved, their families and friends.

The Café, which runs every Thursday, is one of several new Wellbeing Services aimed at encouraging people to maintain their quality of life and capacity to care for themselves.

Mollie’s MND Support Group will offer peer and professional support for anyone affected by MND – patients, families and carers. The group has been named ‘Mollie’s’ in memory of former patient Mollie Southway. Mollie and her husband John first visited the Café shortly after her diagnosis.

John explained: “Mollie’s condition first manifested when she struggled with simple mobility tasks such as walking up the stairs. Mollie felt something serious could be wrong and her GP at first was puzzled, but after explaining her concerns, an appointment with a neurologist was suggested. The result was of course, the devastating diagnosis of motor neurone disease.”

Mollie’s four daughters,  Teresa Rawlings, 55, Fran Wright, 59 Linda Bendall, 60, Lesley Saxton, 64, and her close friends are all deeply touched that the new group is being named after her.

Mollie’s daughters said: “Mum was fully aware of her condition from day one. Brave and accepting with grace and humility, she retained her sense of humour right until the end, always up for a giggle with a cheeky glint in her eye. She was a lively, independent, loving person and a shining example to us all.

“She certainly did not deserve to struggle herself with this devastating condition over her last two years with us. She continued to teach all of us even when her own health was failing – I think we only then really understood the importance of family, but even the four of us could not offer all the support mum needed.

“MND is such a terribly cruel disease, with new physical challenges occurring practically daily. We often felt inadequate and unprepared as the disease took a stronger hold.

“Mum and our family were initially supported by the wonderful MND team at Queen’s Medical Centre hospital, who introduced us to Treetops. Mum and dad always received a very warm welcome from the staff at the Wellbeing Café. It provided a much needed break for dad and a welcome change of scene for mum.

“Creating a support group will provide comfort and reassurance to other MND patients and we’re especially touched that the group is named after our dear mum.

“She would’ve been extremely flattered to have such a worthwhile service named after her and it’s a wonderful tribute that will allow us as a family to honour her memory forever. Thank you to Treetops for providing this opportunity to create hope amongst loss.”

Ali Jordan, Treetops senior staff nurse, added: “We’re thrilled to celebrate this Wellbeing Café birthday and welcome so many people in such a short space of time since we opened.

“The Café is a huge success with over thirty people coming along every week. It’s an easy and informal way for people to come to the hospice, often for the first time, and find out more about the support and services available to them.

“The new MND Support Group, in collaboration with the Motor Neurone Disease Association (MNDA), will provide a safe place to come for support and information from Treetops, MNDA and local health professionals.

“It’s a local support group for people of Derbyshire and Nottinghamshire to come and meet people and their families in a similar situation, a place to share tea and cake, and to find out how we can help you.”