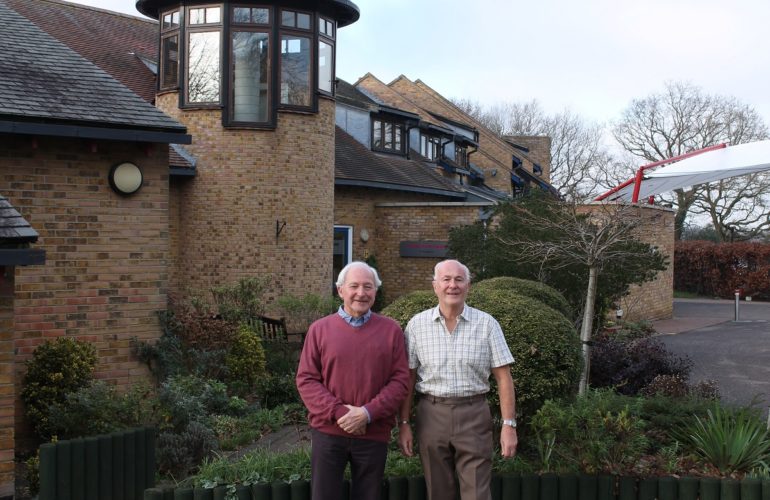 This summer marks 35 years since Havens Hospices opened Fair Havens, and 20 years since they opened Little Havens Hospice.  Over the past 35 years they have supported over 25,000 adults, babies, children and young people in Essex.  As part of the celebrations trustees Reg Ramm and Clive Pegler reflect on their time with the charity.

Reg was at the initial meeting with the three founders that led to Fair Havens Hospice opening its doors on June 13 1983. He recalls:

“When Daphne explained what they wanted to do my ‘accountant hat’ went on and I honestly had strong reservations. I said to them – “you have no building, you have no money, you have no staff or equipment; so you have no hope.” I was prepared to walk away at that point and Daphne took me to one side and said “oh ye of little faith” and asked me to come to the next meeting. I did and I am so glad I did, because the general feeling from the public made me realise that this was something I wanted to be a part of.”

Having seen the response from the public, Reg has since volunteered as a trustee and honorary treasurer, and has been involved with the setting up and running of the charity’s trading arm.  One of the things that has always struck Reg as amazing is how generous the public have been with their time, support and fundraising over the years.

“There are two stand out moments for me. The first is how our local community have always supported us, especially when we have had a bigger need for funding like when we decided to build Little Havens Hospice, or when we had a crisis one year where we were in real financial difficulty. The general public just rallied round in the most amazing way – more so than I thought they ever would; that will always stand out for me.”

“The other moment that comes to mind is when we had the first shop in Hockley and were negotiating with the buyers and the landlord changed their minds – we had three days to get out of the unit. So we camped out in some porta cabins with all our stock; the local business community came together and offered us a warehouse, goods, services and everything else so we were only closed for three days. To me that was absolutely amazing, that people would do that for us. “

Clive has been a supporter of the charity since the beginning and became a board member in 2006. He says:

“I knew Daphne through my wife and had always respected her opinions; so when she came forward with the concept of a hospice – it was her vision that really made me feel that this is something we must support – I started actively supporting Fair Havens at my church in 1983.  In 2006, having retired from work the previous year, I joined the board.”

“It is a wonderful thing to be a part of – Havens Hospices are there for those people who are desperate and help them go through part of their living that is traumatic. It does not really matter what age, whether it is a child or a middle aged or an elderly person, Havens focus on that person’s  quality of life right up to the moment their life ceases at the hospices. Little Havens, Fair Havens and The J’s provide that service with a welcome and a smile. I am very proud to be a trustee of a charity that is so focused on life and love; it is a privilege to be a part of it.”

“One of the things we have always been concerned about is something called ‘transition’ – what would happen when children were no longer able to use Little Havens because of their age? We did not know what to do to fix that issue and by joining with The J’s we now have a model that we can use across Essex that allows us to meet the needs of all who need us.”

The charity is now looking to the future for Fair Havens with plans to start building a new adult’s hospice in September this year.  The new Fair Havens Hospice will bring together a range of specialist services to support people in making choices about their care from the day they receive their diagnosis, as they journey with their condition and as the end of their life approaches.

Having supported the charity for 35 years, Clive and Reg are both looking forward to seeing the hospice become a reality. Clive says:

“I live quite close to the new site and every time I go past it I think “yes, a few more years and this is going to be established, and an even greater number of people are going to be able to benefit, which is wonderful.”

Currently every month Fair Havens turns away 11 people because there is no bed available for them when they need it; with the support and generosity of the local community the new Fair Havens will be able to provide free specialist care for twice as many patients and their families.

“It really is going to be marvellous. Looking back to when we first opened Fair Havens we had four beds; so it is amazing to think today we are planning for 16 beds to serve the community in a much different way.  And it will not only be more beds, but more services and more activities, and we will be able to treat more people. It is something that is an answer to prayer for everyone, not just myself.”