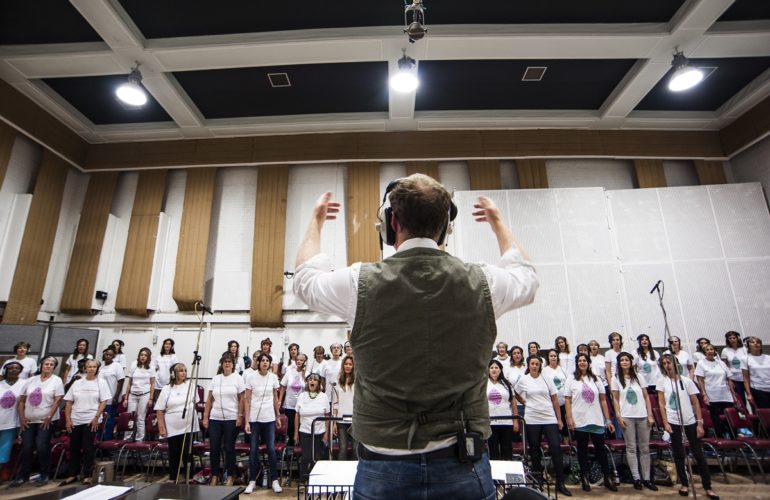 Stand Together is a response to the recent devastating events that have taken place across Britain performed by Choirs with Purpose, a group of  ten choirs including Britain’s Got Talent 2017 finalists the Missing People Choir made up of friends and families who have had someone they love go missing,  the Lewisham and Greenwich NHS Choir with staff from the NHS workforce who reached number 1 at Christmas 2015, and the UK Hospices Choir, with members  of 45 hospices including  patients, relatives, staff and volunteers.

Along with seven other choirs they will record popular cover songs relevant to the cause and are set to release a single.

The charities have launched a crowd-funding campaign where as well as pre-ordering the album up to 300 members of the public can pledge £50 to record their vocals on the final track forming a ready-made “pop-up” choir.

James Hawkins, the producer of Stand Together, said:

“Despite the negative news that we seem to wake up to every morning, groups of people continue to come together every night of the week in living rooms, church halls, community centres, churches and school gymnasiums across the land to forge powerful communities of solidarity through music.”

“Our aim is to encapsulate the spirit of these choirs and produce some cracking songs while we are at it. We hope that everyone will get behind the campaign and join our pop-up choir and pre-order the album via Pledge Music.”

The UK Hospices Choir has chosen to sing the Celine Dion ballad ‘My Heart Will Go On’. Antonia Bunin, Hospice UK’s Director of Hospice Support and Development, said:

“It is exciting and a little daunting to be performing ‘My Heart Will Go On’ but we are committed to putting in the rehearsal time and having fun in the process. I know the lyrics will resonate with everyone, including the patients and families that hospices work with.”