CareCommunity Engagement Why I volunteer: “To find my calling” - ehospice

Why I volunteer: “To find my calling” 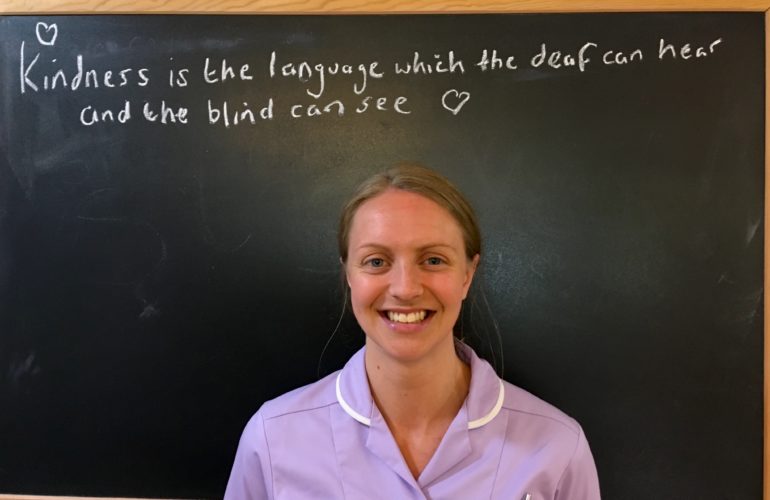 August 20, 2018 | No Comments
Categories: Care and Community Engagement.
Tags: carers, nursing, volunteering, and why i volunteer.

When 26-year-old Stephanie Holman graduated from university, she did not have a clear idea what career path she wanted to follow, but rather a vague notion that she wanted to work in a caring role. After a couple of false starts in jobs she did not feel suited to, she decided to explore the possibility of becoming a nurse and began volunteering as a healthcare assistant at The Hospice of St Francis in Berkhamsted  to gain some hands-on experience. This opened doors and nurtured her desire to care, and she has now enrolled on a Masters in Adult Nursing.  Here she explains how the hospice helped her find her calling.

Throughout sixth form and while I was at university I worked as a personal carer. At that point I had no idea what I wanted to do but my mum is a nurse and I had an idea that, like her, I wanted to work in a caring role.

So while my friends all worked in retail jobs to earn some extra money, I got a job as a personal healthcare assistant to a lady who lived in her own home with multiple health needs. I would help her around her house, prepare meals and do a bit of cleaning. It was a role I really enjoyed.

I was at the University of East Anglia at the time studying modern languages with the aim of doing something in a related field. The main thing people go into with languages is teaching, so when I graduated, after a couple of months working in the corporate world as an account manager, I got a job as a teaching assistant working with children with special needs and those who had English as a second language. What appeals to me about people-centred jobs like this is that you can actually see the difference you are making to people’s lives.

Ultimately, I knew I did not want to go into teaching so I applied for my current job, working in student services in the nursing campus at Buckinghamshire New University.

I have been there for three years now and while I enjoy it, I do not want to be in an office job for the rest of my life. At the back of my mind I have wanted to do nursing for quite some time but I thought I needed to get some experience before I took the plunge as it is such a huge change of direction and I wanted to be sure.

I have had family members who have had cancer and the idea of working in a hospice really appealed to me. I thought if I volunteered at a hospice it would help me to decide whether nursing is for me after all, so I went online and found The Hospice of St Francis. I explained what I wanted to get out of the experience and Gillian, the Voluntary Services Coordinator, suggested I volunteer as a Healthcare Assistant on the Inpatient Unit.

I started off shadowing senior nurses who showed me the ropes and I joined in with the other HCAs washing and bathing the patients. At first I felt like a spare part but I soon got to grips with it. I was working with different people each week and there was a lot to learn but everyone was so friendly, supportive and welcoming that I soon found my feet.

My original aim was to see whether nursing was a right fit for me and I quickly realised I felt very comfortable working at the hospice and that it was something I could see myself doing long-term.

I have been volunteering at the hospice for a few months now and I can clearly see the difference that the nurses and HCAs make, not only to patients, but also to their families. People seem so grateful for the care they receive, which you can see from the amazing comments they write in the visitors’ book. These are people who have often been through something as unimaginably difficult as losing a loved one, yet they can still see the difference the nurses make. I find that incredibly inspiring.

I can now see myself working in palliative care and oncology and hope that by going down that route I find a fulfilling and rewarding career. What I find most rewarding about working at the hospice is that you are able to properly nurse and care for patients because you have the time to do so, unlike in a hospital where time is often pressured. It is this more than anything that has helped nurture my desire to care and opened doors for me in terms of clarifying my next steps.

I have the most amazing friend who I lived with while I was at university, who was diagnosed with ovarian cancer in 2015. She told me that she cannot begin to explain how important her nurses and HCA’s have been to her palliative care. Not just in terms of helping to fix her pains, but really seeing her pain and being there for her throughout everything. I do not know anyone as inspirational as her and she has been there to encourage me to achieve what I want to achieve.

When you graduate you are expected to know what you want to do for the rest of your life. Volunteering at the hospice has helped me realise that it is not too late to do an about turn and do something completely different, and it does not matter if you do not get there straight away. I hope to carry on volunteering at the hospice after my nursing course starts in September as I have got so much out of it.