Care Working together for a ‘good death’ - ehospice

Working together for a ‘good death’ 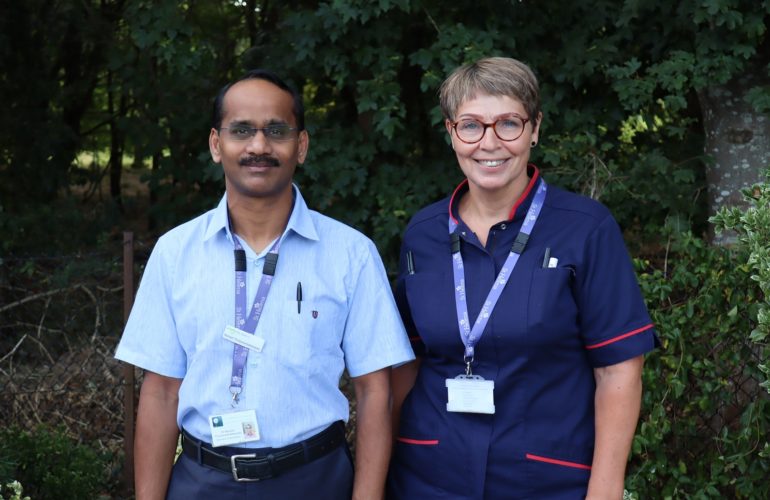 When a call from paramedics attending to a man at his home came in to the SinglePoint 24/7 advice and information phone line at St Helena Hospice in Colchester, it triggered a rapid response by clinical nurse specialist Wendy Rogers. The man was unknown to the hospice team and the only brief notes available raised concerns about his prognosis and stage of his illness.

Wendy decided to seek support from her medical colleague, Dr Ramesh Thulavavenkateswaran, as it was unclear if it should be a CNS or doctor visit.

Wendy explained: “There were some medical complexities and my remit is very much end of life. I wanted to be sure this man was at the end of life because there were a lot of things pointing to the possibility this may be reversible. We hadn’t met this patient at this point.”

The pair arrived at the home of the patient within half an hour to find he was living in a complex home situation with his elderly father, who was also his carer.

Working together, they established that he did in fact have a poor prognosis and was end of life, with no advance care planning or end of life tools in place. It was evident the home environment was not suitable and that he needed to be somewhere safe.

Ramesh remembered: “We immediately knew a joint visit was the right thing. With the history and the situation, clearly he was dying and had days to live. Recognising he was dying changed everything.”

Plans quickly changed as the patient repeatedly began to say he was very thirsty. Ramesh explains why this mattered:

“Fluids and end of life was a big topic in terms of assessment and prognosis. As part of the dying process generally, people say ‘I’m not thirsty’ or they don’t bother as it’s only dry mouth and don’t worry about fluids, but this patient specifically asked. But he was flat and couldn’t drink fluids in that position.

“Then the plan got more complicated. Unfortunately, we can’t give fluids in the community because there is no facility to monitor. So if anyone needs fluids in the home, they have to go to hospital or somewhere else. We couldn’t leave him at home because he was dying and he needed fluids, so we needed to send him somewhere.”

Wendy was relieved to have Ramesh there to back up her instincts that the patient was indeed dying and that his thirst needed to be addressed. She said:

“Often when someone is end of life you look at other ways of keeping their mouth moist because drinking is difficult; they can choke or aspirate, and often people stop drinking by their own choice, they don’t want to drink, they’re dying, their bodies are telling them that they don’t want the fluid and they listen to their bodies.

“But this man wanted to drink, he was thirsty and he was vocalising that. Ramesh felt it was important that we get fluid into him; it wasn’t going to save his life, he recognised he was dying but he needed to feel comfortable – and he wasn’t comfortable in the situation he was in.

“Ramesh decided to get him in and give him IV for a short period to make him comfortable so he could have a really good, comfortable death.”

Wendy explained to the patient how the palliative care wards in the local hospitals were similar to the hospice, and he consented to go. However, the nearest hospital was expecting a patient to arrive for their last available bed and the patient didn’t want to be too far away.

Using her skills, knowledge and her established relationship with the palliative ward nurses at both the nearest and next nearest hospitals, Wendy worked with them to divert the expected patient and secure the nearby bed. She remembered:

“He was only in there a short time, eight days before he died, but I saw him there and he was comfortable, like a different person. The outcome was the same, he died, and possibly would have died in a similar time limit but the collaboration, the working together, and bouncing ideas off each other really worked.”

Ramesh agreed: “I feel like everyone didn’t do it as just a job – the hospital could have said sorry, no beds, but everyone pushed a little bit to see how they could help when they saw the patient was struggling. Everybody was working towards the patient and I feel very happy about that.

“It’s really satisfying. Everyone working at St Helena will have some reason, humanity, otherwise they wouldn’t work here. Putting patients as priority and then trying to help and trying all the means to help them.

“At St Helena we are not task-orientated but people orientated. The situation here was complicated and that’s why joining hands made a big difference.

“I value team work very much. Collaborative joint working should be encouraged every time.”

Wendy agreed: “I remember feeling really vulnerable before I went in because of how much was going on with this patient. Ramesh looked at all of those things and confirmed he was end of life. I didn’t want to treat him as end of life if there was something that could be reversed.

“When the patient got to the ward, he really picked up for a while. He was drinking and he actually ate some jelly. It was very short-lived but he was completely happy, so it was brilliant. I can see why Ramesh is proud and I’m proud too. It was a lovely visit and a really good outcome.”