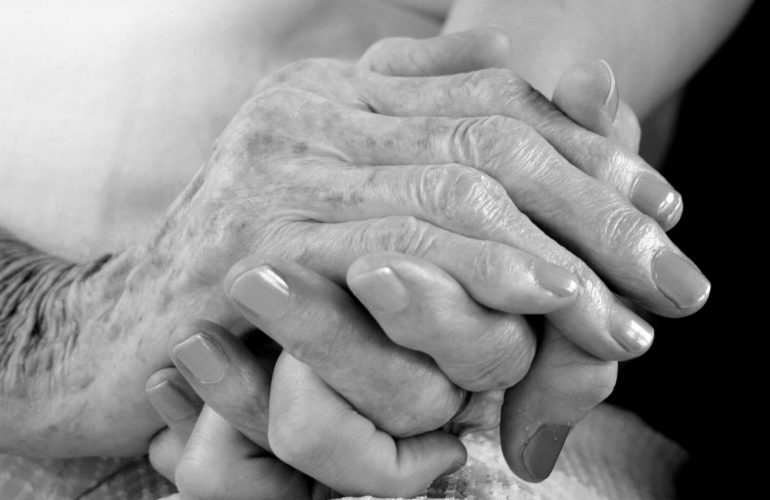 This story has a happy ending, and retelling it still feels like therapy. Four years ago, I was thrust into the role of caregiver for my husband who became suddenly, critically ill. I learned hard lessons about advocating and caregiving. Just a month short of retirement, and claiming he had no warning signs, Stan was struck with a serious bout of sepsis. He nearly died. Afterward, he said he thought his aches and pains were “pending retirement.” Since I’m a nurse, I felt somehow I’d failed him. I should have seen or suspected something. The next four months of my life as a caregiver began early in the morning of April 1, 2010, with a call to 911. When I called our kids later that day to say their dad was in ICU, our son asked, “April Fools, right, Mom?”

Conscious Caregiver
As a nurse, I always thought I knew the ropes—navigating the maze of medical care with a loved one would be easier for me because of my experience. I seriously think it may have made the experience more difficult. Early on, a friend and fellow nurse suggested I keep a journal, recording not only my feelings but also information, names, lab results, appointments, who called, who said what, etc. It was good advice; it helped me to not feel completely out of control. (I still flip through it occasionally, reprocessing the experience.) But I think keeping a journal made the medical community nervous. There I sat, notebook in hand, pen poised as the latest specialist recounted the newest findings. It came in handy, and in several cases, was helpful, in Stan’s recovery (and my own mental stability). I also recorded my thoughts or things Stan said or did.

Recovery
We were lucky. After three different hospitals, a second ambulance ride, scans, massive antibiotics, and finally, major surgery, I took Stan home to recover with another two months of IVs and therapy. He had experienced good care. His recovery complete, he dove into his “new life,” suffering no ill effects. Today, he’s healthy and, like me, very, very grateful.

He remembers little of those intense four months. Only a month into it, he did attend his retirement party. Fiercely proud and not wanting to go unless he could “stand tall and be coherent,” (but still in significant pain) his doctor commented, “You want both?” We stood together that day, addressing his guests with a short talk titled, “Top10 Things We Would Have Rather Not Learned This Month.” He let me help him prepare these short remarks, which was very much unlike him. It was not how he had planned his retirement send off. We took turns presenting; it felt surreal. It took another two months before Stan was fully himself again. Like all caregivers, I believe I came away with some hard lessons learned.

Caregiver Bill of Rights
After a particularly bad day, I left Stan’s hospital room in tears; actually, I was hysterical. I knew I was exhausted and worried, but I was also frustrated and sad, and writing helped express my concerns. I pounded out my own “Caregiver Bill of Rights,” taking into account some of the experiences I had as the “responsible caregiver.” Stan was my husband; I was his advocate. It never felt easy and rereading what I’d written later, it was pretty clear. This kind of caregiving was complicated.

I suspect if every caregiver on the planet wrote their own bill of rights for caregivers, there would be as many different versions as there are people. Since each caregiving situation is different and every person is up against a unique set of problems, there are a million ways to approach the topic of the self-care and preservation of those who provide care to loved ones.

Google “Bill of Rights for Caregivers,” and you’ll find many affirming approaches to this proposition. Jo Horne presents a helpful list of reasons to believe caring for ones’ self is “not an act of selfishness.” She reminds us that to survive, we need to first take care of ourselves. Not knowing her story, nor who she might have cared for, I read between the lines. She understands, I suspect from experience, that to stay a strong and effective caregiver, one needs to take good care of oneself.

I think many of these well-worded and carefully constructed “documents,” meant to help instruct and support others in the art of caregiving, are born of personal trials; hard-won, hands-on, days, weeks, months, years of attending to those who need us. It’s never an easy road.

Sherri Snelling, CEO of Caregiving Club and author of “A Cast of Caregivers” has another version, one that speaks not only to self-care and preservation but also beyond, to what to we should be able to expect from the health care team, employers, our family and friends, as well as public, private and even national resources.

You’re Not Alone
I never dreamt I’d be in a situation that would prompt me to craft my own Caregiver Bill of Rights. I suppose it’s like writing a letter in a fit of passion; sometimes it’s better to wait before you send it out or maybe never send it at all, tear it up or bury it in some drawer. But in my case, my own Caregiver Bill of Rights was written just as I came to the end of my rope. Tears streaming down my face, I was forced to admit, even though I was a nurse, or maybe because I was, I felt powerless and exhausted. Once I pounded out my thoughts, took a breath and thought about it, it felt good. I felt better. I suspect I’m not alone.

What follows is what I wished for as a caregiver; my own Caregiver Bill of Rights. Rereading it, I think what I wanted most was to be heard and acknowledged. I’ve left my version mostly unedited, as a reminder of that difficult time. Caregivers are fragile. A smile, a kind word goes a long way in helping ease what is often a long and difficult road. Three cheers for caregivers everywhere!

This article originally appeared on Moments of Life website. Visit MomentsofLife.org website to read the Caregivers Bill of Rights: Regarding Clinic Visits, Home Care and Hospitalization of Loved Ones, by Sharon Dardis.

Sharon Dardis, RN, BSN, is a former Hospice of the Red River Valley employee. Beginning as a volunteer, she later became a hospice staff nurse and bereavement specialist. Sharon developed and facilitated “Kids Grieve, Too,” for Hospice, a support and educational program for young people experiencing the death of a loved one. Moving to the Twin Cities in 1993, she helped develop and coordinate “Kids In Grief” another children’s grief support group in Stillwater, Minn. Now retired, Sharon is a board member of the Minnesota Coalition for Death Education and Support and also edits their quarterly newsletter, “Coalition News.” In 2000, Sharon coauthored and published, “As I Journey On: Meditations for Those Facing Death.” The proud mother of three and grandmother of eight, Sharon spends her time with husband, Stan, in St. Paul, Minn., and Alpine, Wyo.