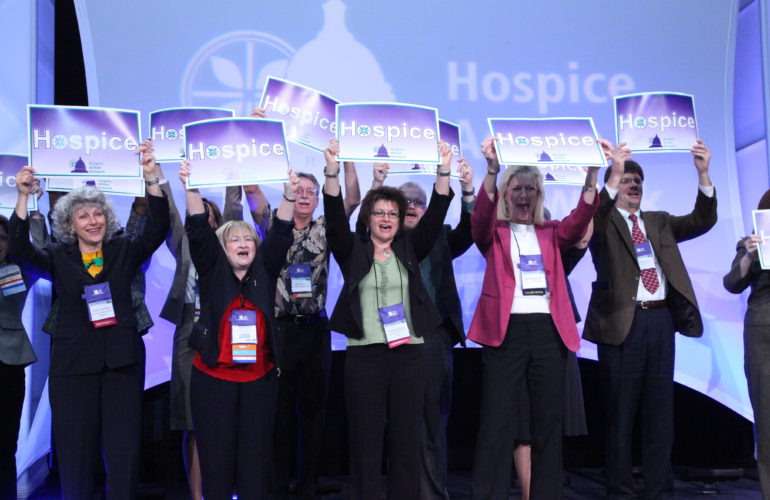 In thinking about health policy and what might lie ahead for the hospice community in 2015, it’s helpful to take a brief look at some of the successes we had as a provider community in 2014. First and foremost, we helped provide comfort, peace, and an easier end-of-life transition for millions of Americans facing the end of life. The Hospice Action Network and National Hospice and Palliative Care Organization are thankful for all hospice and palliative care professionals who dedicate themselves to the ideals and philosophy of hospice and the IDG.

A Quick Review of 2014
In terms of policy, 2014 was a year filled with challenges as well as outstanding successes. First, we were able to protect patient choice for Medicare Advantage enrollees. With your help, HAN pushed back against the idea that hospice should be carved in to Medicare Advantage. However, this could be an issue again in 2015, and we’ll be watching it closely.

The issue we heard the most about from the hospice community was undoubtedly hospice and Medicare Part D. CMS issued several troubling pieces of sub-regulatory guidance regarding hospice and Part D in 2014, which resulted in hospice patient confusion and distress, and outsized regulatory burdens on hospice providers. The hospice community engaged in a multi-pronged campaign to pressure CMS to change their guidance; CMS ultimately changed their guidance to be more streamlined. This was a huge win for the hospice patients and families we serve.

A third issue was the passage of the IMPACT Act into federal law. As most providers are aware, the IMPACT Act mandates surveys for hospice programs every three years (see this NewsLine’s cover article), enabled medical review for hospice programs with longer lengths of stay, and aligned how the Hospice Cap is calculated with hospice reimbursement. These provisions will certainly strengthen the hospice community and support compliance efforts.  (Learn more about the IMPACT Act on the HAN website.)

What to Expect in 2015
Well, as always, the crystal ball here in Washington is a little foggy, but we do see a few issues on the horizon that hospice providers should be aware of.

First, let’s touch on the November 2014 elections. Republicans won many key races and now have a majority in both the House and the Senate. In terms of day-to-day operations, the hospice community may not notice too much of a difference. We still have a divided government – republicans control the legislative branch and democrats control the executive branch – so don’t expect to see sweeping changes in 2015. Instead, look for some different policy areas to be highlighted.

With republicans controlling the agenda in the House and Senate, we may see some renewed interest in integrating hospice into Medicare Advantage plans. Rest assured that HAN will monitor this and inform the community as the situation requires.

Additionally, expect the initial months of 2015 to be a little hectic, new freshman members of Congress will be setting up their offices, and hiring staff, and returning members may be adjusting to serving on new congressional committees or more senior posts. After this is done, some politically motivated votes – sometimes called messaging votes – are likely to occur. The main purpose of such votes is to prove to constituents that their elected officials have gone “on record” as supporting or opposing legislation.  These are common when a chamber of Congress switches hands, regardless of the party assuming control.

SGR and the Debt Ceiling
Starting in March, however, things are likely to get interesting in a hurry. Congress has two huge deadlines looming that they have tied together. Both the debt ceiling and the Sustainable Growth Rate (SGR or the “doc fix”) will come due at the same time. Both of these issues have to be dealt with to avoid widespread economic panic.

The SGR is the formula for how doctors get paid for seeing Medicare enrollees. If Congress does not address the SGR, doctors will suddenly get paid around 20 percent less for seeing Medicare beneficiaries, which would have dire effects on the economy and seniors. Note that the “doc fix” doesn’t apply to hospice physicians.  However, depending on outcomes, the hospice community could be affected in several ways.

Any policy initiatives that require more spending must be offset by equal amounts of cuts elsewhere. So if Congress wants to avoid paying physicians 20 percent less, they’d have to find the money to pay for that by cutting an equal amount of spending elsewhere, called “offsets”— part of which could come from hospice. The hospice community (among other Medicare providers) could in effect have our per diem rates reduced for fixing the SGR.

The debt ceiling is the legal amount of money the government can borrow to pay its bills.  There have been demands in Congress to drastically cut federal spending as a condition of raising the debt ceiling.  Hospice rates could be included as part of a larger Medicare reduction package to increase the amount the Treasury is allowed to borrow.

NHPCO and HAN will be watching these areas closely and will keep the hospice community informed about any potential threats. Because hospice care is mainly paid for by Medicare we have a focused concern about Medicare reimbursement rates. When you add to that the fact that hospices are already dealing with three cuts to reimbursement and increasing regulatory burdens you can see why these issues could be significant.

There’s More
NHPCO is monitoring another big policy area in 2015, this time coming out of CMS.

If you are familiar with the hospice and Medicare Part D situation from 2014, you’ll know that the debate centered on which drugs were related to the terminal condition. In several of their 2014 communications to the hospice community, CMS seemed to suggest that they may be looking to expand the definitions that have been used for the Medicare Hospice Benefit since it took effect in 1983.

It seems to be CMS’ contention that most of a hospice patient’s conditions are related to the terminal prognosis. NHPCO contends that the best people to determine what is related to a terminal prognosis are the hospice physicians who certify patients for hospice care, and who continually check in and monitor these patients as their terminal illness progresses. Expect this to be a hot issue in 2015, and to hear from NHPCO as we work with CMS to influence their direction in the coming months.

Additionally, CMS may pursue hospice payment reform in 2015. The Affordable Care Act (sometimes known as Obamacare) had a provision that enables the department of Health and Human Services to change the way hospices are paid. HHS has signaled that they may look at starting to change the hospice payment structure from its’ current per-diem format to something else. NHPCO will absolutely be at the table for these discussions, and we’ll keep you informed.

Finally, program integrity will be an ongoing issue in 2015. The IMPACT Act was an important step forward for our community, but we believe that there is ongoing congressional interest in ensuring that hospices are providing the best possible care to their patients as the benefit modernizes. Several investigative media articles that appeared over the past year have also added a sense of urgency to ensuring that every hospice is held to the absolute highest standards when it comes to providing end-of-life care. Expect this to be an area of activity in the 114th Congress.

Of course, the 2016 elections will loom large over most of the second half of the year, which will affect things as well.

So, what can you do? As always, HAN suggests working to build relationships with your members of Congress now! We have resources available on the HAN website to help you with this.

Also, think about sending clinical members of your hospice team to the annual Advocacy Intensive here in Washington on July 13 and 14, 2015. Your staff members will learn about best practices in advocacy and gain a deeper understanding of policy issues. HAN believes they are the best people to relay the hospice “story” to their federally elected lawmakers.

Of course, we ask you to also continue to serve as the collective voice of the patients and families in your community.

Tony Kudner is NHPCO’s manager of grassroots advocacy and spearheads advocacy efforts of the Hospice Action Network and the U.S. hospice community.