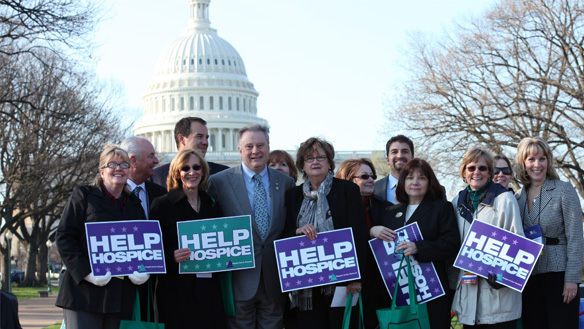 Through the NHPCO and Hospice Action Network’s annual Advocacy Intensive and the virtual ‘click2call’ campaign, Congress heard the hospice community’s message in record numbers. And not only did they hear the message, they listened and they acted! The sign-on letter campaign was a resounding success; here’s a breakdown of the co-signers:

“Quite simply, we don’t think there could have been a stronger showing for our community,” said J. Donald Schumacher, NHPCO president and CEO. “But that’s not all! NHPCO & HAN have been working on this issue through a number of other legislative channels on behalf of the hospice community.”

Additional results from advocacy efforts include:

And last week, even the Medicare Payment Advisory Commission (MedPAC) commented on the guidance, and suggested that the guidance be suspended until a uniform process can be implemented.

Through the efforts of Hospice Advocates across the nation, both Congress and CMS have heard what this misguided policy is doing to the patients and families being cared for by hospice providers.