Care Important lessons I learned from my father - ehospice

Important lessons I learned from my father 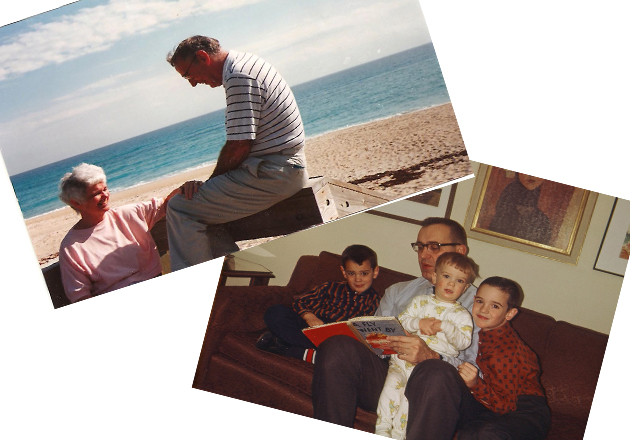 Two months after our family celebrated my dad’s 70th birthday he noticed a dull, nagging pain in his hip. He brushed it off as arthritis brought on by college football injuries. When the pain intensified, and he found himself sitting in his car for an extra 30 minutes after his drive home from the office because of his pain, my mom insisted he visit his physician.

It had started in his lung and had spread to his bones. At the time of diagnosis it was stage four. There is no stage five.

None of us could believe that it was so advanced at the time it was discovered. I knew my dad was tough but somewhere along the line you think we would have had a clearer indication that his discomfort was not wear and tear from his college football years but something life-threatening.

Lesson number one:  Life can throw you a health-crisis curveball.

No two people will have exactly the same experience when facing a serious illness.  Hearing a doctor say, “It doesn’t usually happen this way…” provides little comfort.

My dad was a physician and my mom a nurse. Even with this background they quickly learned that care for someone who is dying was complicated.

Dad followed a course of aggressive radiation and chemotherapy – led by other physicians who were his friends and colleagues. They assured all of us that they would fight with everything they could. And that they did. That might not have been the best choice.

There were hospital stays and trips to the ER.  And lots of trips to a nearby drive-thru where we would pick-up chocolate frosties.  Oddly enough, the only thing that seemed to have any taste to Dad was these non-dairy frozen desserts. For a man that enjoyed food and insisted on family meals in the dining room almost every night of his life, the fact that food brought no comfort was heartbreaking in a way.

I remember him struggling to come down to the dinner table to celebrate my own birthday a few months after his own. He wouldn’t let us move the party upstairs – this was a meal that had to be in the dining room. Watching him slumped over the dining room table, unable to hold up his own head was pretty much all I remember about that birthday. He roughly scribbled “Love, Dad” on a birthday card in handwriting that was so wobbly and weak I couldn’t believe it was his hand. That signature on my birthday card was a powerful sign to me that things weren’t good.

Despite all the encouraging rhetoric we heard from his physicians, that birthday card signature said it all.

Nine months later, dad was convinced that the treatments were causing as much if not more discomfort than the cancer. There’s no need to paint a picture other than to say he was miserable most of the time during treatment.

We asked about hospice and his loyal team of physicians said, “Not now…why would we do that now? We aren’t ready to give up!” The fact that his quality of life was so poor didn’t seem to factor into their recommendations.

The day before he was set to start another grueling round of chemotherapy, my mom knew he couldn’t go through that process again, she called our local hospice. Even with some of the best oncologists in town helping map out his plan of care, we ended up being “self-referred” to the professionals who could bring some comfort back to my dad and some moments of hope back to our lives.

The focus on symptom control, pain management, and emotional and spiritual support seemed ideal. There would also be support to help with tasks of daily living which was important – and needed. My dad was a big guy (although about 60 pounds lighter than he was at his 70th birthday) and my mom needed help bathing him and hospice offered some help.

And I will never underestimate the value of relieving someone’s physical pain. Throughout the preceding months of aggressive care, I now realize there was a shocking lack of palliative care that would have addressed his pain – as well as other important services.

Unfortunately, dad died three days after his hospice admission – clearly too little time to take full advantage of the many benefits hospice could have offered. Yet that’s not necessarily a rare occurrence. About a third of hospice patients die or are discharged within seven days of admission.

Lesson four:  Hospice is not giving up and it should not be thought of as brink of death care.

Yet, the care we did receive from hospice in those final days did bring a sense of calm and compassion to what had been a tough road – as well intended as it was by his doctors, who I know did care for him.

I still shudder a bit when I think he was supposed to start another round of chemotherapy only 72 hours before he died.

The question that seems to haunt so many other families that call hospice near the end of life was on the mind of mine, “Why didn’t we call hospice earlier?”  Hospice professionals will tell you this is one of the most frequently heard comments from families they serve.

Predicting the amount of time left for a patient with a life-limiting illness is difficult in the best of situations. No two people respond exactly the same way to medical treatments or the illness itself. Physicians cannot be expected to predict a patient’s life expectancy.

Hospice is not a place but a philosophy of care that provides professional medical services, pain management, and emotional and spiritual support in a caring manner that places the patient and family at the center of care. An interdisciplinary team of medical professionals and trained volunteers deliver care with the wishes of the patient and family always a priority.

Hospice care is exactly what we needed much sooner than we actually got it. I wish we had paid more attention to what options really were available along the course of dad’s illness.

Should physicians be stronger supporters of hospice? Should families learn to be their own health care advocates? I’d say yes to both of those questions. Improving care for the dying is a responsibility that we must share – medical professionals and members of the public alike.

This Father’s Day, I share some of these lessons learned from my dad with others – who I hope might not ever need them.