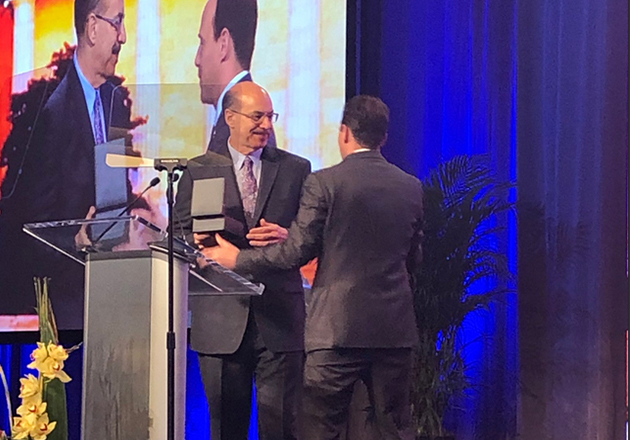 At the National Hospice and Palliative Care Organization’s 2019 Leadership and Advocacy Conference in Washington, DC, NHPCO Chief Operating Officer John Mastrojohn, III, RN, MSN, MBA, was presented with the Galen Miller Leadership Award in recognition of his many contributions to hospice and palliative care.

Mastrojohn joined NHPCO in 2006 to lead NHPCO’s quality initiative. He helped create and launch the original Quality Partners Program and developed education and quality metrics for hospice providers.  He led the NHPCO team’s involvement in palliative care initiatives, including serving on the Steering Committee for the National Consensus Project for Quality Palliative Care.

“John is recognized for his breadth of knowledge, skills and insights, and his willingness to share this knowledge for the greater good of others,” said NHPCO President and CEO Edo Banach. “He has been a tireless advocate for innovation, creativity and excellence in the delivery of care for patients nearing the end of life and their families.”

Mastrojohn became the Executive Director of the affiliate organization, National Hospice Foundation, in 2010. His commitment towards fundraising, that includes the annual NHF Gala, lead to the creation of the NHF Lighthouse of Hope Fund and expansion of the NHF Disaster Relief Fund.

During his tenure with NHPCO, Mastrojohn also served as Executive Director of FHSSA (originally founded as the Foundation for Hospices in Sub-Saharan Africa) and oversaw expansion of the organization into Global Partners in Care that went beyond sub-Saharan Africa to take this innovative partnering model to other nations across the globe.

Mastrojohn became Chief Operating Officer of NHPCO in 2014. Among his many contributions, he led efforts to honor the legacy of the hospice community through the development and launch of the exhibit, Hospice: A Historical Perspective, that went on permanent display at NHPCO’s office in 2017.

Since 2010, he has served on the selection committee for the Circle of Life Awards.

Additionally, he was instrumental in the rebranding of the organization that was unveiled at the Leadership and Advocacy Conference the day before this award was presented.

With more than 25 years of experience in healthcare leadership with two decades of work focusing on end-of-life care, he has been a tireless advocate for increasing access and enhancing quality of care. He served as founding director of Palliative Care and Hospice Services at Summa Health System in Ohio. Additionally, he served as a U.S. Fulbright Fellow in Hungary focusing on end-of-life care development.

Created in memory of Galen Miller, NHPCO’s executive vice president who died in August 2013, this award recognizes a champion and advocate from the field who has demonstrated the highest levels of dedication and passion for the hospice and palliative care community and the patients and families that receive care.