In The Media Unexpected “teachable” moments for hospice - ehospice 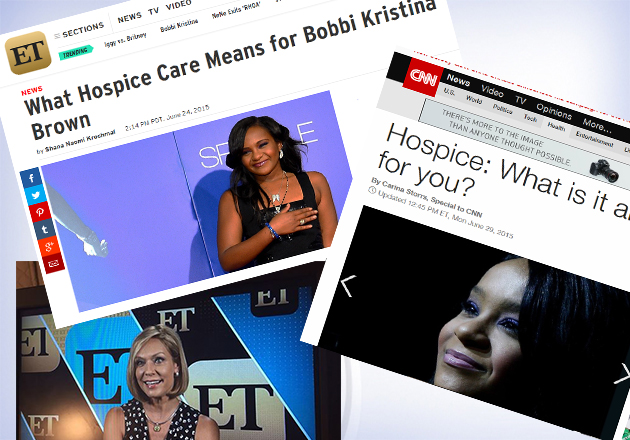 In mid-June, the media shared the news that Bobbi Kristina Brown, the daughter of the late Whitney Houston and Bobby Brown, was transferred to a hospice in the Atlanta area several months after a traumatic injury. Much of the attention was from popular culture and celebrity news outlets that are not the familiar news sources with which the National Hospice and Palliative Care Organization usually engages.

Many of these media sources wanted to explain to their readers and viewers what hospice was, what services would be provided, and why it might have been chosen by the family in this situation.

NHPCO communications team frequently helps journalists and media contacts understand how hospice works but this was an unusual situation. The media contacts clearly had little to no understanding of hospice care. An editor for one very prominent publication said she only had one question: “How many people a year does hospice cure?”

NHPCO found there were many misconceptions among the media, providing an opportunity to offer explanation and information in a constructive way that did not sensationalize this tragic story but provided needed context.

In the few days after the news broke, NHPCO staff spoke with a number of writers, editors and producers from outlets that included: CNN, Entertainment Tonight, E!, Hollywood Life, Inside Edition, National Enquirer, and People Magazine. While NHPCO has worked with CNN on a number of occasions and People Magazine in the past, many of these other media sources were ones popular with a public that might not be aware of options for end-of-life care.

NHPCO’s Senior Vice President for Strategic Communications Anita Brikman was interviewed on camera for the nationally televised shows Entertainment Tonight and Inside Edition.

Here are three representative news pieces that demonstrate how some media outlets are trying to inform their audiences about hospice care:

Since the first stories broke in the news, there has been significant increase in traffic to NHPCO’s websites www.momentsoflife.org and www.CaringInfo.org where there is a good deal of information available including tools to help someone find a hospice in their area.

This experienced served to remind the NHPCO communications team that the opportunity to engage with media and a news hook that becomes important may not be one that’s anticipated.