People & Places Kathy Brandt, A Hospice Expert Who Invited The World Into Her Own Last Days With Cancer, Dies - ehospice

Kathy Brandt, A Hospice Expert Who Invited The World Into Her Own Last Days With Cancer, Dies 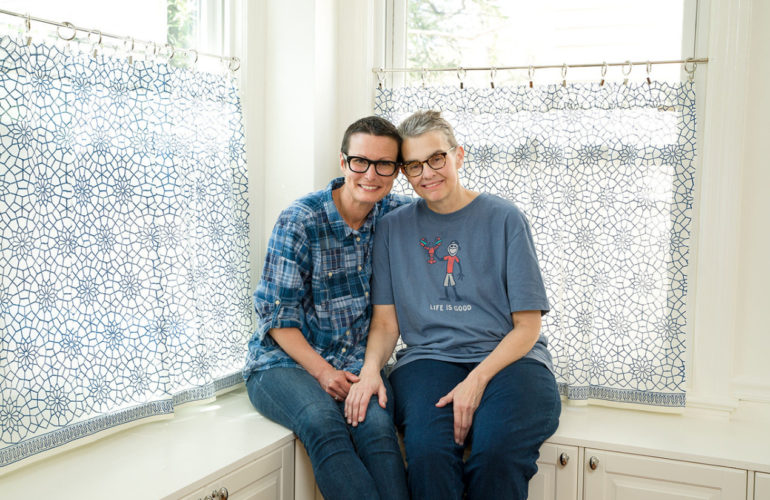 Photo: In January, Kathy Brandt (right) was diagnosed with stage 3 ovarian clear cell carcinoma and learned she had mere months to live. She is pursuing aggressive palliative care, forgoing treatments such as chemotherapy or radiation. (Andrew Propp for KHN).

Kathy Brandt, a hospice industry leader who turned her own terminal cancer diagnosis into a public conversation about choices at the end of life, died Aug. 4. She was 54.

Brandt’s death was announced on social media by her wife of nine years, Kimberly Acquaviva, 47, a professor of nursing and author of a book about hospice care for LGBTQ patients and families.

“I wanted all of you to know that Kathy had a peaceful death and your love and support is what made that possible,” Acquaviva wrote in comments posted to Facebook. “Our family has felt your love and we can’t begin to tell you how much it’s meant to us.”

Brandt died at the Charlottesville, Va., home she shared with her wife, their 19-year-old son, Greyson Acquaviva, and their dogs, Dizzy and Mitzi. She was diagnosed in January with stage 3 ovarian clear cell carcinoma, a rare and aggressive cancer.

For the past several months, Brandt and Acquaviva chronicled the day-to-day drama of dying in a series of frank, intimate posts on Facebook and Twitter aimed at demystifying the process and empowering other patients.

After researching her disease, which has a median prognosis of less than 13 months and often fails to respond to chemotherapy, Brandt refused drug treatment, declining what she regarded as “futile” medicine. Instead, she chose aggressive palliative care to manage her symptoms, to the dismay of some friends and family — and even her oncologist.

“If it’s not going to save my life, then why would I go through trying to get an extra month, when that month leading up to it would be terrible?” Brandt told Kaiser Health News in April.

The couple’s posts were followed by hundreds of well-wishers who donated more than $80,000 to help defray living expenses and medical costs. The essays and tweets were an unusually intimate window into the physical, emotional and psychological process of dying.

In April, Brandt described herself as a “dead woman walking” on the sidewalks of Washington, D.C., where they lived until June.

“It’s surreal trying to go about a ‘normal’ life when you know you aren’t going to be around in a few months,” she wrote.

During the last weeks of Brandt’s illness, Acquaviva tweeted about her partner’s bowels, posted photos of her sleeping and shared that Brandt was distressed about what would happen to her and to her family when she died.
The frank posts prompted concern from people who asked whether Brandt had consented to have her death live-tweeted for the world. Acquaviva replied:

“My wife @Kathy_Brandt is a hospice and palliative care professional, as am I. She decided early on that she wanted us to share her dying process — all of it — publicly so that she could keep educating people about death and dying until her last breath.”

A well-known hospice industry leader and consultant, Brandt spent three decades in the field and was most recently tapped to write and edit the latest version of clinical guidelines for quality palliative care.

The willingness of Brandt and Acquaviva to share an unflinching account of terminal cancer drew praise from fellow hospice and palliative care experts, said Jon Radulovic, a spokesman for the National Hospice and Palliative Care Organization and their longtime friend.

“As she did throughout her professional career, Kathy has continued to teach the field about compassionate care and patient self-determination,” he wrote in an email before her death.

Elena Prendergast, an assistant professor of nursing at Augusta University in Georgia wrote that she was moved by their experience.

“I have gone through this with family and with patients, but somehow you both have found a way. With your humor and raw transparency, you both make me feel like I am learning about this process for the first time,” Prendergast tweeted last month.

“If you’re ever diagnosed with a disease that will ultimately kill you no matter what you do, think through what you want the rest of your life to look like,” she wrote in a July 11 email. “Then seek out care that will help you make that version a reality.”

Acquaviva said they had worried that Brandt would not receive the care they’d hope for in a hospice setting — despite their long efforts to advocate for better conditions LGBTQ people.

In a post on their gofundme page, Acquaviva urged: “Do whatever you can to ensure that ALL LGBTQ+ people – not just those who know who to call or what to ask for – have access to hospice care provided by professionals who will treat them with dignity, respect, and clinical competence.”

Brandt asked that her obituary appear in the New York Times. It is scheduled to run next weekend, Acquaviva said, and it includes a final request that nods to the activism that characterized Brandt’s work on behalf of LGBTQ people and others who need end-of-life care.

“From the time that Kathy was diagnosed with clear cell ovarian cancer six months ago, she was clear with her family that the cause of death should be listed as the Trump Presidency in her obituary. In lieu of flowers, the family asks that donations be sent to whichever candidate secures the Democratic nomination, even if you really wish someone better were running.”

Kaiser Health News is a nonprofit news service covering health issues. It is an editorially independent program of the Kaiser Family Foundation, which is not affiliated with Kaiser Permanente.