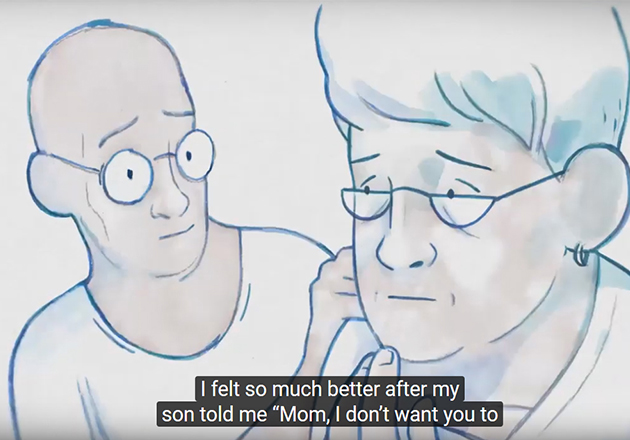 June 5, 2019 | No Comments
Categories: Education.
Tags: Alzheimer's and Our Stories.

(Pictured: Image from one of the campaign videos online.)

CHICAGO, June 3, 2019 — It’s a conversation no family wants to have — talking to a loved one about memory loss or cognitive decline. Close family members are typically the first to notice memory issues or cognitive problems, but they are often hesitant to say something – even when they know something is wrong. A new survey released today by the Alzheimer’s Association reveals that nearly 9 in 10 Americans say they would want others to tell them if they were showing signs of memory loss, thinking problems or other symptoms of cognitive decline. However, nearly 3 in 4 Americans say that talking to a close family member about memory loss, thinking problems, or other signs of cognitive problems would be challenging for them.

During Alzheimer’s & Brain Awareness Month this June, the Alzheimer’s Association aims to bridge the current communication gap with tools to help people talk about cognitive concerns sooner. A new national campaign created in partnership with the Ad Council is the first-ever collaboration between the two groups and features real stories of people who noticed cognitive changes in a family member and took the first, difficult step to initiate a conversation. Designed to help encourage conversations that may be difficult but could prevent a crisis and improve health options and outcomes, the campaign was created pro-bono by the community.

“Discussing Alzheimer’s is challenging for families and this campaign tackles the issue directly,” said Michael Carson, Chief Marketing Officer, Alzheimer’s Association. “Initiating conversations sooner can enable early diagnosis, which offers many important benefits, including allowing more time for critical care planning, better disease management and providing diagnosed individuals a voice in their future care. The ad campaign is designed to encourage and empower people to have productive conversations before a crisis occurs.”

Every 65 seconds someone in the United States develops Alzheimer’s disease. It is America’s sixth leading cause of death, affecting more than 5 million Americans and 16 million caregivers. Despite Alzheimer’s growing impact, many families struggle with discussing the issue.

Ed Ortiz, 52, from St. Helena, Calif., featured in the ad campaign, recalls the moment he knew it was time to have a conversation with his mother Cynthia Guzman. “My mom stopped at a stop sign and didn’t know what to do next,” he said. “It was an unsettling moment for both of us, but I knew she needed help.”

Guzman’s indecisive moment behind the wheel helped start a conversation that ultimately led to her Alzheimer’s diagnosis at age 63; she has had the diagnosis for eight years. “As difficult as it was receiving my diagnosis, I was grateful to have my son’s support,” she said. “He reassured me and he has been there for me ever since.”

“It’s understandable that many families are reluctant to express their concerns and initiate a conversation, but there are good reasons to do so,” said Ruth Drew, director of information and support services, Alzheimer’s Association. “Early detection and diagnosis puts individuals and families in the best position to navigate a devastating disease. Avoiding the conversation and letting problems progress is the worst thing you can do.”

The campaign demonstrates the importance of family members trusting their instincts and proactively raising concerns. The message, “When something feels different, it could be Alzheimer’s – now is the time to talk,” will be important for shifting people from being passive when they observe potential symptoms, to taking an important step and having a conversation.

By highlighting heartfelt, relatable stories of people who have been diagnosed with Alzheimer’s, this new critical campaign will help ease the challenges associated with starting this difficult conversation. We hope it will encourage audiences to notice the signs early, trust their gut, and have a talk. Having this conversation early can make a big difference in the lives of those who have been diagnosed and their families,” said Lisa Sherman, president and chief executive officer of the Ad Council.

Video stories of caregivers, including Ortiz, who saw the signs and started a conversation, are designed to help illustrate how other families can do the same. Additionally, the campaign’s website (ourstories.alz.org) offers families tools and resources, including customizable conversations starters, a list of early signs and symptoms of Alzheimer’s, benefits of early diagnosis, a downloadable discussion guide and other resources.

For resources to help start the conversation about cognitive concerns, visit Our Stories.  For tips on Approaching Memory Loss Concerns, visit alz.org.

In addition, the Alzheimer’s Association helps families and friends navigate challenges and considerations at each stage of the disease, through face-to-face conversations with experts in local communities, our free 24/7 Helpline (800.272.3900) and comprehensive support and resources on alz.org.