NHPCO and HAN Message in Memory of Representative Elijah Cummings 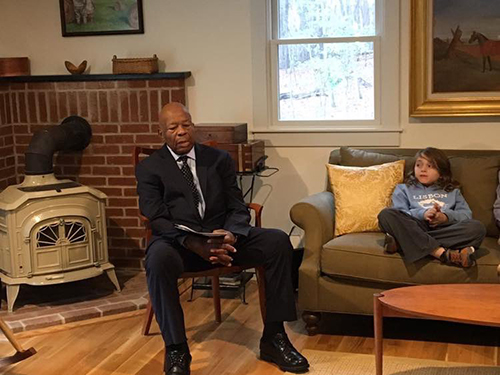 October 18, 2019 | No Comments
Categories: In The Media and People & Places.
Tags: Elijah Cummings.

Photo: Rep. Cummings at a fireside chat at the home of NHPCO’s President and CEO Edo Banach, whose son is pictured at the Congressman’s side.

The National Hospice and Palliative Care Organization and the Hospice Action Network extend deepest sympathies to the family, friends, colleagues and constituents of Representative Elijah Cummings who died on October 17, 2019 in Baltimore, at the age of 68.

A native and long-time resident of Baltimore, Rep. Cummings was an eight term Congressman representing Maryland’s 7th Congressional District in the U.S. House of Representatives which includes the city of Baltimore, Baltimore County, and much of Howard County. A democrat, he was chairman of the House Oversight and Reform Committee.

Rep. Cummings dedicated his life to public service and is recognized for his commitment to civil rights, equality, access to quality healthcare and education, clean air and water, and a strong economy defined by fiscal responsibility.

“I knew Congressman Cummings and welcomed him to my home. His passion and commitment to those he served extended to his community, the state, and the nation and his faith in democracy and those he served was so apparent in his words and actions,” said NHPCO President and CEO Edo Banach.

NHPCO and HAN honor Congressman Cummings for the powerful legacy he leaves behind.