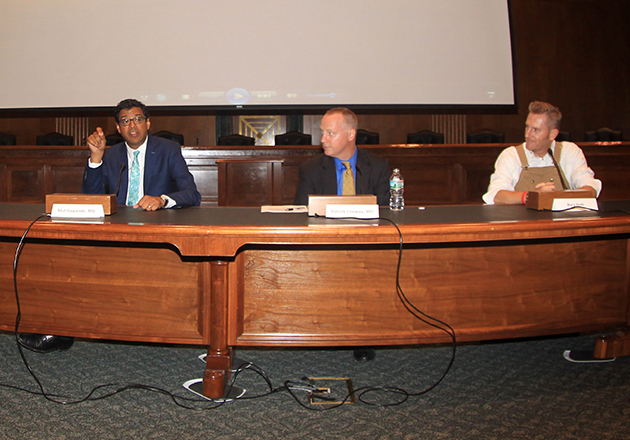 The event held in the Dirksen Senate Office Building, on June 22, 2016, was designed to educate Members of Congress, congressional staff, policymakers and other stakeholders about  the challenges the health care delivery system has serving individuals with advance and life-limiting illness and their families.

Several Members of Congress shared their personal stories about hospice and the end-of-life experience.  Senator Mark Warner (D-VA) shared the story of his mother, who suffered advanced dementia and was non-verbal for 9 years. He spoke of his family’s pain in caring for and making decisions for his mother – who had no advanced directive and could not speak for herself — fearful that they were making choices that wouldn’t comply with her wishes. Congressman Phil Roe (R-TN) shared his perspective as both a physician who struggled to support patients with advance illness, and as a husband watching his wife quickly succumb to late-stage cancer.  And Congressman Tom Reed (R-NY) talked poignantly about his own mother’s experience with hospice care, and how it inspired him to become a hospice volunteer.  Congressman Earl Blumenauer (D-OR) discussed his latest legislative effort,  the Personalize Your Care Act, a bill he had introduced just that day to help promote advance care planning and allow for concurrent palliative and conventional care.  Senator Susan Collins (R-ME) spoke of her efforts, as Chair of the Senate Aging Committee, to bring more attention to these important issues.

Following the screening, the audience was treated to a panel discussion featuring the book’s author, Dr. Atul Gawande, as well as CMS Chief Medical Officer Patrick Conway, and Rory Feek, a Grammy-nominated country singer and caregiver to his late wife, Joey.  The panelists provided a range of perspectives about end-of-life care, how physicians might do better, the role of patients and families in advocating for themselves, and the importance of federal policy in promoting early advance care planning and access to hospice and palliative care.  Rory’s story was especially heartfelt, as he shared a preview of an upcoming documentary he’s releasing entitled “To Joey, with Love.”

In all, the event succeeded in re-igniting the dialogue on Capitol Hill about end-of-life care, and brought greater attention to and support for our important legislative initiatives. To keep the ball rolling, make sure you contact your Legislators about the Care Planning Act (Senate) and Personalize Your Care Act (House). You can also see video clips of the event on the Hospice Action Network Facebook page.

Special thank you to the Hospice Foundation of America and the The John and Wauna Harman Foundation, whose mission is to improve end-of-life care in America by encouraging all Americans to have meaningful conversations with family and loved ones about their end-of-life care wishes before serious illness occurs, thereby improving quality of life as death is near.