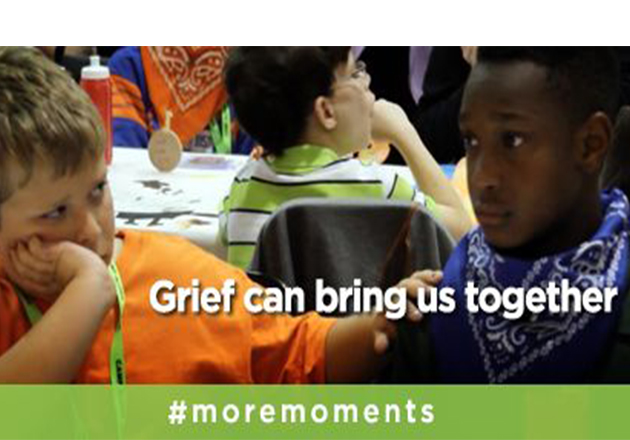 Savannah had been hot and humid all week, but a Thursday storm had broken the heat wave for the weekend.  I was on a trolley headed for a children’s grief support camp hosted by Hospice Savannah, where myself and a film director would be immersed in the camp’s activities for two days.  The National Hospice and Palliative Care Organization had given me the assignment of documenting the camp in its entirety.  I flipped through my shot list as my cellphone reception faded to zero bars. As I look back, I now realize how truly unprepared I was for this assignment, how unprepared I was to witness grief through a child’s eyes.

Camp Arrival
Upon arrival, the campers were greeted by a crowd of volunteers who warmly welcomed them with smiles and applause.  As I stepped off the trolley a young female volunteer pulled me aside and asked me, “Are you here to film the camp?”  I replied with a casual, “You bet”.  She smiled at me passively and said in a soft voice, “That’s so wonderful.  This camp will change you”.  Although this comment made me pause for a moment, I quickly snapped back into business mode.  I had a project to complete.

But the words of the young hospice volunteer echoed in the testimonies of the rest of the staff.  They described their time working at the camp as “life-changing” and “eye-opening”.  I began to wonder, what did they know that I didn’t know?  What was I missing?  All I saw were kids being kids –children brimming with energy who didn’t seem to have a care in the world.  But these weren’t carefree children; all had been touched by loss and were struggling with grief.

The Opening Ritual
A staff member raised her hand in the air and stood silently.  The campers saw the signal and mimicked her as well, mouths closed and hands raised.  I sat in the back of the large room and nonchalantly listened to the opening remarks.  The comments were standard – camp rules, adherence to the buddy system and so on.

But then the woman with light grey hair said, “I’m now going to read you all a story, please listen and think about how you relate to it”.  My director and I decided this was as good any opportunity to grab some b-roll footage of the campers quietly listening to the counselor.  We set up our cameras, and the story began.

The narrative was about a young native-American boy who had lost his father in a boating accident.  It talked about the feelings the child had – feelings of deep depression, of guilt and of anger.  I began to think to myself, “Is this story appropriate for children?”  And no sooner did this thought cross my mind then a loud screech erupted from the far side of the room.  A young girl leapt from her chair and sprinted towards the side exit, sobbing loudly.  And as I watched a camp counselor tail the young girl out of the meeting room, I also saw the faces in the crowd.  Some children sat with their heads buried in their arms, while others tried to comfort those around them.  But almost every child had a tear-stained face.

As the story continued, more children abruptly excited the room in varying degrees of hysterics.  I glanced across the room and made eye contact with the young female volunteer who spoke to me when I first stepped off the trolley and she gave me the same passive smile.  These children were exiting because their sadness had become too much for them to hold inside.  It then became apparent to me that I knew nothing about grief.

A Day at Camp
The camp’s atmosphere the next day was deceptively pleasant.  Although the central activity of this camp was talking about and understanding grief, all around me I saw children playing games, running freely and laughing.  The campers rotated between activities; some participated in games, while others participated in more serious endeavors.  As my director and I roamed the camp, we saw a group of young boys through a window who were writing diligently.  I told the director to continue to film the camp’s activities and that I would catch up with him later.  I quietly opened the cabin door and grabbed a seat in the corner, away from the young authors.

They were writing letters – letters to their loved ones whom they had lost.  The adult activity leader assured them that they were in a safe place and could share what they were feeling.  Despite this encouragement, the boys continued to focus on their letters with looks of anguish on their faces.  A young African-American teen then declared in a loud but shaky voice, “He drowned.  He fell into the river and drowned.”  The boy erupted in tears while the others tried to console him.  His closest friend had met an early end in the unforgiving currents of the Savannah River.

As I watched the group, I felt my heart drop into my stomach.  I wanted to offer comfort as well; I wanted to tell them that everything would be ok.  But the truth is, everything wasn’t ok.  These boys had come into contact with death far too young and were being forced to confront grief too soon.

…Continue reading this blog on the website Moments of Life: Made Possible by Hospice – Alex shares reflections on dinner with the counselors, his experience around the campfire, camp confessions from young participants, and more.

* * *
The camp’s events were captured on film and are chronicled in the video Grief through a Child’s Eyes featured on the Moments of Life: Made Possible by Hospice website.