In The Media ‘Wisdom and Fear’ Lead 90% of U.S. Seniors to Covid Vaccines - ehospice

‘Wisdom and Fear’ Lead 90% of U.S. Seniors to Covid Vaccines 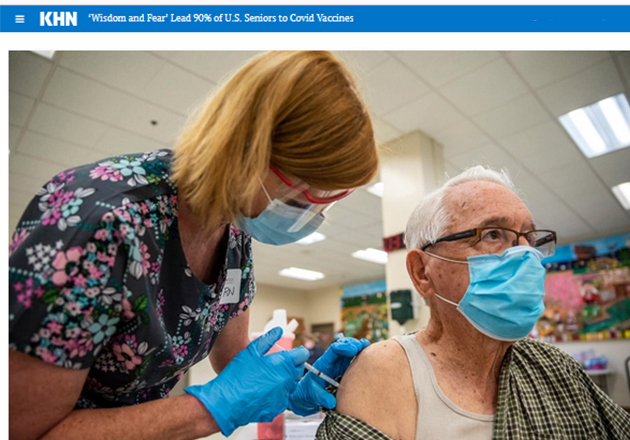 Amid the latest surge in covid-19 cases and hospitalizations, the United States on Tuesday hit a milestone that some thought was unattainable: 90% of people 65 and older are at least partly vaccinated against the disease.

That’s more than 49 million seniors vaccinated. Overall, 70% of adults have been inoculated, at least partly, and nearly 68% of people over 12.

“This really shows our elders are wiser than the rest of us,” said Dr. David Wohl, professor of medicine in the division of infectious diseases and director of the vaccine clinics at the University of North Carolina School of Medicine.

Wohl said political leanings that have skewed vaccination rates across the country have had much less of an impact on older adults. “The threat of covid-19 is so real for those 65 and over that it transcends many of the other issues that are complicating vaccination rates,” he said. “Wisdom and fear have really led to impressive immunization rates.”

The pandemic has been especially vicious to older adults. Nearly 80% of deaths have been among people age 65 and up. Nursing homes and other long-term care facilities were hit hard, and many banned family members and other visitors from entering, isolating residents. Even older adults living at home often kept their distance from family and friends as they sought to avoid the coronavirus. So when vaccines became available in December, many states targeted seniors first.

That effort has proved successful, although rates vary among states. Hawaii, Pennsylvania and Vermont vaccinated more than 99% of their seniors, while West Virginia ranks last with 78%.

In Connecticut, 96% of people 65 and older are vaccinated against covid. “I didn’t think we would get that high, and I am really pleased about it,” said Dr. Thomas Balcezak, chief medical officer at Yale New Haven Health. “But until everyone is vaccinated, older folks are still at some risk, though their risk of severe disease or death is much less.”

He said older adults clearly heard the message that they were in danger from covid and the vaccine could help. “But saying older folks are at highest risk was a double-edged sword” in terms of messaging, said Balcezak. “That’s because younger adults heard that and it may have given them a wrong sense of security.”

The Yale health system’s five hospitals had 57 covid patients as of Monday, he said. In contrast, in April 2020, as the virus was taking hold across the country, the system had about 850 covid patients.

Another factor in the successful push to inoculate older adults is that they have been exposed to vaccines more than younger adults, said Wohl. Seniors typically are counseled by doctors to get immunizations for flu, pneumonia, shingles and other diseases that are especially risky for them. And many likely remember getting the polio vaccine when it first came out in the 1950s.

“This is not their first vaccine rodeo,” Wohl said.

In contrast, many younger adults may not have been vaccinated in several decades since getting their mandatory immunizations before grade school, he said.

The hesitancy among some unvaccinated younger adults appears stiff. A KFF survey released Wednesday found 53% of unvaccinated adults believe the vaccines pose a bigger risk to their health than covid. Only about a quarter of those who have not yet received a shot said they will likely get immunized by the end of the year, according to the survey of 1,517 adults conducted July 15-27. The margin of error is plus or minus 3 percentage points.

“This is an incredibly significant milestone, given how devastating the impacts of covid-19 were on seniors,” said Jen Kates, a senior vice president at KFF. “Reaching this goal is likely a function of a few key things. First, seniors were scared — they saw the impact on their cohort. Second, seniors were the first group to be targeted for covid-19 vaccine distribution. And third, the push to vaccinate seniors came from all sides, Republican and Democrat, national, state and local. This was a concerted effort at a level we have not seen for most other population groups.”

Dr. Mark Roberts, professor and former chair of the Department of Health Policy and Management at the University of Pittsburgh Graduate School of Public Health, cautioned that the success of the vaccination push among seniors doesn’t mean others in this age group can grow complacent and think they are protected via herd immunity.

“Herd immunity is a local phenomenon,” he said. “If people around you are not vaccinated in your local bubble, you have not reached herd immunity.”

Officials at AARP, which has been running an education campaign to get older adults vaccinated, said the 90% threshold marks a major victory, but the campaign is not over.

“This is a real success story in vaccine distribution,” said Bill Walsh, vice president of communication, who is leading the organization’s efforts on covid. “Ninety percent is a great figure, but we want everyone to get vaccinated.”