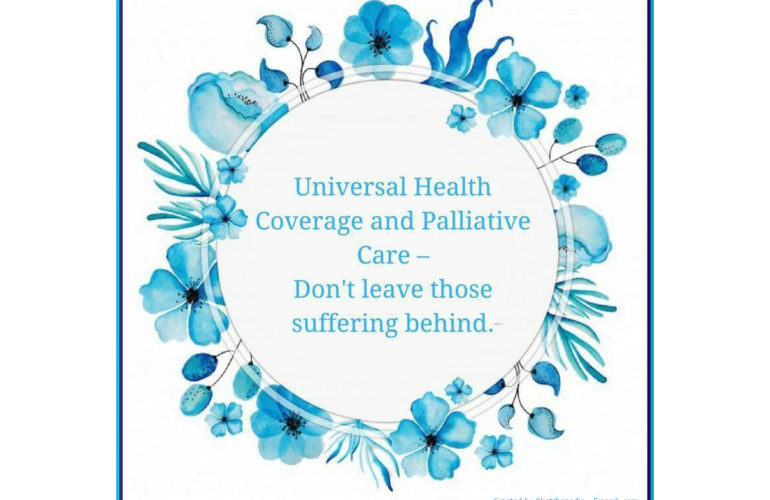 Universal health coverage (UHC) means that all people and communities can use the promotive, preventive, curative, rehabilitative and palliative health services they need. Palliative care is an essential, defining part of Universal Health Coverage, but it is very seldom included in national UHC packages, meaning that at their sickest, people are deprived of the care they need to relieve their suffering. We must bring UHC including palliative care to those who need it most.

Universal Health Coverage, including palliative care, is critical to achieving the UN Sustainable Development Goals, aiming to eradicate poverty by 2030. UHC means everyone must be able to access the health services they need, including palliative care, without being forced into financial hardship. Financial risk occurs through paying for costly treatment not covered by national health systems. Households with people with life-limiting illness may face high costs and potential financial hardship for futile treatments.

Coinciding with this year’s World Hospice and Palliative Care Day, a major Lancet Commission report is being released titled: “Alleviating the Access Abyss in Palliative Care and Pain Relief: an imperative of universal health coverage.” This new report highlights the continuing problems with lack of access to palliative care and pain relief, especially in low and middle income countries where about 80% of the need exists.

The new Lancet Commission report estimates that 25.5 million people worldwide die each year with serious health suffering, in need of palliative care. Another 35.5 million require pain relief prior to the end of life. The new figures are higher than previous estimates made by WHO and WHPCA (2014) of 20 million at the end of life and 40 million total. This is because total mortality is increasing, measurement of suffering has been improved, and the Lancet Commission includes categories that were not previously considered such as injuries, hemorrhagic fevers, and some other chronic conditions.

To download a copy of the Lancet Commission Report go to: http://www.thelancet.com/commissions/palliative-care

WHPCA Executive Director Dr Stephen Connor, a member of this Lancet Commission Scientific Advisory Board and one of the co-authors of the report notes: “The need for palliative care is growing and greater than ever, yet progress in access to care is moving too slowly. Governments and leaders in health care around the world must realize that unnecessary suffering can be avoided and that palliative care is essential to universal health coverage.”

Find out more about World Hospice and Palliative Care Day online, and join the conversation on Twitter using the hashtag #WHPCDay17.