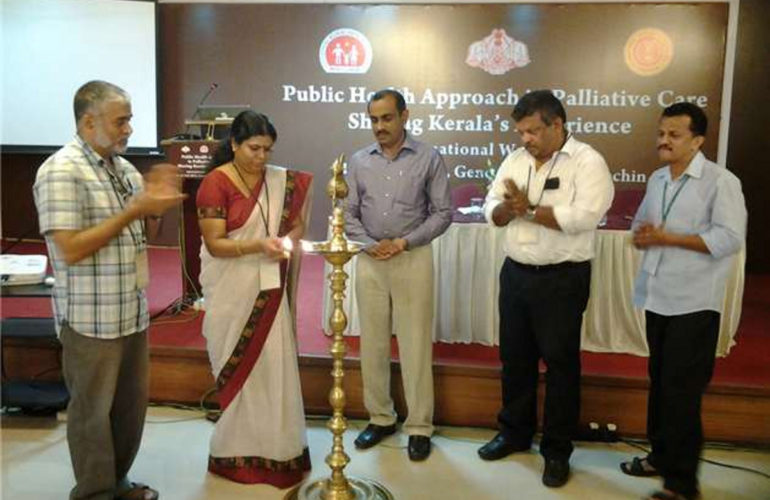 The involvement of Local Self Government Institutions (LSGI) and active participation of the community are identified as the key components in the development of palliative care in Kerala. This was highlighted in the workshop organized by National Rural Health Mission (NRHM) at Ernakulam on 11th and 12th of February 2013 to share “Public Health Approach in Palliative Care- Kerala Experience”.

“All LSGIs are running this project with community participation. NRHM is planning to initiate more training programmes in palliative care through the Kerala Institute of Local Administration (KILA) and Health Service. NRHM is also planning an impact study which will help to assess the practical aspects to replicate the project in other regions in India,” he said.

Dr P. K. Jameela, Director of Health Services, Kerala sated that: “The home care project has covered 80,000 patients in 2012 in Kerala. Tertiary and secondary level programmes have been started in 74 government hospitals. Training centres were started in 16 places. To start separate department for palliative care in Medical Colleges in Kerala is under consideration.”

The workshop started with a description of the evolution of the Kerala model in palliative care by Dr Suresh Kumar, Director, Institute of Palliative Medicine, Calicut, which is the state resource centre for NRHM ArogyaKeralam Palliative Care Project.

Dr Kumar discussed the three major paradigm shifts in the development of community based palliative care services in Kerala.

He continued by noting that in the context of interaction with government, the options are ‘Exit’ (disengage from government), ‘Voice’ (active engagement) and ‘Straddling’ (fluctuating between the two options).

Dr Kumar identified 4 major challenges before existing community model in Kerala. They are:

Dr Mathews Numpeli, (Medical Officer for NRHM Palliative Care Project) described the structure of primary, secondary and tertiary levels of the palliative care programme in the public health system, especially the involvement of the Local Self-Government Institutions in palliative home care services. The evolution of community based organizations in the field of palliative care was outlined by Dr Divakaran (Director, Institute of Palliative Care, Thrissur).

Dr Jan Stjernsward and Dr Cecilia Sepulveda of World Health Organisation spoke about the WHO approach in palliative care and non-communicable diseases. They pointed out that the Kerala experience was a true reflection of what the WHO considered community based public health oriented palliative care.

The programme concluded by reflections from national and international delegates about the replicability of the Kerala model elsewhere. David Praill (Co-chair, Worldwide Palliative Care Alliance) addressed the challenges in replicability and highlighted examples of UK initiatives that were inspired by the Kerala model.  Plans for collaboration with various national and international projects are on the cards, while strengthening those collaborations that already exist.