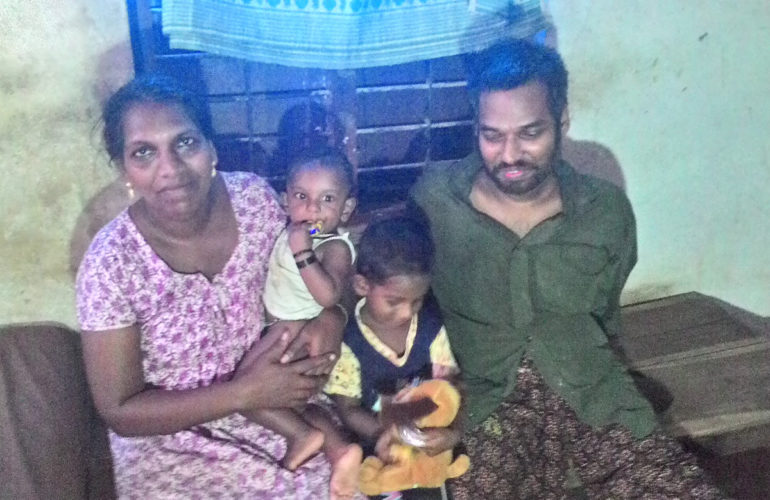 As of now, Rajesh is unable to use his limbs, and needs support for all activities of daily living. His wife cannot work because the children would have no one to care for them.

Several social support schemes have been started by the government in India in the last few years. This can result in people being granted loans, with no plan to protect them should they find themselves unable to pay it back.

Rajesh benefited from one of these programmes and the net result is that he is now in danger of being thrown out of his home.

We do not know of any poor homes that would take in such a whole family and care for them. Where would they go? We fervently hope that someone will take the trouble to analyse what has been done and to measure the outcome.

Take Rajesh’s case. He applied for a loan and got it sanctioned from a bank. He started a small business – a shop. It was thriving, and he invested all the profit in the repayment of the loan.

That was perhaps for about a year and then, progressive deterioration of his muscle strength forced him to give up the shop.

By that time, Mini was already a mother and, having to look after both the husband and the child, she was unable to go for any work.

They had to live on hand-outs. The monthly instalments for the loan lapsed and now the family are in risk of losing the home.

The bank waived part of the loan, but insists on the repayment of the rest of it. Time and again, we see the same pattern. Very poor people being offered loans, which eventually destroy the whole family.

More about social support: Rajesh had a home in the middle of paddy fields, which would flood every monsoon season, making it very difficult for him to live in.

The local self-government institution gave him a new plot of land, and gave a small amount of money. With the support of friends, he built a humble house and moved.

In the process, he lost the old home where poor people like him had lived around him and there had been support from within the community.

In the new place, the affluent people who live around him alienate him, and he is a lonely stranger. The support system from within the community has failed.

Pallium India is offering him what little support we can. Rajesh desired that we should give visibility to his plight and hence, on his insistence, we are showing his picture here.

Rajesh hopes that someone will come forward to help till the children are grown up enough to go to school so that Mini would have some hope of finding employment.

Rajesh, we admire your courage and your ability to smile even in the face of adversities. We promise to continue to do what we can and wish you and family the best.