Compassion and Care for young Allan 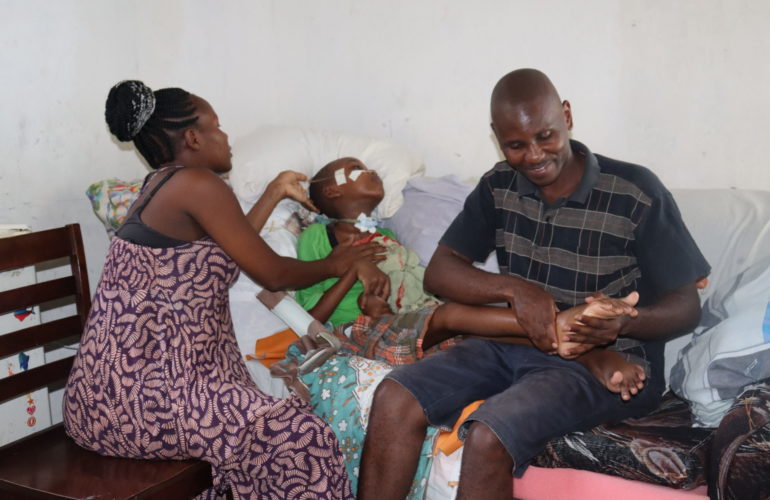 May 24, 2021 | No Comments
Categories: Care, Community Engagement, Featured, and Policy.

“It hurts a lot to see my son in this condition. I remember the way he was before the surgery and it hurts me to see him suffer like this.” Lucas Abiyo.

We visited Lucas and his family in his home in Malindi sub-county – Kilifi County accompanied by a palliative care nurse from Malindi sub-county hospital Palliative Care Unit (PCU). We drove several kilometers and branched off to a murram road leading to their home. We were met by his wife Eunice who greeted us and welcomed us into their house. We found Lucas attending to his son Allan on the sofa, and he welcomed us and introduced his wife and son Allan to me and the team. 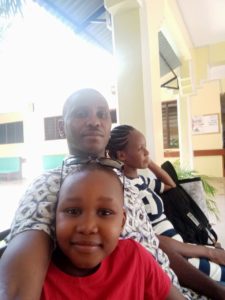 Allan with his father and mother before the surgery 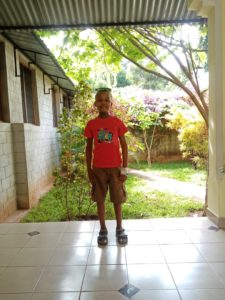 Allan Abiyo before the surgery

“Allan Abiyo was born a bouncing baby boy in 2012. We were so close. We had a tight bond. We did everything together and went everywhere together. Allan was doing well until July 2020. He developed tonsillitis and we were advised by doctors that they could be removed surgically. We enquired further and we were told of two other cases where children had the same condition and the surgeries were successful. Parents want the best for their children and we thought it would be best for Allan if he had the surgery.” Says Lucas.

Lucas adds, “We were told that the surgery would not take more than one hour. The surgery took longer than expected. We saw the surgeon and nurses pacing in and out of the theatre and we sensed something was wrong. After a while, one of the doctors called my wife and I. He told us that Allan had a cardiac arrest after the anesthesia was administered. This affected the blood flow to his brain. We were transferred to a private hospital in Mombasa, a 2 hours’ drive from the hospital where the surgery took place. Allan was in a bad condition and he was admitted to the Intensive Care Unit (ICU). He needed assistance in breathing. He had developed respiratory problems after the surgery.”

That was just the beginning of the challenges Lucas and Eunice had to face. Nothing could have prepared them for the challenges they were to face following the botched surgery. Unfortunately, more bad news was to follow. 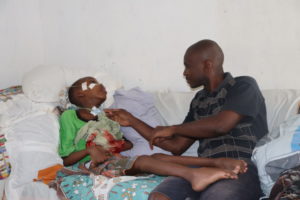 “We were advised that Allan should have a second operation in the hospital in Mombasa. We were very skeptical because of the results of the first surgery. This was to help Allan to breathe better and after being persuaded we thought it would be best for the procedure to be done. A tracheostomy was done and an artificial trachea was placed in his throat to help in breathing. He has paralysis in the throat.  Allan also has a feeding tube that runs through his nose.” Said Lucas. 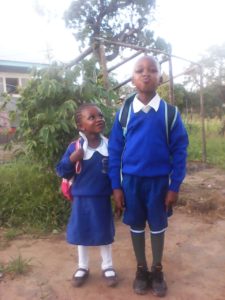 Allan and his younger sister before the surgery

As Lucas was narrating what he and his family had been through, his daughter, Allan’s younger sister walked in from school. She was a bit shy but she greeted everyone in the sitting room. Eunice Omora, their mother who is expecting their third child said, “She understands her brother’s condition. She is very supportive and she tries to help where she can. It seems like she has come to terms with her brother’s condition.” 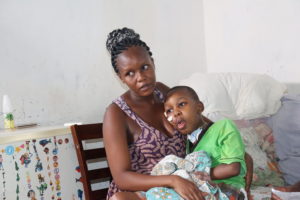 Eunice and her son Allan

“Allan had bacterial and fungal infections from the surgery. He was transferred to the high dependency unit (HDU). After spending a week in the private hospital in Mombasa, Allan was discharged and we were advised that home-based care would be best.” Said Lucas. 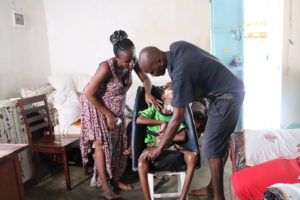 That is when they were introduced to the Malindi sub-county hospital PCU. The palliative care staff though few were able to help Allan with the infections. “The PCU advised us on how to take care of Allan including his massage therapy. Malindi sub-county PCU gave us an orthopedic chair which Allan uses to prevent stiffness of muscles. They also provided a special mattress for Allan to sleep on and to use for physiotherapy.” Says Lucas. 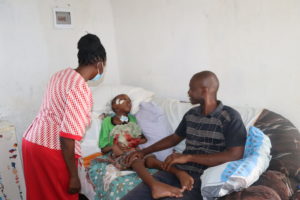 Alice Changawa a palliative care nurse during the home visit

Lucas adds, “We visit the PCU once a week and they also come for home visits. They bring us some food and they talk to us and give us psychological support. Alice the palliative care nurse has been very supportive of us. She visits us regularly.”

“We are angry at the hospital staff and management where the first surgery was done. They never took responsibility. We presume he was given an overdose of the anesthesia or the oxygen machine levels were not right. We wanted to take legal action but we decided to focus on Allan’s health because of the cost it would incur to hire lawyers and the whole process.” 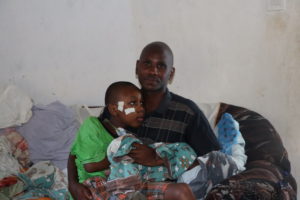 Lucas and his son Allan

Lucas is yet to accept that Allan could live in his current state for the rest of his life. “We have to take turns at night to watch over Allan. My wife and I take turns after every 2 hours, one of us wakes up to check on Allan. I have psychological issues and the peace we once had in this home is no longer there. This has become our burden and responsibility in life.” Said Lucas.

Lucas adds, “It hurts a lot to see my son in this condition. I remember the way he was before the surgery and it hurts me to see him suffer like this. We are grateful to the PCU in Malindi sub-county hospital for walking this journey with us. The cost of Allan’s medicine can run up to Ksh. 15,000 (USD140) per month.”

We hope that one day the family will be able to cope with the current predicament. Palliative care continues to be a critical and essential service even for children. In Kenya, about 1% of children who need this care receive it. There is still much that needs to be done to improve access to palliative care and to have it fully integrated in Kenya’s healthcare system through Universal Health Coverage (UHC).

This article was first featured in the Kenya edition of ehospice.