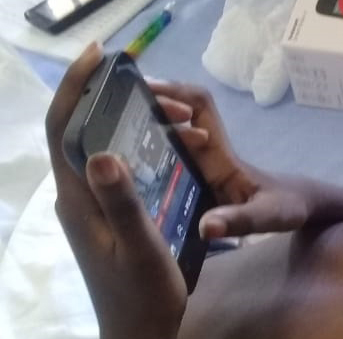 Denise Mortlock, director of The Rocking Horse Project in Eswatini (formerly Swaziland), shared this heartwarming story about Nandi (not her real name) with ehospice.

It reminds us that sometimes it just takes a little kindness to make an enormous difference in a sick child’s life.

Denise writes, “On Christmas Eve last year  I was visiting all the children in the Mbabane Government Hospital to determine their gender and ages. I needed this information to buy pyjamas from funds raised for this purpose through an appeal that had gone out to the Friends of The Rocking Horse Project. We had decided to ensure that each child in  the hospital on Christmas Eve would go to sleep in brand new pyjamas.

During my visit, I noticed a young girl (Nandi) crying inconsolably. I learnt that her doctor had just told her she was not well enough to go home for Christmas. On hearing this, I immediately made arrangements for The Rocking Horse Project to fund the transport of her beloved grandmother to come and visit Nandi in hospital.

Many tears were shed by all when her grandmother walked into the ward. Our play coordinator, Phetsile, reported that her gran said she never thought she would have the means or the opportunity to be able to visit her granddaughter in hospital, so far away from home.

As this child was totally bedridden, restricted to lying on her back and very weak, we had to come up with a way of making her life more comfortable. Having gained her trust, we were able to ask her to tell us what she would like. After much consideration she said she would enjoy playing games on a cell phone, as this would be light and easy for her to hold.

When Nandi was eventually discharged, The Rocking Horse Project funded the hire of a private taxi to take her from the hospital to the bus rank and, via public transport, to her home. We did this as she was still unable to walk and her mother could not carry Nandi and their luggage.

A while later, Nandi’s mother wrote to us, saying: “After my daughter received her cell phone, she started speaking in more than her normal whisper as well as smiling, and even laughing. Her appetite came back and she started sleeping well at night. The cell phone made her very happy and she started communicating with the other children on the ward and made friends with them. She laughed a lot. It’s like her happiness returned when she got the phone and I was so happy to see her happy.”

Never underestimate how such small interventions like this can turn a child’s life around!”

About The Rocking Horse Project

The Rocking Horse Project offers help and support for the physical, psychological, social and spiritual needs of children with life-limiting and life-threatening conditions, and their families. They aim to improve the quality of life for children and young people, working in hospitals, hospices and homesteads, offering support and encouragement to paediatric palliative care teams as they undergo specialist training, sharing expertise and skills.

Find out more about the wonderful work they do from their website.