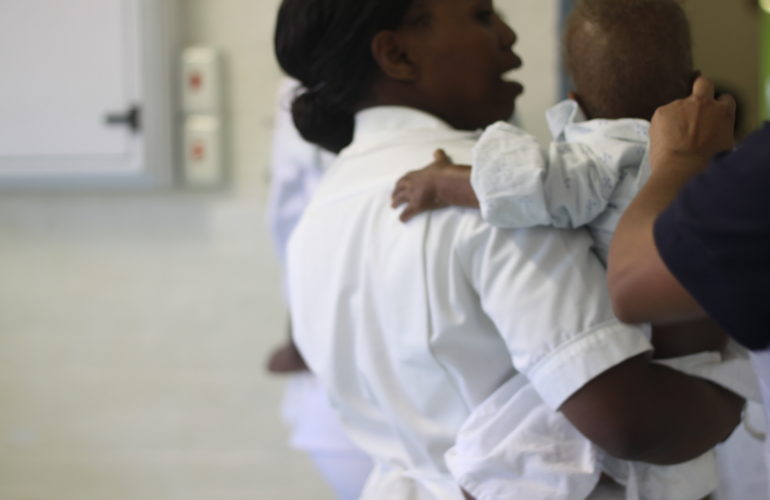 In a thought piece written by Dr Michelle Meiring, founder of Paedspal, a children’s palliative care programme based in Cape Town and chair of PatchSA, the paediatric palliative care national association, calls upon the country’s government to implement the policy on palliative care developed between 2016 and 2018.

Implementation of the policy would drastically improve the lives of thousands of children throughout the country who suffer unnecessary pain because health care practitioners are not sufficiently trained to recognise, treat or manage children’s pain.

I had a patient last year, a four-year-old boy, with a type of cancer called neuroblastoma. After initial treatment, the cancer came back, growing in the confined space between his spine and stomach, causing unbearable pain. His mother was a police officer; a strong, stoical woman who had seen a lot, but she was struggling.
After several weeks, using every available drug, including numbing him from the waist down, I managed to get the pain under control, and he died a peaceful death.
A month ago, a colleague in Durban asked for advice on managing a similar case. She didn’t have access to half the drugs I had (at Red Cross Hospital in Cape Town) and the nurses were refusing to administer even those that were available because they hadn’t been trained how to use them. The child died in excruciating pain.

The difference between my patient’s relatively good death and the nightmare one of the Durban child is access to proper pain relief within an effective paediatric palliative care system.

There are only a few places in South Africa offering proper pain relief, despite the fact that at least a million children are dying from – or living with – incurable conditions. Frustratingly, efforts to remedy this unacceptable situation have ground to a halt.

In 2010, the Hospice Palliative Care Association of South Africa (HPCA) initiated an alliance that hospices, professionals working in palliative care, academics and some officials from the Department of Health. A draft policy was created but never implemented.

Plan never implemented
A turning point came in 2014 when South Africa co-sponsored a resolution at the World Health Assembly in Geneva which called on all member countries to integrate palliative care into the hospitals and community care structures. A section of the resolution highlighted the need for policy-making that was tailored towards the needs of children.

We heard nothing from government until July 2016 when the Health Minister, Dr Aaron Motsaoledi, appointed a 12-member steering committee to develop a palliative care policy. I was invited to represent paediatric palliative care. The policy was approved by the National Health Council in 2017 and by 2018, we had developed an implementation plan. It was quite an ambitious plan, which included:

However, it seems that the plan is not being implemented because of financial constraints. A budget was created but not approved or allocated.

We showed that palliative care is cost-effective. The problem with medicine is that we are so cure-focused that we are stumped if we can’t cure a patient. Palliative care comes in at that point – even if we can’t cure, we can manage pain and distressing symptoms. With the proper support, patients can be cared for at home and in the community. With proper counselling, the family of a patient with an incurable condition can accept it early on, avoiding unnecessary, futile interventions. We have patients all across the country being admitted to intensive care units when we should call it quits beforehand and support the family through that end phase.

Public meeting to be held
In an attempt to regain momentum, we have called a public meeting in Johannesburg on 18 March which will include all stakeholders in paediatric palliative care from both government and the NGO sector.

We hope to emerge with achievable goals. If the national policy is not affordable, what can practically be done in the short term?

Practical steps government can take now
We could look at how to make drugs more available. We could train people already on the ground to use those drugs. We could train social workers to better support families.

We should also extend the Care Dependency Grant. This is a grant to families with very sick children: it funds travel to doctor appointments and to fetch medication, as well anything else the child might need such as more nappies or formula.

Currently, the grant is terminated in the month of the child’s death. Yet we see so many cases where a single mother has had to give up her job to care for the child and has been relying on the grant and suddenly she is left destitute. Would it not be possible to extend the grant by three months so that she can get back on her feet and feed her family again?

Another problem is access to up-to-date pain relief. Many pain drugs we use for children are off licence, which means that insufficient studies have been done to see if they are safe in children. This poses an ethical dilemma as you don’t often get consent to do studies on these very vulnerable children. So a lot of prescriptions are based on “expert opinion”.

While South Africa’s Essentials Medicine Committee has agreed to include some drugs for the management of symptoms other than pain in the Essential Drugs List where the only available evidence is expert opinion, this still leaves us without certain medications that are being used internationally by paediatricians to manage difficult pain in children.

If that rule were lifted, ordeals such as that suffered by the little Durban girl would be averted overnight.