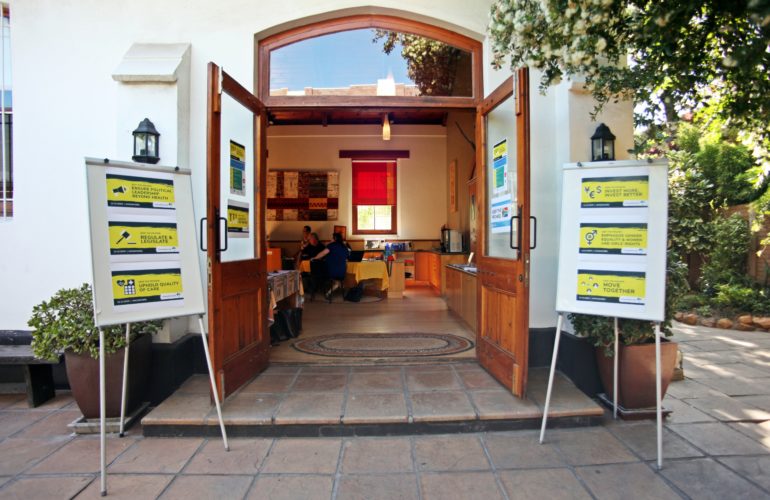 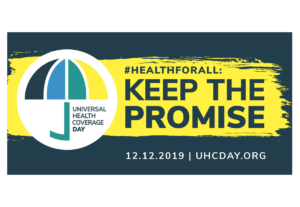 The International Children’s Palliative Care Network (ICPCN) secured a micro grant from UHC 2030 to arrange an event to mark UHC Day 2019. On 12 December ICPCN in collaboration with the University of Cape Town’s Primary Health Care (PHC) Directorate, PatchSA, Paedspal and the Hospice Palliative Care Association (HPCA) of South Africa hosted an inspiring event aimed at raising awareness of Universal Health Coverage.  This pioneering meeting brought experts in the fields of Primary Health Care, Paediatric and Adult Palliative Care, Children’s rights and the Peoples Health Movement together and created a unique opportunity to discuss Universal Health Coverage and implications for the National Health Insurance Bill in South Africa.  In addition the morning programme was infused with a number of creative contributions aimed at foregrounding key issues relating to UHC. Organisers had recognised the general lack of information around UHC and were keen to draw a mixture of health care professionals and community members. 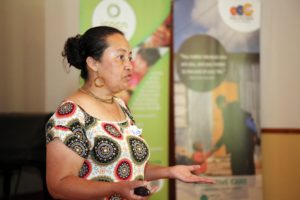 Alex Daniels from ICPCN welcomed the  audience to the event and provided a brief overview of UHC concepts flagging resolutions that led up to the momentous UN High Level Meeting on 23 September 2019 that marked the adoption of the political declaration on universal health coverage.

Prof Steve Reid, Director of UCT’s PHC directorate shared experiences from Brazil’s Family Health program, Programa de Saúde da Família (PSF) launched over 15 years ago – through this impressive programme, 45,000 Family Health Teams provide treatment, prevention and health promotion to 45 million people living in rural communities in Brazil. The potential for collaboration between public and private sectors in South Africa was raised through utilising the strengths and assets of both approaches. Prof Reid advocated for a shift away from some common metaphors used in health care for example “fixing” a machine and “war” on disease to include the recognition of the “burden” of disease and illness as a “journey”.   Central to Primary Health Care is the involvement of the community and this element of social solidarity is absent from the current NHI bill according to Prof Reid.

Dr Ewa Skowronska, HPCA’s newly appointed Chief Executive Officer, in her presentation entitled “Palliative Care for all” raised the cost implications for households affected by serious illness and end of life care. This impacts on families already struggling economically rendering them more vulnerable to catastrophic health expenditures. In South Africa, hospice and palliative care services are provided by independent organisations, with less than 10% funding provided by the government and only a very small proportion funded by private health insurance. The majority of hospice and palliative care takes place within communities in SA and currently 103 hospices provide care and support to 100,000 patients every year.  Dr Skowronska believes that to promote equitable access, palliative care services must be universally available and free of charge.

Dr Michelle Meiring, chair of PatchSA (Palliative Treatment for Children) and founding director of Paedspal (an NGO providing paediatric palliative care service) focused on some of the barriers to providing paediatric palliative care and discussed how we can ensure ‘no one is left behind’.  Dr Meiring raised some of the fears encountered within a paediatric context relating to the death of a child, this included: fear of failure experienced by parents, the child and professionals, fear of administering opioids and other drugs to children, a small though growing evidence base and fear of having difficult conversations and making difficult decisions around the care of a child. Whilst in SA significant progress has been made with the national Department of Health approving a Palliative Care Policy in April 2017 this has not been implemented due to a lack of funding. The WHO’s public health model was highlighted as a means to “Keeping the promise” for children and families with palliative care needs ensuring “No one gets left behind”.

Prof Louis Reynolds represented the Peoples Health Movement. He shared three principles that has shaped National Health Insurance (NHI) for all South Africans: a) access to affordable and acceptable quality health services as a constitutional right; b) the responsibility of the State to ensure health for all South Africans; and c) funding of the service in an equitable manner that promotes social solidarity. He highlighted the high level of inequality in South Africa and the burden this places on the public sector with fewer resources available for those who try to access health care resulting in an unequal and fragmented health system. He believes the Bill offers little in terms of how to ‘fix the public sector’ such as improving capacity and management and this comes with the potential risk of “further entrenching inequality”. While Peoples Health Movement remain in favour of the principles of UHC espoused in the current NHI bill, they are calling for a concerted effort to strengthen community oriented care in resistance to a continued focus on hospicentric curative care models.

Lori Lake from UCT’s Children’s Institute shared information from the recently launched Child Gauge arguing that child and adolescent health matters not only for children today, but because it impacts on the trajectory for health and development across the child’s life course.  Lori described the child’s right to health that included the right to be respected within the health care system taking into account their dignity, privacy and participation as a powerful framework for addressing these complex challenges and suggested that a child-centred health care system needed to extend beyond Universal Health Coverage to Universal Health Care. 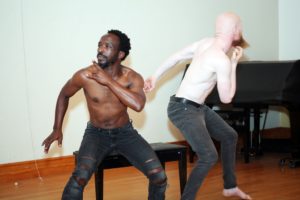 Creative components of the programme included a powerful performance from Andile Vellem and Siphenathi Siyekiso representing UNMUTE Dance Company.  Through their breath movements the dancers depicted both the strengths and vulnerabilities faced by men encouraging us to live together in love and harmony, particularly relevant in a society plagued by violence. Their dance can be seen here.  Melissa Ellse, a music therapist, facilitated a lively session that encouraged the audience to listen to themselves and those around them through a creative and fun body percussion activity. The morning programme ended with Martin Hoybye, (#cowritewithmartin) a song writer from Denmark sharing a song he had written especially for UHC day. The song was inspired by words/ phrases the audience had shared during the first part of the programme and can be heard here.

Whilst much media coverage had been given to the issue of the National NHI bill, for many attending the event hearing about Universal Health Coverage was a new experience.

The Cape Town based UHC event was successful in that it created a platform for all stakeholders to share information, engage, network and hold robust discussion around what UHC means for South Africans as we strive to collaboratively move forward ensuring “No one is left behind”.

When asked “What will you take with you?” one participant said:

“Putting real meaning of life, livelihoods, health and health needs, policies and constitutional matters professionally alongside the arts and getting both sides to speak so well to one another. Thank you this was great