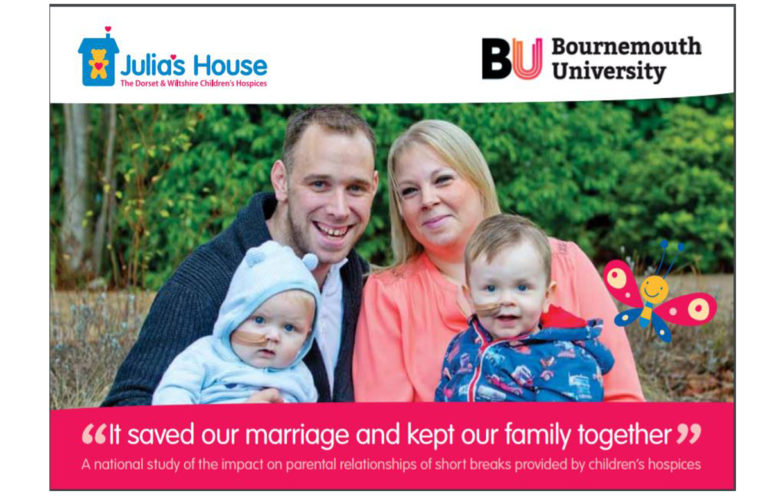 A national report, launched today, 10 October 2017, reveals that 75% of couples who suffered a relationship breakdown had no access to frequent respite care at the time.

The research by Bournemouth University in partnership with Julia’s House Children’s Hospice showed 74% of parents rated short breaks by children’s hospices as having a positive effect on their relationship.

This national study examined the impact that caring for a life-limited or life-threatened child has on parental relationships. Its focus was on the effect that short breaks provided y children’s hospices have on parents’ relationships.

Seventeen children’s hospices from across England and Scotland took part in the research, which was conducted by Ashley Mitchell of Bournemouth University in partnership with Julia’s House, the Dorset and Wiltshire children’s hospice charity.

In its summary the report states, “Caring for life-limited and life-threatened children puts pressure on relationships and, unsupported, some parents’ relationships do not survive repeated emotional and physical strain. The unrelenting, exhausting cycle of care means couples can end up leading separate lives.

Most parents in this study rated short breaks provided by children’s hospices as having a direct, positive effect on their relationship with a partner, giving them rare time together as a couple. Others used short breaks to spend time with their other children or just enjoyed time to themselves, regaining some balance in their lives, ultimately benefitting the whole family.

THe study provides evidence to support the need for an immediate review of Government policy in order to reduce the emotional burden on families, as this frequently leads to parental break-up – and potential economic cost. Family disintegration through divorce or separation becomes an expensive burden on the State. Short breaks provided by children’s hospices should form part of a preventative policy solution.”