Before I die- Public awareness of end of life in Thailand 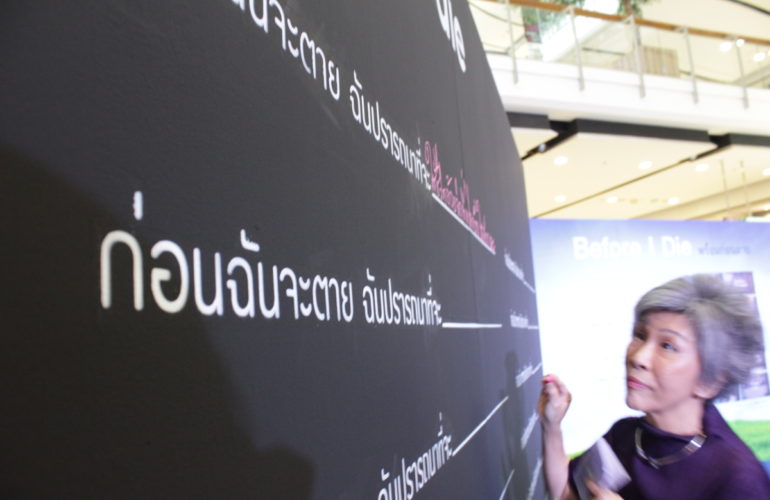 The Thai Palliative Care Society, along with the Buddhist Network for Good Death and champions from Thai society such as Lady Chamnongsri Hanchanlash, is working to change that.

As part of the Asia Pacific Hospice Conference, these advocates are staging a public awareness campaign in the form of a ‘Before I Die’ exhibition. This concept originated in New Orleans, USA, and encourages people to think about the fact that they will die, while framing this in  positive way.

The exhibition has been constructed in a busy walkway of Central World, a five-story high shopping mall in the central business district of Bangkok. Three giant chalkboard walls have been set up, printed with the multiple copies of the phrase: ‘Before I die,’ each followed by a space in which to write. Members of the public are provided with coloured chalk and are encouraged to think about what they would like to achieve before they die and to write this on the wall.

Dr Srivieng Pairojkul, president of the Thai Palliative Care Society, said: “We want the public to be aware: You need to think about dying, it’s not something that is misfortune. You need to think: Ok, what do you want before you die. It is a positive way of framing death. Because in Thai culture, death is misfortune, people don’t want to talk about it. They want to hide it away.”

Ms Wanna Jaiusomboon, working with the Buddhist Network for Good Death, said: “We wanted to open a space to talk about death and dying in Thai society. With this exhibition, we want people to open their opinion about death and dying. It is a space where everyone knows right now what is important for you to do. “

The ‘Before I die’ exhibition certainly opens this space and challenges cultural barriers around talking about death by bringing the discussion out into the open and increasing public awareness of end of life issues.

24 hours after the exhibition’s opening, the wall was covered in writing, with members of the public engaging with the project and offering their contribution.