Media training as a way to amplify patient voices 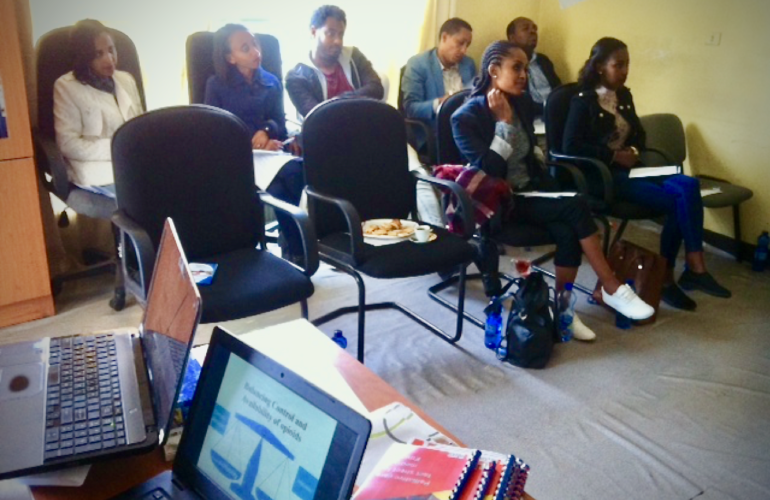 September 2, 2019 | No Comments
Categories: Education and In The Media.

This month, a group of seven Ethiopian television and radio journalists gathered in Addis Ababa to hear the perspective of Kalkidan, a 25 year old patient receiving palliative care. This experience, coupled with an agenda that addressed the state of palliative care in Ethiopia, resonated with participants.

“I had an experience of watching someone very close to me suffering from life threatening illness once. I still feel her pain like yesterday,” said one of the journalists.

“But I never knew that there was such a care provided for those living their lives with their terminal illness. In the midst of the training, I imagined how her life would have been better and peaceful if she had received palliative care back then. I really wished I had known about palliative care before she passed.”

Palliative care was a new concept to all of the journalists who participated in the media training. They perceived palliative care to be a serious and sensitive issue in their community that necessitates a timely and concerted effort to engage the government in advocating for patients with serious health related suffering.

They also indicated that there are numerous patients who require palliative care in Ethiopian society. They acknowledged that if the community has an awareness and strengthened understanding of palliative care, there would be a greater chance for its access and demand by patients under Universal Health Coverage.

The journalists raised a number of interesting questions. Specifically, they wanted to know whether Hospice Ethiopia’s service was free of charge, whether spiritual support would be provided based on the patients’ religion or based on the caregivers’s religious backgrounds. They also inquired whether Hospice Ethiopia had any plans to widen its scope of services outside of Addis Ababa.

These questions were answered by Mr. Abathun respectively as follows:

They also discussed the availability and usage of morphine and the fear that it might cause an addiction among youth if it becomes easily accessible. The workshop’s trainers, Dr. Yoseph Mamo and Hospice Ethiopia’s Executive Director Mr. Ephrem Abathun engaged the journalists in a discussion around balance and usage of morphine in a legal way for the patients in their pain control and management.

Participants were provided with a fact sheet in Amharic for media in Ethiopia that defines hospice and palliative care in the context of the global goals, Universal Health Coverage, and as part of the right to health. An English version of the media fact sheet is available here.

Participants also received flyers highlighting Hospice Ethiopia’s services and posters with World Hospice and Palliative Care Day messaging, showcasing that it is celebrated worldwide and that we mark this day to honor the patients and invoke recognition among all people in Ethiopia.

As the media plays an important role in palliative care promotion, the journalists said were inspired to produce media interviews and documentaries to highlight patient voices to promote the idea of palliative care reaching the community.

Collected feedback from the trainees reflected a common sentiment that the palliative care toolkit is important in Ethiopia and that they are interested in increasing coverage on the topic.

“I have now realized there are many who suffer pain from their life threatening illness and who are in need of palliative care. But most of them are not aware of palliative care and are not beneficiary of it. The community must know about this important and vital issue and we must play a great role on this,” said one of the journalists.

This media training is part of the Patient Power project, a collaboration to increase demand for palliative care under Universal Health Coverage through the amplification of patient advocates.