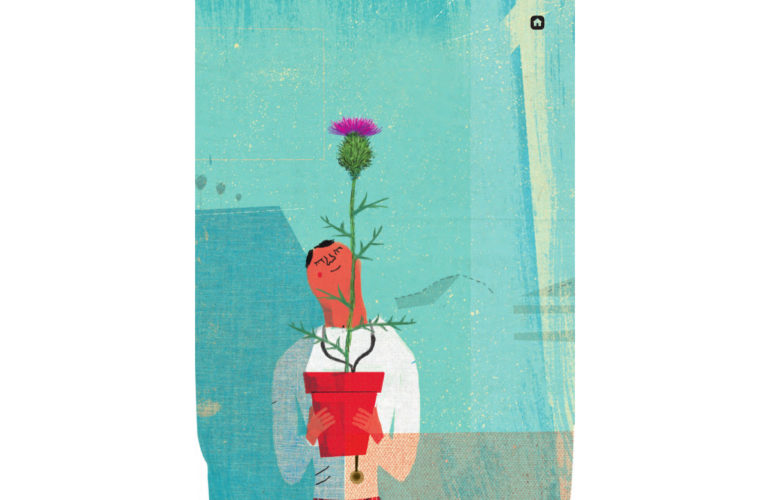 The Scottish Atlas of Palliative Care contains previously-unavailable data on the availability of palliative care services across Scotland. Until now, Scottish data has been encompassed within UK data.

It is the first example of a national atlas of palliative care to be produced anywhere in the world.

The Scottish Atlas of Palliative Care was produced by the Reverend Dr Hamilton Inbadas and Dr Michelle Gilles in a programme led by Professor David Clark of the Glasgow End of Life Studies Group, based at the University of Glasgow’s Dumfries campus.

In a colourful and attractive design, the Atlas contains maps, tables, lists and diagrams, illustrating which services are available in Scotland, at what level, and where.

Reverend Dr Inbadas, Research Associate in the Glasgow End of Life Studies Group and lead author of the Atlas, said: “The Scottish Atlas of Palliative Care presents a picture of the levels of specialist palliative care provided through different types of services, categorised by each health board area. It also offers a useful list of key documents and milestones that capture the development of Scottish palliative care in the areas of policy, education and socio-cultural attitudes.”

This document responds to a commitment in the Scottish Government’s 2016 Strategic Framework for Action in Palliative and End of Life Care, which in turn was a response to the World Health Assembly resolution in 2014 which requires all governments to recognise palliative care and to make provision for it in their national health policies.

Craig White, Divisional Clinical Lead at the Scottish Government’s Healthcare Quality and Strategy Directorate, said: “The Scottish Government has committed to support improvements in the collection, analysis, interpretation and dissemination of data and evidence relating to needs, provision, activity, indicators and outcomes in respect of palliative and end of life care.”

“The Scottish Atlas of Palliative Care will support a range of work in progress to contribute towards our vision that by 2021, everyone in Scotland who needs palliative care will have access to it,” he added.

Definitions of the terms used and the layout of the document are based on those of the existing European Atlas of Palliative Care, making the Scottish data comparable with European data for the first time.

Professor Clark said: “Scotland is not visible in the European Atlas of Palliative Care, and this is something which we wanted to put right. We hope it will inspire other nations to do the same.”

“The Scottish Atlas will be a vital resource for policy-makers, decision-makers and thought leaders across Scotland,” he continued.

Mark Hazelwood, Chief Executive of the Scottish Partnership for Palliative Care, welcomed the document: “The Atlas will be useful to anyone who wants to understand more about the pattern of services likely to be available to people who are faced with the reality of deteriorating health and death in Scotland today.

“It is nearly ten years since the previous attempt to describe systematically specialist palliative care services in Scotland. The background sections, including historic and policy contexts, are a valuable synopsis.”

Dr Gillies, Clinical Lecturer in Public Health at the University of Glasgow, managed the data collection which involved identifying and interviewing service providers and then extracting quantitative data from these narratives.

“This is an opportune moment to reflect on the challenges and opportunities in collecting, collating and disseminating timely, accurate, accessible data on palliative and end of life care provision in Scotland, and to develop a sustainable approach through co-production,” she said.

The team will now analyse the Scottish data and compare it with data from the European Atlas of Palliative Care, to outline gaps and areas for improvement in Scotland’s palliative care provision.