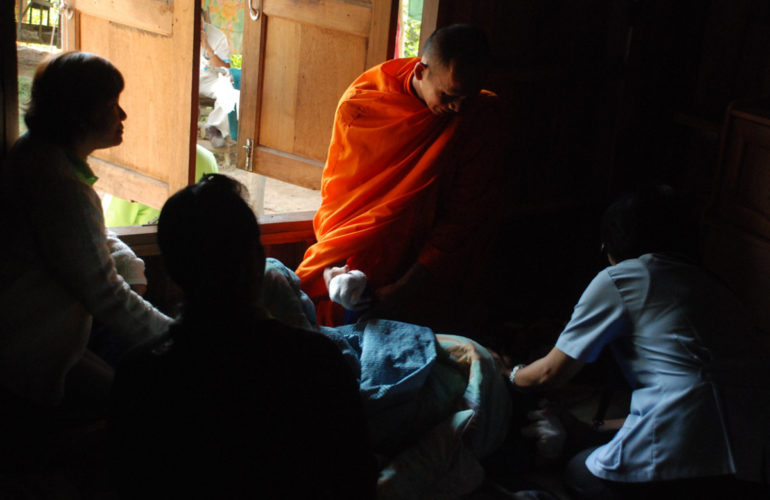 After the 2013 Asia Pacific Hospice Conference and the latest national health policy announcement, palliative care in Thailand has been steadily growing each passing moment.

However, even with more awareness from healthcare providers and the public, palliative care awareness and education in Thailand – especially spiritual care – is still needed more than ever.

Buddhika Foundation initiated the first phase of the project in 2011 to help promote palliative care awareness in healthcare providers, volunteers, and also Buddhist monks – the natural spiritual leaders of the country.

They are now commencing the second phase, running from September 2014 until August 2016.

The main goals of the first phase were to raise palliative care awareness and join together for the same cause healthcare providers, volunteers and monks who were initially working individually to give care to palliative care patients.

After many years of work and various projects such as the Peaceful Death project, they found that even with a compassionate heart and good intention, palliative care workers still need skills and knowledge to better their care.

Thus, the objectives of the second phase are to:

Develop a collective model for palliative care from the multidisciplinary team.

As a Buddhist country, monks in Thailand are usually the spiritual counsellors during patients’ terminal hours.

Those that joined the training course from the first phase are now regularly giving sermons for those who need them, whether this is for the patients or the family so that they could understand the concept of – and ultimately reach – ‘a good death’.

From the healthcare team’s aspect, the nursing team is the main team that gives compassionate care to those who are in need.

Those who have completed the training course are now acting as leaders in palliative care in their respective areas and are expanding their network nationally.

Volunteers, another important part of palliative care, also act as the bridge that connects patients to the community.

The care has now extended to the local level and more local administration teams are getting involved.

Enhance palliative care workers’ skills and knowledge for giving care to the patients.

There will be more training programmes, workshops and also educational materials for the target group. Books, manuals, pamphlets and videos are also available. Train-the trainer courses for spiritual health promoters will also commence this July.

Funded by Thai Health Promotion Foundation, this two year project has already launched in 27 hospitals across the country. 21 more hospitals will join later on this June.

Find out more online, or via email.