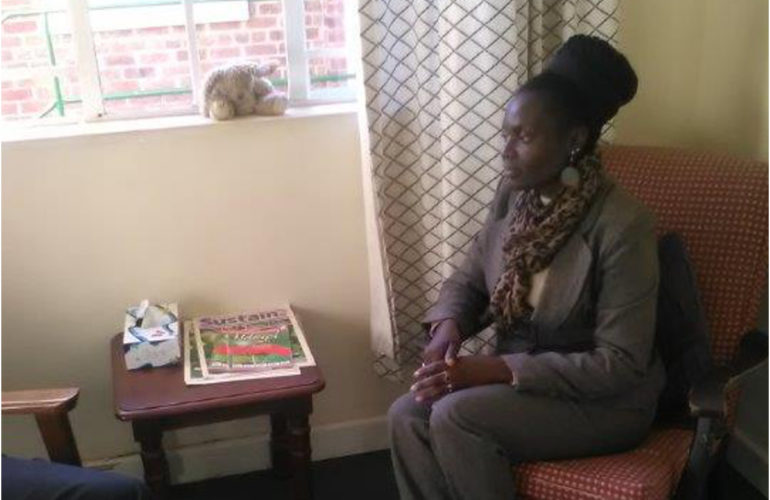 One such patient was Mr Skin* who was referred to Island Hospice and Healthcare (Island) after he had been diagnosed with advanced cancer of the pancreas.

Prior to falling ill, Mr Skin had been a productive employee of a certain local company but had left employment due to illness.

When he fell ill he had decided to retire to his rural home where he was staying with his wife.

Unfortunately his wife died and one of his grown up daughters had to assume the responsibility of caring for him.

His condition deteriorated so much that the family decided to bring him to the city to seek medical treatment.

Mr Skin underwent a series of medical investigations at the country’s biggest referral hospital where he was diagnosed with advanced cancer of the pancreas.

He was then referred to Island for palliative care. Although his condition was deteriorating due to the progression of the disease, his pain was well managed and the quality of his life significantly improved.

A counselling session with Mr Skin revealed that his pain was not simply physical. As a widower and head of the family he was worried mostly about his pension which in palliative care terms is classified as social pain.

He told us that, during his working days, he had contributed to the compulsory National Social Security (NSSA) pension scheme.

In the early days of his illness, he had tried to make claims on his National pension but to no avail.

He and his son who was assisting him had been informed by the NSSA officers that there had been a mix up of his national identity number and the NSSA registration number and that someone had already made claims on the pension.

Mr Skin did not have the strength to follow up the issue with NSSA management as he was already very ill and his son had no resources to pursue the matter with NSSA, so they just gave up and abandoned the issue.

This remained a very painful issue for Mr Skin. He was sleepless and restless. He was very unsettled but acknowledged that he had no physical pain.

He also mentioned in one of his counselling sessions with the social worker that this pension was all he had in terms of savings.

He really was worried about not leaving an inheritance to his grown-up children who were also struggling to make ends meet.

He wanted to make sure that his hardly-acquired core house would be safe from being attached by the law due to the long standing electricity and water debt.

Mr Skin said that if he could get his national pension, he would die a happy man.

The pension was an important symbol of his entire working life and failing to claim it was something that was haunting him a lot.

In Zimbabwe, the process of claiming one’s national pension can be very cumbersome and it was not surprising to learn that Mr Skin had given up on the claim.

This issue needed the practical and aggressive intervention of a social worker who then took up the matter with NSSA.

It took serious negotiations and explanations to convince the officials to reconsider the claim.

The social worker took time to explain to the officials what palliative care was all about and how this social pain was impacting negatively on Mr Skin’s quality of life.

The officials were made aware that his family had several times thought he was dying but he had continued to live.

At one time his condition deteriorated so much that all his close family members from his rural home gathered in anticipation of his death.

One could see that there was something that was deeply troubling this man.

Having understood the role of palliative care for patients with a life-threatening illness, the NSSA officials then requested Mr Skin to start the claim process all over again.

This had its own challenges as Mr Skin was now very frail and not even communicating.

Fortunately, he did not have to say anything as all the required information was provided by his eldest son.

The social worker followed up the claim tirelessly and constantly highlighting to the officials Mr Skin’s continuously deteriorating condition.

The officials were amazingly cooperative. The pension claim – which usually takes between three and six months to be processed – was processed within 25 days.

Upon receiving the news that the pension had been processed and the money deposited into his bank account, the frail Mr Skin bounced back to life.

You should have seen him, lying on his small bed smiling and shedding tears of joy!

It was as if he had been injected with a ‘life-enhancing’ drug. He was now able to communicate and immediately ordered his elder son to go and pay off the long-standing electricity and water debt, buy some groceries and just celebrate with the whole family. There was so much joy in the family as their quality of life improved in all aspects.

Six days later, Mr Skin died peacefully at home. He died a happy man too because he had managed to settle all his debts – thus dealing with his unfinished business.

In other words, Mr Skin had been finding it difficult to exit this world without having settled his debts. Hence his peaceful death as soon as everything had been settled.

This was what we call ‘a good death’. Many patients who have awareness that death is imminent often complete certain tasks to allow a peaceful death.

The skillful and resolute intervention by the Island Hospice & Healthcare social worker helped Mr Skin to settle his affairs and to die a good death.

Island Hospice and Healthcare have recently launched a new website, make sure you visit the site to keep up to date with their work.