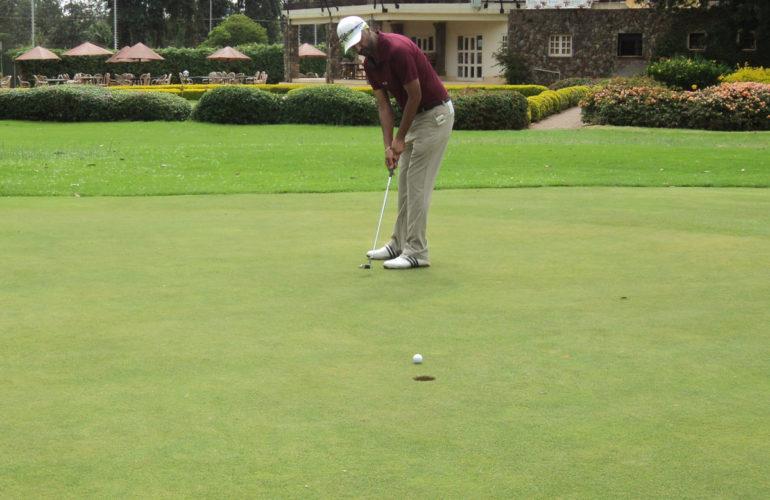 May 6, 2013 | No Comments
Categories: Community Engagement.

“Let us dig dipper into our pockets and support hospice work because they are doing a great job.” This was the message to over 100 golfers and supporters who took part in the Nairobi Hospice charity golf tournament on May 3, 2013 at the Karen County Club.

Speaking after the tournament, the Kenya Association of Hotel Keepers & Caterers (KAHC) Chief Executive Office Mr. Mike Macharia said the work done by hospices is a calling, and not the monetary package attached to it.

“When we started this partnership 10 years ago, I never knew I would need their services at some point in my life. I was wrong because I had a cancer patient who benefitted a lot from palliative care.” He said.

Mr. Macharia said that the patient passed on early this year but the overwhelming support received under palliative care eased the tough times they were going through.

“We hope to do more in the coming year as we keep up the support we are giving to Nairobi Hospice.” He said.

The KAHC CEO said that they get money from their members and use some of it in charity, adding that Nairobi and Coast Hospices have been the highest beneficiaries so far.

Addressing the participants on behalf to the Nairobi Hospice CEO, Mrs. Laelia Anderson, Hon. Secretary to the board, said they endeavor to get the patients early because there is a lot that they can do to them at such a stage.

She said that the hospice staff counsels patients and their families as well as listening to their numerous concerns that surround the family during end-of-life times.

“You can continue to support us in other ways especially by making others know what we are doing.” Mrs. Anderson said. Our idea, she said, is to put life into their days and not just days into their life.

She thanked the top staff for supporting the fundraising as well as to the participants for sparing their precious time to take part in the charity tournament.

Dr Donald Aboge from Nairobi Hospice said that they are able to see patients at their homes within a radius of 20km, besides carrying out palliative care in hospitals.

“Most patients come to us when they have exhausted their finances while trying to seek treatment for their ailment. This means that they have financial challenges that we need to address.” Dr Aboge said.

He said that this is one of the reasons why they carry out such charitable event to raise money to cater for the patients’ treatment and therapy as they make their end-of-life comfortable.

Dr Aboge said that as their motto states, ‘put life into their days and not just days into their life’ they are engaged in alleviating pain which is the major hindrance to comfort which comes with most life limiting illnesses that their patients suffer from.

Out of the over 100 participants, Emmanuel Agengo emerged the winner with 42 points followed neck to neck by David Onyonka with similar points. George Kuria came third with 39 points.

The event ended with a draw of the raffle tickets that were on sale that saw several participants and well-wishers win various prizes including breakfast, dinner and tour vouchers.

Nairobi Hospice Fundraising Officer M/s. Eunice Mwangi said she was happy with the turnout, thanking all the supporters for making the day a success after a lengthy period of logistics in preparation for the event.