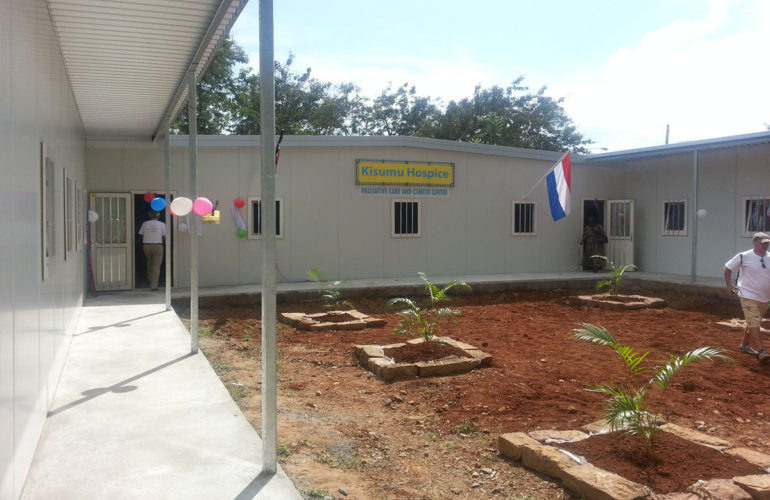 The official opening of a new building for Kisumu Hospice and Palliative Care Centre, located in the Jaramogi Oginga Odinga Teaching and Referral Hospital (JOOTRH) complex on 1st November 2012 will always be a memorable day for Kisumu Town, located in Nyanza Province in Kenya.

Nyanza Province has a population of about 5 million people, with one of the highest HIV Prevalence at 15%.

Kaposi Sarcoma and Cancer of the cervix are among the common cancers reported in the Province.

“Kisumu Hospice was the 3rd hospice to be opened in Kenya in 1998. The first Kisumu Hospice was a small little room in the provincial hospital. It could barely accommodate three people.  The doctor would have to leave the room if the nurse wanted to be with the patient alone and vice versa.” The Chairman of Kisumu Hospice, Dr Julius Onyango, narrated during the launch of the new hospice building.

Dr Onyango is the first radio-oncologist in Kenya and was involved in setting up the first hospice in Kenya in 1990.

The hospice later on moved to a more spacious area behind shops on one of the streets in town. The Bhayani Family, a Kenyan-Asian Family, donated this space. The hospice has been operating from this building for over ten years.

Realising the need for a better-placed and spacious hospice, the Kisumu Hospice Board, under the leadership of Dr Onyango, embarked on a mission to get the government of Kenya to donate land for them to build a patient and family friendly hospice.

Three times, different pieces of land were allocated, but they were all grabbed. Finally, the provincial hospital, now known as Jaraomogi Oginga Odinga Teaching and Referral Hospital, through the cooperation of the hospital administrator, Dr Juliana Otieno and the Provincial Director of Medical Services, Dr Lusi Ojwang, donated space for the hospice to built a new hospice centre.

Despite having land to build their new centre, the hospice had no money. Efforts to fund raise locally were not very successful.

Nevertheless, where there is a will, there is a way. Nairobi Hospice Holland Foundation, who have been supporting hospice work in Kenya, Tanzania and Malawi offered to build the hospice with their own money. Not only did they finance the building, but also physically build it themselves. They prepared the building materials in the Netherlands and shipped them to Kenya.

However, they encountered obstacles once the materials arrived in Mombasa as they had to pay over 2.5 million Kenyan shillings for taxes, storage and clearance after failing to get tax exemption from the Treasury despite a request by the Ministry of Medical Services.

“Mr Jan Gort (Nairobi Hospice Holland chair) was determined that the hospice building would be completed on time. He called his family and friends in Holland and was able to raise the funds needed to pay the tax and clearance. Once the goods were cleared, it took him and his team from Holland 8 days to put up the hospice. They worked tirelessly everyday and kept a cheerful atmosphere all throughout”. Mrs. Rosemarie Okwaro, the Kisumu Hospice Board treasurer says.

Nairobi Hospice Holland is a foundation that started in 1991, when a team of tourists from the Netherlands stumbled upon a Nairobi Hospice activity to raise funds. These well-wishers have since then supported Nairobi Hospice, Nyeri Hospice, Coast Hospice and Kisumu Hospice, mainly with drugs and equipment. They also support a hospice in Tanzania and Malawi. They have also supported communities in Western Kenya by building schools and polytechnics.

“We are humbled to be of assistance to palliative and hospice care in Kenya and other parts of Africa. Our motto is Care can always be better,” says Mr. Jan Gort, who is the Chair of Nairobi Hospice Holland.

“Although we started off with Nairobi Hospice, which is where our name comes from, we realised the greater need and extended our support to other hospices, especially in the rural areas. This is not easy with the recession, but we are trying our best”. Mr. Gort adds.

The new Kisumu Hospice and Palliative Care Centre building has 41 rooms, including a board room, a lab to enable testing for HIV/AIDS as well as other necessary lab procedures, and a fully equipped kitchen to cater for day care.

The Provincial Director of Medical services Dr Ojwang Lusi, promised that he would give support to the hospice by seconding nurses to the hospices while the director of JOOTRH, Dr Juliana Otieno promised to be equally supportive.

“We need to work together with the hospice to ensure continuum of care for our patients. Most times, we forget their psychosocial needs. We have to work together to provide the much needed holistic care, from pain management to counselling” Dr Otieno Says.

JOOTRH has a palliative care unit and has started integrating palliative care services, a project that Kenya Hospices and Palliative Care Association (KEHPCA) and the Ministry of Health have been working on: to integrate palliative care into the government hospitals.

The Kisumu Hospice and Palliative Care will also serve as a Cancer Centre within the hospital.

The Centre hopes to eventually offer radiotherapy and chemotherapy services as well as working with various Oncology Specialists in the Hospital.

“We intend to rent out some of the rooms to doctors so as to generate funds for the hospice for self sustainability,” says Dr Onyango.

Kenya Hospices and Palliative Care Association wishes to congratulate Kisumu Hospice for the great work they are doing and for launching their new centre. May it touch many hearts.