Care Patients inspirer gives hope and strength to others - ehospice

Patients inspirer gives hope and strength to others 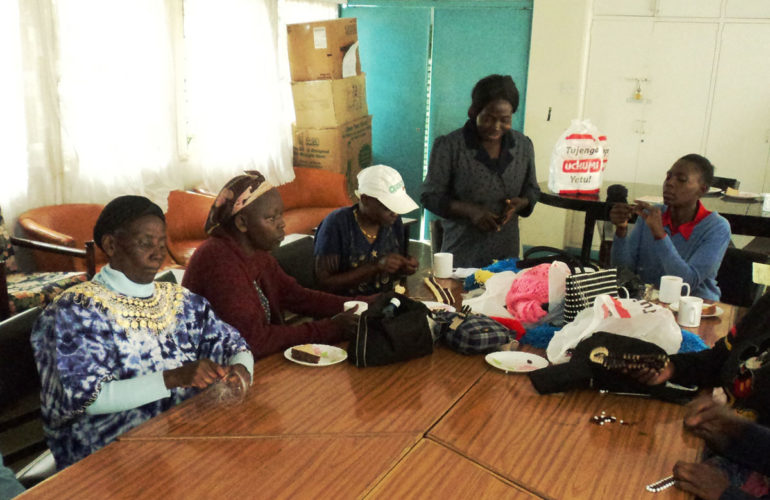 If you walk into the daycare session at Nairobi Hospice, there is one distinct voice you hear moderating the patients present and advising them.

The jovial mood shinning all over her face may mislead you to think she is not one of the patients but a nurse or counselor who instills comfort as they fight their diseases.

It is until you hear her side of the story to understand that she has endured it all and she understands the need to constantly keep a patient jovial giving her/im hope and support.

Coming to the hospice every Thursday from Kibera, one of the largest slums in Africa, Truphena Jagemi was diagnosed with colon cancer in April 2009.

The initial signs that led to this diagnosis started back in 2007 with occasional pains on her arms that could end after a short period.

“I later started having stomach aches that could not let me neither sleep nor sit but only kneel. I suspected typhoid or ulcers and sought treatment.” Mrs. Jagemi said in an interview.

She said that she underwent several scans but nothing could be identified as a problem with her stomach despite the pain she suffered.

“A friend of my children advised me to go to Kenyatta National Hospital (KNH). On arrival at KNH, my stomach snapped to pain and I was taken to the emergency ward.” She narrates.

She says she was put on typhoid treatment with dosages that she had to change often as she felt no improvement on the pain that kept disturbing her stomach.

With consistent pain even after medication, Mrs. Jagemi was advised to go for an x-ray at Kenya Medical Research Institute (KEMRI) where she was required to pay KES. 7,000 an amount beyond her financial reach.

“When the figure was mentioned, I kept quiet and asked myself where I could get such an amount of money to get an x-ray of my paining stomach.” She said.

Mrs. Jagemi said that a lady friend at KEMRI whom they attend the same church called her to their offices at a later date.

“She told me to eat something little before going. I asked of any cost that I needed to foot but she told me not to worry but go. I did that and headed to their offices.” She said.

Once at the office, Mrs. Jagemi said she got to see a doctor and was given an injection only to wake up several hours later to find the x-ray ready.

“I was told to go direct to KNH. On arrival, I was required to take another x-ray of which a friend of mine settled the bill after explaining the situation.” She said.

She said she was released to go home while her stomach pain agony continued till she came back for the results.

“Up to this time, no one had told me what I was ailing from but I say it is better they did not because I could be shocked to death during the operation.” Mrs. Jagemi said.

The doctors asked her if she was the one who had signed the papers of which she agreed before she was put on anesthesia.

She said she wondered why the theatre bed was spread with a black sheet, just like the way coffins are covered in Western Kenya, her rural home.

“I lay there and whatever happened I did not know until the following day when I was awoken around 10am. I tried to recall where I was.” She narrated.

She was told to wait for a few more days for some tests to be done and when results were ready she sought to ask what she was ailing from and the doctor informed her that she had colon cancer.

“I cried all the way home knowing this was the end of my life and my children would suffer from then henceforth. I shared the information with my sister who wondered how I could go to theatre without a clue of what I was suffering from.” She said.

The doctors at KNH referred me to the chemotherapy department where I started treatment though finances were still a challenge. Booking a bed, according to Mrs. Jagemi, was difficult due to the high number of patients scheduled for chemotherapy sessions.

“I had to sleep at Kenyatta to secure a booking and finally managed to commence my chemo which progressed positively plus some expensive drug prescriptions.” Mrs. Jagemi said.

She added that she had to look for alternative advice from other clinics in the city and at the beginning of 2011, somebody from one of the clinics referred her to Nairobi Hospice.

“The first time I came, I was welcome warmly and given tea and bread as well as a good lunch but since I do not take milk tea, I thought this was not the right place for me. I stopped coming.” She said.

Mrs. Jagemi continued to narrate how Nairobi Hospice followed her up and invited her to the daycare held every Thursday.

“It was the first time to discover that patients with cancer do meet and share their illnesses and enlighten others. Initially I used to say hello and sit down.” She said.

The jovial Truphena said that she has since gotten the courage to face her colleagues and strongly challenge their fears, pushing for strength and encouragement to fight their diseases with positive messages.

She acknowledges that the energy she received from other strong patients from the group has seen her live as if she was never suffering from cancer.

“I remember one day I came for the daycare feeling a bit weak but I asked God to give me the strength not to show the weakness to other patients and that is what He granted me as I managed to carry my jovial mood all through that daycare session.” She said.

Nairobi Hospice supports Mrs. Jagemi with drugs that keep her strong and the few food materials from well wishers which they share to patients keep her and other patients strong and willing to come each Thursday to share their progress in the spirited fight against their illnesses.

“When I wake up I say God is good. Some time patients come here crying about the financial burden to treat their illness and what I do is laugh at them. I ask them why they are crying yet they are living. I talk to them and tell them God who gave them the illness will provide ways to handle it. After a short while they get composed and become stronger despite what they are ailing from.” She narrated.

She advises, “Do not be shocked as this will lead to more complications. Just believe that God has a way around your illness and you will be strong.”

The daycare makes her feel easy once she shares with the patients and encourage them to be strong.

“I am always given this chance to give motivation to the patients and I believe this is a maiden chance I have and I do not take it for granted. I always try to come and moderate the daycare since most of the patient appreciate what I have done for them.” She said.

She said that up to now, it is only her sister and husband who know what she is ailing from as she does not want her mother and children to know that she has cancer.

Mrs. Jagemi intends to have some of her children accompany her to the daycare soon so that they can slowly learn about cancer since they are not aware that she a patient of this dreaded disease.

Her advice; Be strong and the disease will relent.